What does it take to be a stand-up comedian? It’s not easy, says Aditi Mittal, but she loves performing on-stage and making people laugh! 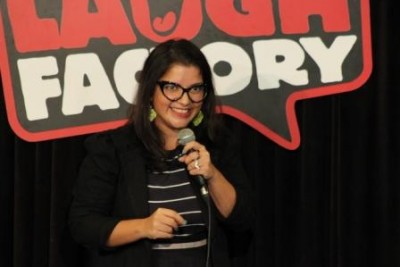 What does it take to be a stand-up comedian? It’s not easy, says Aditi Mittal, but she loves performing on-stage and making people laugh!

Aditi Mittal is a stand-up comedian, actress, voice-over artist and teacher.  She is a regular at The Comedy Store, Mumbai and has been ranked one of the top ten Indian comedians by The Times of India.

How did you know that stand-up comedy is what you wanted to do?

Aditi Mittal: I still don’t know. In fact my parents are still hoping that this “comedy ka bhoot” will go away and I will get a real job. But truthfully, I am SO grateful to be able to do what I do. It’s hard to have a bad day when you’re standing in front of a group of people who are laughing their guts out at something you said. I LOVE my job.

What were you like before taking up this profession – did people think you were funny? Did you always have the ability to make others laugh?

Aditi Mittal: I was always a bit of a nautanki. I went to an all-girls school and I realized that someone had to take on the mantle of class clown, so I bravely and honourably did that for all 12 years of school life. I remember switching school in 9th standard and I was terrified at the thought of not making any friends. So I watched Kaho Na Pyaar Hai, memorized the entire film, dialogue for dialogue and started enacting it for people on the 1st day of class. I got friends and punishment in equal measure that day. Even now when I meet school friends, they say things like “Oh we’re not surprised you were doing this, what else were you good at yaar?” It makes horrifies and flatters me at the same time.

How do you prepare for a show? Do you improvise a lot?

Aditi Mittal: Writing, writing and some more writing. Most material is prepared, though a LOT of situations come up that require you to be quick on the ball. It’s an 80-20 percentage.

A lot of comics have a drink to loosen up before a show. I can do no such thing. At least an hour before I have to get on stage, I stop drinking and eating, I’ll have a mike in front of my mouth soon, and I don’t want to do something like burp in to it. The audience is not paying to hear me digest my food you know?

Does being a woman impact the kind of comedy you do? Are there certain things that are out of bounds, or come more easily?

Aditi Mittal: Of course, it colours everything about what I do. I AM after all a woman.

To me, comedy is about the truth, about laying your soul bare and hoping that people will see what’s funny in it. So of course it has an impact on my comedy. Yes, there are certain things I approach more cautiously because of my own prejudices. I am after all an Indian woman, and God knows we come with our own baggage :D. I don’t want to make a sex joke for the sake of making a sex joke.  But personally, I think nothing is above humour if it tells the truth and makes you think. If it makes a point or says something true, that’s when I feel comfortable saying it.

Are organisers ever hesitant about booking a woman? Does it impact audience reactions?

Aditi Mittal: You know the card plays itself both ways. Sometimes organisers specifically want a female comedian to “sexy up” the line up a little bit. 😀 And sometimes they avoid female comedians because of the misconception that women are not funny. Though, personally the logistics of it don’t bother me. I just want to be out there performing as much as possible. Getting more stage time, getting more experience and honing my skills. It’s not a competition with anyone else but myself.

To audiences, I’ve noticed that gender does not matter; if you are funny they will laugh. And that’s what matters.

Is it a career option – is there scope to earn a living doing stand-up comedy in India?

Aditi Mittal: Yes, now there are tons of comedians who also produce their own shows. But most comedians have other jobs as well. Life would be very boring only if we went from show to show. It’s important to have a productive life outside of the stage. It’ll help you with the material you write. I teach and write as well so it keeps life interesting.
But for anyone starting out, I suggest you don’t quit your day job. 🙂

How did you get your first break? How does one go about getting that first opportunity to perform?

Aditi Mittal: I was one of the first 5 Indians to be picked up to perform at The Comedy Store, Mumbai, (now, Canvas Laugh Factory). I remember doing a show in which Prasoon Joshi was in the crowd. I forgot every single joke, and just muttered something for 3 minutes, My mind has blotted out the rest because it went so badly. I think I blew my first big break. But there was no going back after that, I was addicted to the thought of doing stand up comedy. So I went back to the open mic circuit. And spent almost a year more, honing my jokes, and learning to not be scared while I was up there. It paid off when I was a part of the first “Local Heros” a show that featured the first wave of Indian comics at The Comedy Store. One of the happiest moments of my life for sure.

Getting into the comedy space right now is a two sided beast. Even though there are many more platforms and open mics to be able to practise your craft, the number of people trying to break through the scene has increased exponentially thus making it harder. But I still stand by the notion that if you are funny and sincere and do your best, you will automatically be able to rise to the top.

How does someone with talent and interest acquire the necessary skills?

Pay attention to small things around you, have a place where you can make notes on the go. And most of all be sincere when you’re up there. Stand up is difficult because it’s one person with a mike. There’s no background music, dancers, costumes. You are up there literally bare in front of the crowd. Audiences are very perceptive. If they know you are not being sincere they can sense it. If you are nervous they can sense it. And they get nervous for you. So don’t be nervous. They are all on your side.