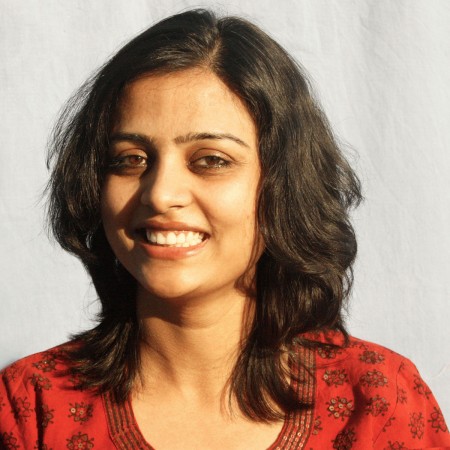 Aditi, 29, an engineering graduate and a New Media Design post-graduate from National Institute of Design, Ahmedabad, started Menstrupedia in November 2012 along with her husband. What started as a four-week classroom project turned into a cause for life.

Tell us how Menstrupedia came about.

Aditi Gupta: I spent my teenage years too embarrassed to buy sanitary napkins or discuss menstrual troubles with anyone. Like most young girls, I started menstruating at age 12, but only learnt what periods really were at 15 in Class 9. Even then our teacher skipped the chapter, telling us to read it on our own. The lack of information took me to a point where I started believing and following menstrual myths.

After 13 years and despite all the education, I was at the same level of awareness. I used to get lot of cramps and troubles during my periods. It was during my post-graduation days that my boyfriend (her husband Tuhin) used to browse the internet to find solutions to my menstrual troubles. During our discussions on one of the class assignments, we realized that there was a lot of scope, both from content and design angle to take up menstruation as a topic for my project.

Then during my final year thesis project, I did extensive research, gathering information from doctors etc. I collated questions from girls and the idea of a comic book and user guide came in. So we developed a comic book with four main characters (three young girls and one elder didi – the expert, a doctor). It was tested and then later put up on a website.

While I started working as a professional for designing educational materials, our website was still out there and was gaining momentum. A lot of the visitors on the website said that 80% of the information was new to them. It brought home the fact that even educated people lacked awareness. After two and a half years, in November 2012 last year we (me and my husband) started Menstrupedia in order to reach out to more people.

So today what you see is a website providing information on puberty and sexuality for pre-teens and teenagers. Since it went live a year ago, it has received an average of 25,000 visitors a month from 195 countries, with readers from as far as Canada and the Philippines.

How did people react?

Aditi Gupta: When the ‘Tales of change’ came out, we realized that apart from lack of awareness, there was a commonality in the stories that surrounded the issue. Everyone had gone through the same cycle. I started the initiative because personally I had gone through a lot. In my family, the idea was not at all welcomed by elders around us. I had got this high-paying internship in Mumbai, which I left and came back home to start this. The one word I could not share with my parents was that this was to become my career. I remember aunties around giggling when I spoke about what I was doing. Things changed slowly, and today, my mother keeps a copy of the comic book with her and shares with everyone around. This was a change at home.

After we launched, it was amazing how we used to get at least one mail every day from strangers all over the country and abroad telling us how much they love the website. It was well received by media people too. The positive reactions are a validation.

I would like to share one email I got from a single father who shared the troubles he faced as her daughter attained puberty. He asked his neighbor woman to explain the menstruation process to his daughter but that didn’t help. For him, the website did wonders, giving information to him and his daughter. I realized after the email how important it was to initiate dialogue on the topic.

Being on social media (Twitter, Facebook) helps us get feedback. One of the Tweets from a Hindu religious leader was this: “They might be doing good but they don’t know anything about religion”. Culturally, women are considered impure during periods, so criticism is bound to happen. The impact of branding girls as impure at such a tender age can have lasting impact. Breaking such myths from the start is important to develop a healthy attitude towards what is a natural biological process.

We get questions of all kinds, from worshipping during periods to primary amenorrhea, sanitary napkins and menstrual cups. The issue of puberty and menstruation is interlinked and solving queries of both the sexes is crucial, which we are trying to do.

What is Menstrupedia currently doing? What next?

Aditi Gupta: If one looks at the website, you will see we have different activities to target the issue. On the website there is a Quick Guide section which talks about puberty, menstruation, myths and hygiene Issues. The other section is Q&A. The blog, where writers share their stories and information, is a big part. For example, Monica who wrote the first blog for us told us how after her article, her principal had expressed her respect for Monica. Apart from the blogs, there are resources that include animations and videos to present information visually.

Apart from this, an extension of the Tales of Change comic book is what we are developing right now. The 100-page book is to be launched in January 2014. The two of us, along with a part-time technical person, a doctor as a guide and a few others, are trying our best to bring out a clinically accurate comic book. For this, we launched a crowd funding initiative where individuals and NGOs donated. In  3 months, we had 175 generous donors from 85 cities. We wanted to raise 4 lakhs for the comic book and we were able to raise more then 5 lakhs. This reinforced our faith in working towards the cause.

Long-term plans include making the quick guide for fathers, teachers and boys too. Also, on our agenda is developing an audio-visual comic version for tablets/desktops in English and Hindi. We are keen to develop Menstrual Cycle Trackers App for women to use too.

Can you tell our readers about Menstrupedia’s success in creating awareness and the impact?

Aditi Gupta: In reaching communities, our initial comic book prototype (from Tales of change) helped a lot. When we launched the crowd funding campaign, some NGOs and individuals wished to have a copy of the comic to be used in the field. We shared it with them and today, NGOs like Protsahan, Delhi, Munshi Jagannath Bhagwan Smriti Sansthan, Uttar Pradesh, Instincts, Patna, Kutwahi village, Kanha, Madhya Pradesh and 2 Buddhist monasteries in Ladakh have used our material in various spaces. For me, that is a success that while we are here developing the content, there are people out there trying to take it beyond web users. It is reaching beyond our expected target audience.

The monasteries in Ladakh are an example – Ina Mondkar, used “Tales of Change”, to educate nuns in Chulichan nunnery in Rizong and Choglamsar nunnery while she was volunteering there. She described the reactions after the girls went through the comic as a major change in the way they saw their bodies. While this exercise clarified their ideas and beliefs about menstruation, it also helped her to get over her hesitation to take up such a sensitive issue.

Today, boys/men come to me and say that even if they don’t ‘like’ our Facebook page, they actually follow the initiative and introduce their (female) friends, wives and cousins to the website for them to learn from. We are reaching more people day by day and breaking the myths of menstruation every minute. It is such a satisfying feeling to see that the problems which I faced will no more be an issue for those girls who are informed through Menstrupedia. I wish to see a more conducive environment for girls to cherish the blessing that helps them become mothers, instead of feeling ashamed about it.