Mumbai’s Bar Dancers And The Mafia That Gave Maximum City A ‘Glamour Quotient’!

Mumbai’s dance bars were a place where bar dancers who were mostly underprivileged women, could make money and challenge the life fates had dealt them.

Tara is a bar dancer. Her father sold her into a Mumbai dance bar when she was thirteen years old for the price of a few bottles of whiskey. The bar is now the only home and family she knows, but she’s trying her best to get away from it.

You’ll meet her if you open THE BLUE BAR, my literary crime novel set in India’s maximum city. You’ll meet others like her in a few Bollywood movies, Chandni Bar being the most prominent of them, where Tabu masterfully brings to life the trapped and conflicted life of a bar girl left to the mercies of the bar owner, the mafia underworld, and the police.

Opinions differ, but dance bars in Mumbai began in the 1970s, when Mumbai was still called Bombay. Basically, they were places where women would dance suggestively to Bollywood numbers— songs from Bollywood, ‘Bombay’s Hollywood’.

Some of it was the result of dance bars seen in places like Dubai, where many Indians had moved as migrant labor. They were lonely and appreciated these nightspots where a woman would dance to entertain men. Some of these trickled back to Mumbai, where the cabaret and mujra culture had existed since colonial times.

Who were these bar dancers?

Women from dancing communities across India, where entire families depended on the income of the daughter, joined the newly-opened dance bars. Indian men were not comfortable with public nudity, so the women wore traditional clothing like saris and ghaghra choli. They danced on the stage, and could choose to stay there, and avoid any physical contact with the customers. Men showered them with currency notes to show their appreciation.

If a woman decided to work only as a bar dancer and not meet with men after hours, that remained her prerogative. Most bar owners were content to have the bar girls dance, and did not force them into activities they didn’t want to participate in.

The Parsi and Sindhi community established the first clubs. Sonia Mahal, possibly the first of its kind at Nariman Point was opened by an elderly Sindhi businessman, named Mr Jagtiani. It soon became a haunt for gangsters, where deals were made and broken. Soon, the Shettys moved in: glam dance bars opened up in the eighties. Bikini-clad women began to gyrate to Boney-M, and money was showered on them using mini-fans. Some of the top bars included Samundra dance bar in Mumbai Central, Sangam at Prabha Devi, Baywatch at Dadar, and Topaz, on Grant Road.

One of the topmost bar dancers at Topaz was not a woman at all, but a man dressed as a woman who drove men crazy. Tourists from all over India, and across the world flocked to watch this dancer, and as of last year, rights to this dancer’s life-story have been bought for a Bollywood biopic.

The dancers occupied a liminal space between respectability and prostitution. Some went on to make enough money so as to face income tax raids, and were caught in the dragnet between bookies and cricketers. Mumbai’s mafia, the folks into stuff like guns, prostitution, smuggling, drugs, had money to burn, and some of the dons were known to drop upto 100,000USD on their favorite bar dancer in a night. This was in the 90’s and into 2000, the glory days of dance bars. A few bar dancers made more than a crore and left the profession to reinvent themselves as hostesses or make-up artists.

Even the everyday bar girls made upto 25,000 Rs a month, a not-insignificant sum for someone from a poor, often rural background, and quite comparable to salaries drawn by educated employees in office jobs. Bar dancers became glamor icons, not at par with Bollywood actresses, but certainly more accessible to the shopkeepers and businessmen who, after a long day of work, wanted a woman to flirt with them. The bars played host to men from all strata of life, from diamond merchants to taxi drivers, from drug addicts, to regular, office-going householders.

Many Bollywood movies portrayed these dance bars through dance numbers like in Dil Aashna Hai, English Babu Desi Mem, Shootout at Lokhandwala. This was a continuation of the traditional mujras or the Westernized cabarets sequences. The ‘bad woman’ or the ‘vamp’ often drank alcohol, and ‘danced suggestively in front of strange men’.

The dance bars, the mafia, the underworld – it was a complete ecosystem

Dancers and dance bars gave rise to an entire ecosystem around them: from the owners, to the waiters, the bouncers, the tailors who made the costumes, the fake jewelry suppliers, the kitchen staff, all the way to snack and paan sellers right outside the premises. At the height of popularity of dance bars, an estimated 150,000 people found employment in this ecosystem.

Some in the Mumbai Police reportedly turned a glad eye towards these places and collected bribes each week from all the bar owners. Many had dubious relationships that involved Bollywood stars, businessmen and bar dancers. Crime, nepotism and glamor collided in the corridors of dance bars, and created a parallel system of conducting ‘business’ all its own.

Ban on dance bars took away these women’s livelihoods

All of this came to an abrupt halt in 2005. Morality police, state politics, and personal agendas got involved, and dance bars were banned. Showering currencies on women was declared an obscene act. While the misogyny in the gesture of showering women with money was undeniable, this law forced many bar dancers into prostitution. Overnight, thousands of bar dancers, some say up to 70,000, lost their jobs—as did so many other men and women employed in the bar dance eco system.

Dance bar licenses were not renewed, and for the next ten years, Mumbai dance bars fell on hard times. Some of those re-invented themselves into ‘orchestra bars’ where women could sing or wait tables, or even simple restaurants. The visits to these bars dropped, as did the earnings of everyone involved in the profession. Many of the top bars fell into disrepair and are today shrouded in oblivion.

India’s Supreme Court did the lift the ban on Mumbai’s dance bars a few years later, but with new obscenity laws and fear of fines, not many dance bars re-emerged. The heydays of the dance bars were now over. Bar dancers, mostly poor, lower caste women, were no longer in vogue.

Mumbai had moved on, and now Bollywood ‘item numbers’ ruled the roost. More upper caste women moved into these roles in Bollywood movies, thrusting their bodies at cameras, and getting the nation dancing to their tunes. Bar dancing had just begun to revive with new changes in law in 2019, but then COVID stopped the world. 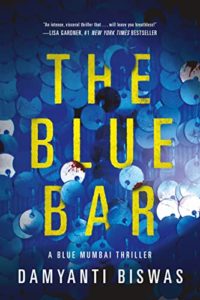 Whether dance bars manage to reinvent themselves in today’s Mumbai, with its frenetic pace, ebb in overt mafia activity and its plethora of entertainment, remains to be seen. Like in any buzzing city with a strong glamor quotient and financial mettle, Mumbai’s nightlife has a colorful history. Mumbai’s bar dancers were its highlight for a decade or two, and during that time, they managed to leave an impact on Bollywood and Mumbai’s cultural landscape.

In the words of a famous Mumbai bar dancer, “People or professions aren’t bad, it is perception that makes them bad.” Depending on whose opinion you pay attention to, Mumbai’s dance bars were dens of amoral activity, or a place where underprivileged women could make money and challenge the life fates had dealt them, with a few moves of their own.

If you’d like to preorder / buy The Blue Bar written by Damyanti Biswas, use our affiliate links at Amazon India, and at Amazon US.

Image source: a still from the film Chandni Bar and book cover Amazon

Register at Women's Web to get our weekly mailer and never miss out on our events, contests & best reads - you can also start sharing your own ideas and experiences with thousands of other women here!
women at workworking women

Damyanti Biswas lives in Singapore. Her short stories have been published in magazines in the US, UK, and Australia, and she helps edit the Forge Literary Magazine. Her debut crime novel You Beneath Your Skin read more...