Working As A Waste Picker, Indira Dreams Of A Better Future For Her Kids

"Proud to be of real use to society," says Indira, an informal waste picker in Bengaluru. A spotlight on the importance of the work done by the community, that needs to be recognised.

Indira was just 5 years old when her father passed away, and started wading through Bengaluru’s waste to earn a meagre income, at the tender age of 10.

Born and brought up amidst Informal Waste Pickers from the under-privileged Cement Colony on JC Road, Bengaluru, Indira lives in a family of six, with her husband and four children. She and her husband are the only bread-winners in her family and have successfully managed to put their children through education, ensuring a break from the vicious cycle of poverty.

Indira is one among the 22,500 Informal Waste Pickers plying their trade in the city of Bengaluru, ensuring the waste on the streets gets cycled back into the recycling economy and save them from further adding to the polluted landfills.

“We used to collect a lot of iron scraps, glass pieces, liquor bottles, timber and bones, when I started picking waste. We now see a lot more of plastic waste in society in comparison”, said Indira, when asked about the difference in the waste collected from earlier.

She also highlighted how she and her fellow waste pickers used to visit popular meat-eating areas in Bengaluru, to forage through discarded carcasses to collect the bones. She further explained the tedious process of sorting the collected bone, how she had to dry them in the Sun, so they don’t get infested by maggots.

Indira also mentioned how the concept of upcycling is inherent to the waste picking community, citing an instance from her childhood, where they used the discarded liquor bottles as makeshift lamps in their homes.

A hard life with a stigma, but things have improved

She added, that the stigma she faced from when she started collecting waste has reduced considerably.

She said, “The stench from the maggot infested and rotting bones used to drive people away from us and sometimes they even treated us differently. We earlier had to go through the discarded waste in landfills and garbage pits to earn our daily wages, but now people are more receptive of us and even help us by sorting waste at their homes and handing over the waste directly to us”. 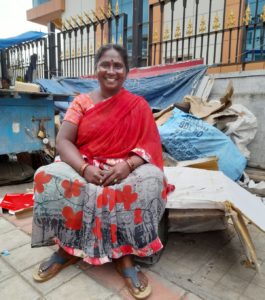 Indira is one among the 22,500 Informal Waste Pickers in the city, collectively saving around 38,32,50,000 KGs of waste from ending up in the landfills.

Indira pointed to the troubles she and her family had to go through for two meals a day and explained how the Informal Waste Pickers in our society have no option but to be self-reliant and go about collecting the waste from the streets of Bengaluru.

Speaking about the amount of waste she collects on an everyday basis, Indira said, “It depends on the particular day in question, sometimes I collect up to 50-60 KGs and sometimes I end up collecting nothing. It is a constant process of collecting, sorting and selling the waste in the ‘Jaali’, a market for the recycling economy.”

Indira’s eldest daughter has graduated with an MA degree, standing 5th in her course. Her son has completed his bachelor’s degree and has recently started volunteering at a social group that works closely with the Waste Picker community in Bengaluru. With her other son and daughter currently in college, Indira has ensured her children are enabled with enough know-how to get through life. She added how her intent at educating her children was not to drive them away from the Waste Picking economy, rather better equip them to handle the nuances of a business.

When asked about her understanding of the contributions of the Informal Waste Picking community, Indira said, “I recognize that we are an integral part of the society. Us waste pickers collectively save the government crores of rupees in the processing of waste. I feel very happy and proud that we contribute to society at such a grassroots level”.

Editor’s Note: A representative of BBC Media Action, Yashaswini, had also approached Women’s Web to feature Indira’s story, around the same time that we received this submission. “She has been doing her bit to help keep the city clean while putting her children through college. I believe she typifies what a modern woman our society, all while being proud of her identity of being an informal waste picker,” says Yashaswini. “The ‘Informal’ waste picker community saves 38,32,50,000 KGs of waste from ending up in the landfills, every year, to put things in context that is equal to 95,000 elephants standing side by side JUST IN BANGALORE.”

Register at Women's Web to get our weekly mailer and never miss out on our events, contests & best reads - you can also start sharing your own ideas and experiences with thousands of other women here!
environmentwomen at workworking women