10 Knockout Moments In Koffee With Karan Season 7 Episode 1… Do You Agree?

Koffee With Karan Season 7 Episode 1 was Ranveer Singh all the way! A crackling episode that has all fans sit up and take notice.

For me, the ‘Koffee With Karan’ was getting insufferably predictable, boring, and even borderline mean in the last few seasons. There were a few exceptional guests on the show though like Twinkle Khanna and Nargis Fakhri, who lend some originality and wit on it.

So, I had zero expectations when the latest season was out last night. In fact, I was prepared for the worst.

I mean, it’s Alia Bhatt in the introductory episode, who is intolerable to watch offscreen with her gross immaturity, and lack of intellect on the whole. I don’t mind her emoting on-screen, though. She’s an excellent actress, no doubt.

I watched Karan Johar’s rapid fire on Pinkvilla, where he gloats over darling Ms. Bhatt and claims that the word talent should now be replaced with Alia Bhatt.

If this is not nepotism, what is! (Thank you, Kangana!)”

While Alia is talented, it’s a bit of a stretch to replace the word ‘talent’ with ‘Alia Bhatt’ while conveniently not mentioning the word ‘privilege’. When you get the best of roles on a silver platter owing to your lineage, it’s privilege first and talent next. Also, there’s no scarcity of talent in the world that the word has to be replaced with one privileged actress’s name. Talent is not scarce, and it’s not limited to the elite few.

“And then there is Ranveer Singh,” I thought. “I mean, what more could he offer that we’ve not seen before? Apart from his loud clothes and ways, that is!”

But, the first episode was not that bad.

While it may have to do with my expectations being zero, a huge redemption factor was Ranveer Singh. He literally stole the show from the start to the finish.

Karan Johar started off the episode on an impressive note. I liked his self-deprecating humour. Alia was being Alia, looking a little more radiant than in her earlier appearances on the show. Thanks to the unmistakable pregnancy glow.

However, she, along with the host, bored us for more than half an hour about how pure, pious and sincere a lover and husband Ranbir Kapoor is. Also, if KJo is listening, the sexual innuendoes and jokes are also getting jaded.

My favorite moments were undoubtedly the ones with Ranveer Singh. 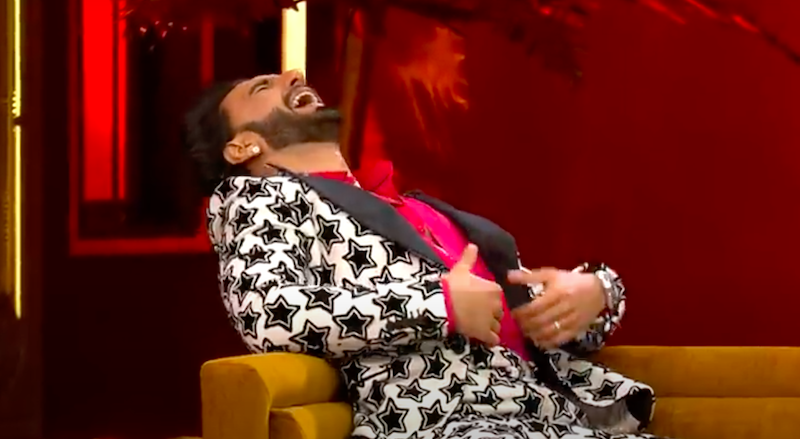 When Singh laughed his guts out at Alia’s first email ID name. Punkbabe something. ROFL! 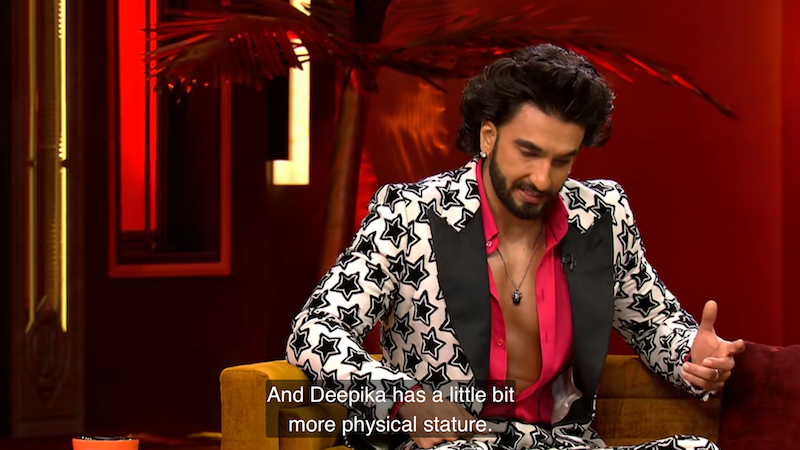 When he was asked what Alia had which Deepika didn’t, and vice versa. His answer was straightforward and subtle, which pitched the two actresses as equally talented. Unlike a previous ‘Koffee with Karan’ episode, where Karan Johar was blatantly biased towards Alia Bhatt, although Padukone was internationally more well-known at that point in time and had a credible line-up of performances and hits. When he called out KJo for a biased Q to Alia and termed it nepotism. Yes, it was an unfair question and good on Ranveer for holding his ground. 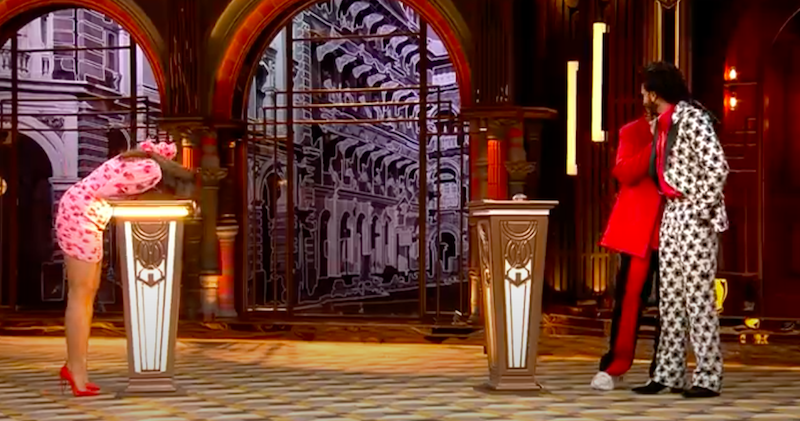 When Alia mistook a question, and Ranveer remarked, “Ladies and Gentleman! Genius of the year!” ROFL! 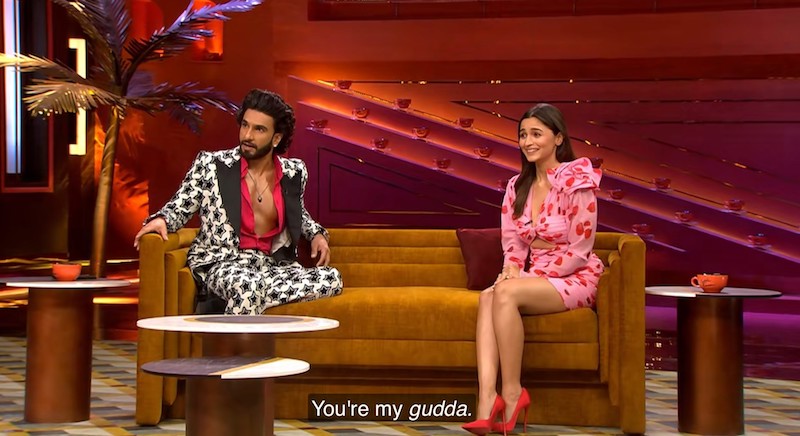 When Karan Johar brings up the vilification of Bollywood in the last 2 years, and Alia Bhatt joins in sympathetically, “I thought we were done.” Ranveer Singh acts all cool, ignorant, and uninterested in joining in the drama. But he lends his full support to Johar, topping it by calling him a “Gudda” at the end. How cute! Smooth. Very Smooth. When Ranveer doesn’t get Deepika’s zodiac sign right which shocks Karan and Alia, and he goes like, “What? I don’t believe in astrology.” 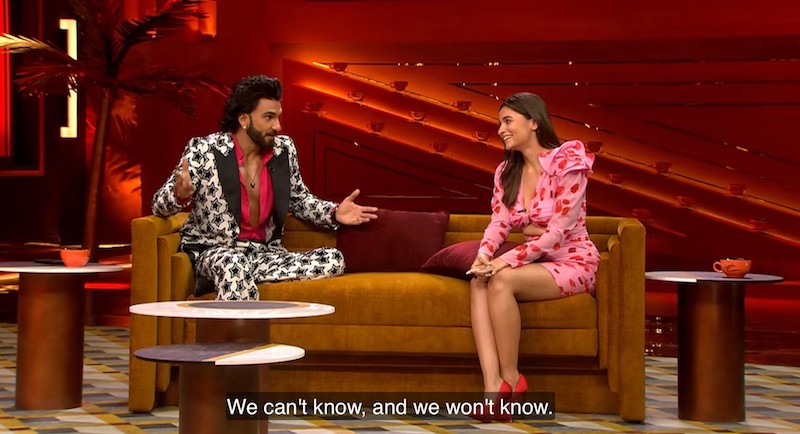 When Karan asks how would Alia-Ranbir, Anushka-Virat, and Vicky-Katrina be celebrating their 50th anniversary. The look on Alia’s face when he spoke about Vicky and Katrina was priceless.

When Alia chooses Ranbir and Varun over Ranveer, the latter creates a ruckus and walks out while declaring, “Dost ke naam pe kalank.” (You’re no friend!) 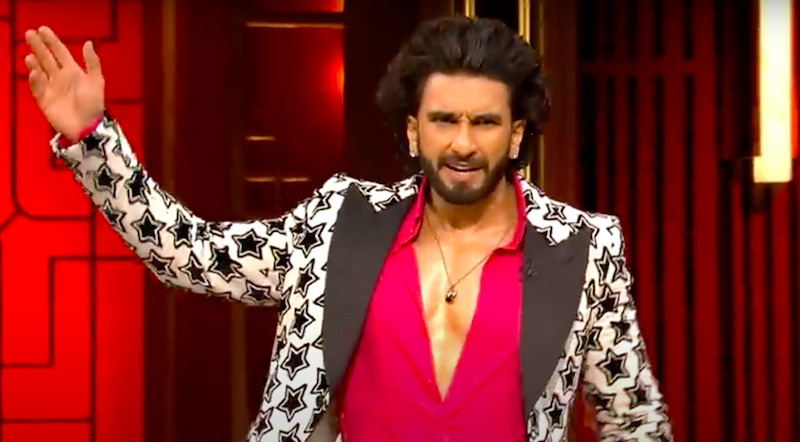 Alia defends her stance saying but she didn’t throw up a fuss when Ranveer commented on her short stature. To which he responds, “Ooh ooh ooh, touched a nerve.” Ranveer Singh was on fire. Alia shares Ibrahim Ali Khan’s message that he took the time for after Gangubai Kathiawadi. Ranveer remarks, “Since you’re busier than Jeff Bezos na in life.” And “Lady?” while shaking his head. “Oh God! (3 times) Charan Sparsh, Ibi Sir! Thank you for removing the time to send the message.”

Even though this was admittedly a tad mean and could have been avoided, I’m presuming they’re a close-knit group that doesn’t mind pulling each other’s legs on national television. Whether it is Hrithik Roshan or Kapil Dev’s “What else we here for” or Ranbir’s “Jai karna aata hai” impersonation, Ranveer Singh’s mimicry was a treat to watch.

From his inventive jokes to mimicry, FULL marks to him for the entertainment and infusing some energy into a tired, scripted show.

And why is Akshay Kumar buzzing around Samantha Ruth Prabhu like a bee to honey? Have to find out next. Stay tuned!

Were Johnny's Pockets And Connections Too Deep For Amber To Be Heard?

The Life & Times Of Usha Uthup, The Unconventional 80s Queen Of Indian Pop In A Saree

Let's Look Beyond #MeToo 'Coz It Hasn't Really Worked For Indian Women Who Are Shamed But Perpetrators Roam Free...