Why Should I Pay A Man To Get Married To Me?

Men, earn for yourself and satisfy your own needs. Don’t expect your wife to pay for your luxury in the name of marriage.

Dowry. A 5-letter word which has a huge impact in the South Asian society.

India, Pakistan, Bangladesh and Sri Lanka have always been on the limelight for practising the violative dowry system, which refers to the assets (both materialistic and monetary) given by the bride’s family to the groom’s family prior to the event of marriage.

Being an invariably one-sided service, the shameless practice of dowry system has always cast its worst effects on a woman and her family.

In the Indian scenario, despite being criminalised legally under the Dowry Prohibition Act, 1961 dowry is still widely practised as a convention that is supposed to determine your reputation.

We are now used to witness a dowry death incident almost every day in the media. It’s high time we take a step forward to eliminate this vicious practice against women. 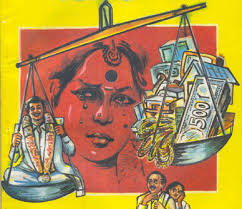 Marriage which is supposed to an event of uniting two hearts to share their lives is often considered as a social practice of exploiting resources.

There is an immediate need to stop normalising dowry as an indication of family reputation. It needs to be understood that real class and reputation is when a human mind is considered as a basis for marriage and not money. We, as a society for the purpose of a dignified coexistence of men and women must raise our voice against this sinful discriminatory crime.

*Earn for yourself and satisfy your own needs. Don’t expect your wife to pay for your luxury in the name of marriage.

*You don’t have to ‘be a feminist” to refuse dowry. You just have to be a human with some sense and sensibility.

*Dare to refuse receiving dowry in your marriage. When a man voices out against exploitation, the result is far more better in Indian scenario.

*Do your bit to make this country a better place to live for your daughter.

*Stop Giving Dowry. Refuse getting married to a man who demands dowry.

*Don’t pay anyone to get married. Marriage is not a deal, and you are not a commodity.

*Choose men who choose you, and not those who chase your money.

*Focus on your career. Your growth. Be financially independent. Become emotionally mature to choose the right man.

Given the existing societal norms, this might seem like a tedious task. But, all it takes is a moment of courage, and the good will to end this deep-rooted barbaric convention.