Closer home, ’Virushka’ have often redefined couple goals. They have regularly cheered for each other, teased and shared cutesy soft-focus pics while so many swooned and sighed.

The latest note by Anushka Sharma on her SM handle talks about her husband’s resignation (as the Indian men’s cricket team’s captain) and the journey they have had together so far. 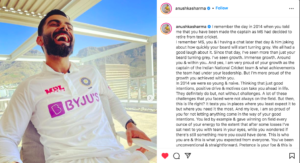 This post, dripping with ardent love, (not the ‘ishq waala’ love but ‘Pyaar waala’ love that comes after sharing your bathrooms and witnessing your man up close in life’s highs and lows!) is her wearing her heart on her sleeve.

This Insta share, about her feelings, about her man on her TL, has many getting their tighties in a bunch.

‘What is her claim to fame to air her not so pristine views about Indian Captaincy’ some ask. Especially when the spouses of past captains didn’t share their inner views for the outer world’s consumption! Here’s why this is nonsense

Virat Kohli was the captain for 7 whole years! Insta was launched in India in 2010. So do your math! It took some time for Social Media to explode into the beast that it is now!

Unlike the earlier wives or girlfriends, Ms Sharma was already a celebrity with a huge following, before she got hitched. She was sharing stuff routinely on SM with many lapping up eagerly all that she dished out. Why should peeps question now, when she shared her thoughts about one of the toughest times of their life?

Everyone is wired differently. Period. Comparisons are odious.

Is this question valid even?

Talking on social media, and seeking solace in the love you receive from total strangers is sometimes very comforting. But to grudge a person even this is sad on so many levels.

How one decides to show love to one’s own, is really one’s own business. Especially if they stick to their own domains. Who are we to suggest how Anushka should express her love to her mate?

The one who has been loved (unconditionally) will surely resonate. But the world is made up of all sorts.

Move on, scroll past, if you have issues

Didn’t like her showing support to her spouse on cyberspace and the emotional echo it garnered amongst the netizens?

There are plenty more shares to spew vitriol on.

And for God’s sake, a woman having a thinking brain ain’t a crime! Celebrate such a woman, emulate her and not castigate her. These are just attempts to silence women in one more field of their lives.

Better still, find a worthier cause to raise a storm. God knows, there are enough messes floating out there!