Real Love Can Never Be Violent; So What Does Desdemona’s Murder By Her Husband Mean Today?

This question is not just about Othello or Omkara. A man thinks his wife is cheating on him, and then believing he is the rightful judge to ‘punish her,’ he murders her. What does this mean today?

Shakespeare’s tragedy Othello deals with the downfall of a brave, accomplished Moorish general in the Venetian army. After Othello chooses to promote Cassio instead of Iago, Iago seeks revenge by tricking Othello into believing that his wife Desdemona and Cassio are having an affair. Iago manipulates him to the point that Othello ends up murdering Desdemona. For the first semester of English Literature, we had to study Desdemona’s murder scene.

Understanding Shakespeare is challenging. I still remember studying Julius Caesar in tenth grade, how my teacher had said that it was important to focus on every word; the smallest detail must not be missed.

I’m no expert when it comes to Shakespeare, though I keep thinking that the murder scene seems to express the idea that Othello didn’t truly love Desdemona.

A better way to frame that would be: the relationship Othello and Desdemona shared would have been based on something else, maybe admiration. But, love? I don’t think so.

Othello doesn’t believe her (that alone speaks volumes about how strong their ‘love’ is!). Yes, the isolation he has experienced because of his racial identity plays some role in making him doubt Desdemona’s love. His insecurity can be viewed as a product of the discrimination prevalent in that society. The differences between him and Desdemona may strengthen the idea that she could prefer Cassio. Most importantly, he’s getting influenced by Iago, one of Shakespeare’s most cunning antagonists.

Omkara – the Indian adaptation of Othello

While I was learning about Othello, I also watched the clip of Vishal Bharadwaj’s Omkara where Omkara (Othello’s counterpart) stifles Dolly (Desdemona’s counterpart). Moments before her death, when she is being confronted by her newly-wed husband, Dolly’s eyes are wet. She looks lost. Hurt. Numb.

What scares her? That the love of her life has grown so distant, so cold? That he’s accusing her of being unfaithful? That she has no idea what wrong she has committed?

What gives him the right to ‘grant her mercy’, or to decide that she deserves death for ‘her mistake’?

Somehow shaq (suspicion) ruins the reality of love in every love story. However, the problem with Othello is not about trust, jealousy, insecurity, or manipulation, it is about the act of murder.

How can this violence be love?

Othello could have left her, ended their relationship. But killing her? And justifying it, saying he was punishing her for her sin?

How can I believe that he ever loved her?

After realizing that he has been manipulated and that Desdemona had always been faithful to him, Othello stabs himself out of shame and guilt. Before dying of suicide, he says that he was someone who ‘loved not wisely but too well.’

You don’t murder someone you claim to love ‘too much,’ do you? Not trusting his wife is Othello’s misunderstanding, his insecurity, him getting brainwashed by Iago. Murdering her is violence, abuse.

Plus, Othello feels sorry for killing Desdemona because he doubted her love. Does that imply that if she had been unfaithful, he wouldn’t have thought murdering her was wrong?

How do we read this story in today’s context?

This question is not just about Othello or Omkara. A man thinks his wife is cheating on him, and then believing he is the rightful judge to ‘punish her,’ he murders her. What does this mean today?

The play belongs to a different time, different place; the people are different too, but what about love?

Love is complicated and far from perfect, that’s true but love is incomplete without trust. The problem arises when any form of toxic behaviour is accepted in the name of romance, or passion, or love. Love is not about owning someone. A quite popular declaration of love in movies, ‘tum meri nahi ho sakti toh kisi ki bhi nahi ho sakti’ (if you cannot be mine, you can’t be anyone else’s either) is not romantic at all. Loving someone so much that you won’t let them live happily with anyone else, that you can’t bear the thought of them not choosing you . . . that’s not love.

Even in 2021, women are forced to stay in abusive relationships because society expects them to preserve the holy institution of marriage at the cost of their dignity, their basic rights. Worse, some feel that they should not abandon their love. That they should fight for their love.

No, love is the opposite of violence. No matter how passionate love can be, it shouldn’t be an excuse for abuse.

Unlike the way this kind of relationship is represented in many movies, television shows and even books, Omkara doesn’t try to glorify violence, dismissing it for the sake of intense love. Although the film has scenes depicting the romantic relationship between Omkara and Dolly, when Omkara stifles Dolly with a pillow, he’s not her lover. The scene does not try to suggest passion or intense love, there’s only violence in those fifty-four seconds.

As Omkara is suffocating her, Dolly struggles and reaches for him. She reaches for his shirt, then for his face, trying and failing to stop him. For moments, her hand firmly clutches the side of his face before it goes numb and slides down his cheek, revealing a scar. Revealing Omkara’s monstrosity, not love.

Image source: a still from the film Omkara 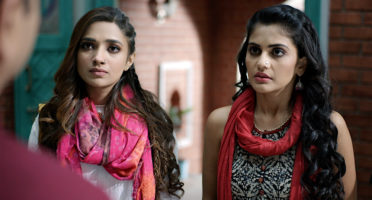 Stop Stereotyping 'Strong' Women As Ones Who Don't Care About Their Looks!