Mothers that sacrifice their all for their family's well-being are "innocent". Where as, mothers that have lives, and interests of their own are.. what, exactly?

Mothers that sacrifice their all for their family’s well-being are “innocent”. Whereas, mothers that have lives, and interests of their own are.. what, exactly?

Do you remember when you woke up late, and though you had a million things to do, the first important thing you did was pick up your phone and check your Instagram?

Well one such time, when I was drowsily scrolling through my Insta feed, I came upon a post that said, ‘We are the last generation of children whose mothers are innocent’.

Now, if you were thinking along the same lines as me, you’d wonder what exactly is the definition of innocence and why this so-called generation is sad about being the last ones to receive it. 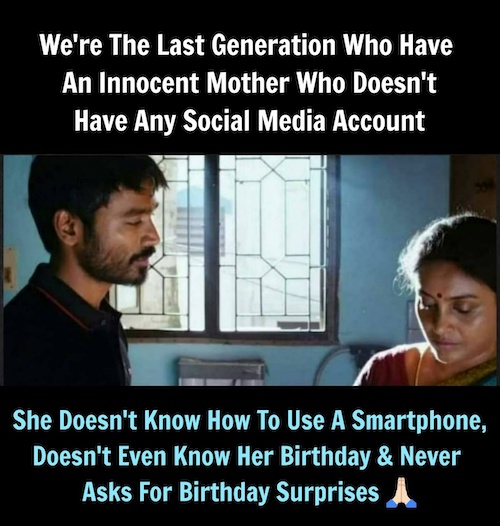 Does that mean in the future when I become a mother, I’m not going to be innocent? Hmm. Let’s break it down, shall we?

Why fear, when the motherbot is here?

Think of the following scenario: You are a man in your 20’s, you have woken up late, and now you are late for the office. But fear not, your mummy is there to handle the situation. She has kept your clothes, tiffin and lunch ready, and all you have to do is get up, freshen, and then grab all the things you need from her. On your way to the office, you think how lucky you are to have a mother whose sole purpose in life is to cater to your needs (even though you are an adult), and whose entire world revolves around you. You will be even more lucky, you think, if you marry a wife whose qualities are the same as your mother’s, as she will take care of your kids in the same way when they are late for school. Awwwwww.

Now what’s so wrong about mothers taking care of their children, you ask, even though they are adults? It’s considered the first rule in the handbook of a mother to dedicate her entire life to taking care of her children. Even though, said children become adults who are unable to look after themselves without being dependent on anyone. Do you know what a mother sacrifices to attain the ‘good and innocent mother’ status in society? She forgets that she is a human, too, with her own dreams, and life!

When motherhood becomes synonymous with martyrdom

From the time she becomes a mother, she completely puts aside her wishes and needs, and keeps you at the centre of her existence. And what do we reward her with? We laud her for sacrificing her life and romanticise such sacrifices for the future generation to learn. Worse, men compare their wives with their mothers, belittling them for not doing enough as their mummy used to do.

What happens if your mother learns to use social media and connects with her friends? What’s so wrong if she goes out to enjoy, and take some time for herself? What if she wants to be surprised on her birthday? What’s wrong if she decides to do something on her own, something she enjoys and has a passion for?

Not so innocent now, are we?

So, let me give you a set of rules, which is sure to be in the handbook of the generation of mothers who are not so ‘innocent’:

For many generations, mothers have given up on their dreams, and their lives has been pledged to the well-being of their husbands and children. The next generation of mothers, who have struggled to achieve their dreams, will care for their children as every mother does. But don’t expect them to uphold patriarchy in the name of motherhood.

So, for the next generation of ladies, it doesn’t matter when or how you will embrace your motherhood. You may be the mother of a child or a pet, a favorite aunt or godmother. Or you may not want to have children. No matter what’s your choice, remember to not let anyone make you feel bad. Let them know that you are not ‘innocent’. Celebrate your independence.