No Longer A Doormat, This Mother Will Rise Like The Sun

Was she willing to let herself experience that authority over her life once again? Would she let go of this martyrdom that mothers get hooked on to?

“Mumma, did you apply the new kajal you got yesterday?” inquired Rohan, the more sensitive one of her sons.

“Yes!” answered Mitali, animatedly. She was expecting a compliment, for it had been years since she had actually taken care and tried to look somewhat presentable.

Motherhood had taken away a lot of her individuality a in the past twelve years. It took away her job, her friends, her varied hobbies that she took pride in. And most importantly, it took away her singularity, and her self-identity.

Mitali felt a gamut of emotions in that tiny non-existent insignificant moment. She felt betrayed by her usually compassionate son, enraged at her own lack of self-existence and it made her feel like a doormat.

“Rohan, it’s a good thing you told me what you feel about it and I appreciate your opinion. But, let me make it very clear that your mother can have her own likes and dislikes, especially when it comes to her own self, okay?” she retorted immediately before taking a breath and continuing, “So please appreciate that fact, henceforth.”

Rohan was unsure what to say, so he just nodded. Mitali resented herself for making him feel confused for simply being honest. But she felt the need to sensitise him about the fact that it is not always desirable to be brutally honest. Rather, a little empathy is all it takes to be man, or why be sexist, to be human! She ruffled his hair, playfully and stretched her face into a smile.

As he ran to play with his brother, she grabbed her book and claimed a corner to read. But, for the life of her, she couldn’t concentrate. Her mind was constantly on interrogation mode. So she got up and went to the mirror placed above the mantle. This was where she had once displayed her paintings, it seemed like she used to paint in another lifetime.

She took the tissue off the box lying nearby and thoroughly wiped the dust off the screen of the paintings. Instantly stimulated after looking at them, she chuckled, “I wasn’t that bad!” Then she looked up at the mirror and wiped the extra kajal from under her eyes. She smiled as she thought of how she never left the house without eyeliner and a little kajal while she was studying. Mitali was often told that her eyes were her best assets and she loved accentuating them.

Wistfully looking out of the window, she saw the setting sun going back into the earth’s womb only to be born again, maybe, in twelve hours. She went closer to the window and saw her kids playing in the society playground. They played with absolute deliverance, and didn’t need her anymore, looking after them 24/7. The kids were experiencing the unfolding of their own authority over their own lives.

Was she willing to take charge?

Was she willing to let herself experience that authority over her life once again? Would she let go of this martyrdom that mothers generally get hooked on to? Was she one of the mothers who let their whole lives be the testimonies for their sacrifices and bind their kids with that string forever?

Would she dare to be more than just the shadow of her first first, then her husband and now her sons? Shouldn’t her kids not see who she is and accommodate themselves around that?

The kids were quite emotionally and physically independent. Shouldn’t they be capable enough of respecting her as an individual than just their mother?

She decided to take it one step at a time

She felt an assertive need to answer these questions boiling in her head before their evaporated, leaving her complacent once again. Mitali takes her book and places it back on the shelf. Descending the staircase in a reasonable hurry, she picked up the garage keys.

“It will need a thorough cleaning and I would probably need to pain orchids and dandelions on one wall,” she mumbled to herself.

Maybe an art class would bring some hues back in her life, to start with. 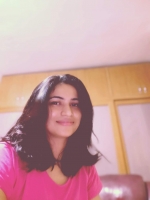 Yes, Urinary Incontinence Is Embarrassing. But Hiding It Under The Sheets Doesn’t Help