‘Stop right there!’ Draupadi gave him a death glare as she stepped up to him and poked him in the chest with enough force for him to stumble backwards. ‘Let’s get one thing clear, Yudhishtra. I,’ poke, ‘am not,’ poke, ‘your wife,’ poke, ‘anymore. Understood?’

‘Stop right there!’ Draupadi gave him a death glare as she stepped up to him and poked him in the chest with enough force for him to stumble backwards. ‘Let’s get one thing clear, Yudhishtra. I,’ poke, ‘am not,’ poke, ‘your wife,’ poke, ‘anymore. Understood?’

Finally, Kunti relented, wiped the tears from her eyes, and turned to Narad Muni. ‘My apologies, O sage. We would be most delighted,’ she coughed to cover up another giggle, and Draupadi and Amba burst into another round of laughter, ‘to have you contribute to our cause.’ She looked at her watch. ‘In fact, it is getting late. Will you be returning with me to the orphanage?’

Narad Muni responded sullenly. ‘Yes. They’ve confiscated my usual residence. I’ll come with you.’ Then, his eyes lit up with a spark of spiteful pleasure. He turned to Draupadi. ‘Oh, and Krishna has asked that you host your husbands for the duration of their stay.’

Draupadi stopped laughing immediately. ‘What? No! No, No.’ ‘Why not?’ Bhima looked hurt.

Draupadi shook her head at him quickly. ‘It’s not that I don’t want you to stay, Bhima. Of course I do. It’s just that … just that with my work … and the timings …’ She looked around desperately. ‘There are only three private rooms! And one of them is a study so there are only two beds,’ she declared.

Arjuna could have laughed, but said instead, ‘I think we’ll manage. After all, in the past we’ve slept on many a forest floor.’ He looked at her meaningfully, willing her to remember being with him on said forest floors. He knew she’d remembered when her expression faltered and she looked away.

Yudhishtra nodded. ‘We’ll be fine. Draupadi and I will take one chamber, and the rest of you can fan out around the house.’ He began to walk around the living room, taking in the place. ‘It’ll be dark soon. We should light some lamps. Where do you normally make your fire, Draupadi?’

‘Stop right there!’ Draupadi gave him a death glare as she stepped up to him and poked him in the chest with enough force for him to stumble backwards. ‘Let’s get one thing clear, Yudhishtra. I,’ poke, ‘am not,’ poke, ‘your wife,’ poke, ‘anymore. Understood?’ She pointed to a door at the end of the hallway and said in a voice that was sounding more and more shrill by the second, ‘That is my bedroom. Mine alone. If any of you wish to enter to speak with me, you will knock. Politely. If you are to stay here, you will do so with the clear understanding that you are my guests and nothing more. That part of our existence is over!’

Yudhishtra put his hands up in a defensive gesture. ‘Calm down, woman. What’s gotten into you?’

Clearly distraught, Draupadi shook her head, ‘Don’t tell me to calm down!’ she shouted. ‘You will not … I will not … No!’

‘Yudhishtra.’ Kunti’s voice was gentle, but no one could mistake the resolve behind it. She walked over to Draupadi and stood next to her in silent support. ‘I want you to listen to me, my sons.’ She paused, choosing her words, and then continued, ‘Our mortal lives served an important purpose, and we all made sacrifices towards it. I made many decisions I have bitterly regretted over the years. One of them, abandoning my first-born child, was the reason I returned to this mortal world and is the reason I chose to remain here. What has happened already cannot be undone, but I can try to do better going forward.’

Kunti sighed. ‘When Arjuna won Draupadi at her swayamwara, we had just escaped a murder attempt and were, rather precariously, hiding in plain sight. You boys were young and susceptible. We needed to band together to face the impending storm. I couldn’t have let you three,’ she gestured to Yudhishtra, Bhima and Arjuna, ‘quarrel with each other over a woman. I saw the way you all looked at her. So I did what I thought I needed to do, to keep you united.’

Turning to Draupadi, she took hold of both her hands and squeezed them. ‘My dear, the injustices you suffered from being the common wife of the Pandavas are because of my words. Words that I refused to take back. For that, I am deeply sorry. Let me do better now. From this moment forth, the Pandavas will have no more claim over you. You are free, Draupadi. To belong to yourself or another.’

Unblinking, Kunti looked at each of them, one by one. Her voice had steel in it when she said, ‘That is my wish. You are still my sons, aren’t you?’

‘Of course,’ said Arjuna softly. His brothers followed with their own agreement.

She nodded. ‘Then, just as you obeyed me without question in the past, you will do so again. Draupadi is no longer your common wife. Is that understood?’ The Pandava brothers looked at each other in confusion. Kunti frowned and asked again, loudly, ‘My sons, is that understood?’

They all looked at Yudhishtra. His expression was solemn as he stared at his mother, his angry eyes as unblinking as her own. ‘Yes.’

Draupadi turned to face the wall so no one would see the tears sliding out of her eyes. Kunti held her shoulders as they shook soundlessly.

No one said anything. There was nothing more to say. 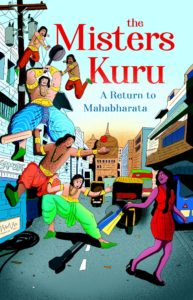 Excerpt from The Misters Kuru by Trisha Das shared with permission from the publishers HarperCollins India.

The Misters Kuru: Return to the Mahabharata is a fun and contemporary sequel to the chart-topper, Ms Draupadi Kuru, and takes off from the Mahabharata, with the story not ending when all the characters went to heaven. It is a feminist retelling – relatable to both men and women alike.

Trisha Das is the author of Kama’s Last Sutra, Ms Draupadi Kuru: After the Pandavas, The Mahabharata Re-imagined, The Art of the Television Interview and the internationally acclaimed How to write a Documentary Script.

If you would like to pick up a copy of The Misters Kuru: Return to the Mahabharata by Trisha Das, use our affiliate link at Amazon India.

Image source: a still from the Star Plus series Mahabharat, book cover Amazon