Leadership Coaching Should Be About Gender Equality Says Ruchira Chaudhary

Talking about her book ‘Coaching: The Secret To Uncommon Leadership,’ Ruchira Chaudhary tells us her thoughts on women and leadership.

In a patriarchal world that barely accepts women as leaders, some times, they have to fight to mark their spaces. And with that in mind, leadership coach Ruchira Chaudhary wrote her book titled ‘Coaching: The Secret To Uncommon Leadership.’

Other than being a leadership coach, Ruchira is also an adjunct faculty at several business schools while also running a boutique consulting firm. The firm focuses on organisational strategy solutions. With her background in mergers and organisational effectiveness, she can quite easily understand how to deal with challenging people issues.

She’s also written a series of articles on leadership and coaching for the Mint. Recently, I had the opportunity to speak to her about leadership, women leaders, coaching and her new book.

In a very stimulating conversation where she delved deep into her views on the current state of women in the corporate world and her book. Her theory of leadership when applied motivates and inspires rather than dictating and limiting.

An important message that needs to be sent

When asked about the background of her book and the motivation behind it, she said, “It is a bit layered. I teach leadership and organisational strategy at several business schools. And the whole business of coaching and enabling is very close to my heart. I also write about it extensively.

“Plus, I’ve been in the corporate world and experienced first-hand how debilitating it can be for the individual. Especially, if you’re in an organisation where there is a complete vacuum of enablement and coaching,” she said.

Ruchira also said that she has had the ‘good fortune’ of working with some really great managers. In her consulting work too, there were some clients who morphed into coaches for her. She said she’s seen a contrast and knows how uplifting it can be while changing the narrative of a person’s leadership journey. And she believes that it is an important message that needs to be spread out to the public.

After Ruchira moved to India from Singapore, The Mint gave her an opportunity to write a column for them. This was a series titled Coaching Conundrum. Needless to say, the column got great feedback from readers from all walks of life. She says that it resonated with a number of people who read it who thought it had the potential of being converted into a book.

What can business leaders do today?

Since the book deals with motivational leadership, I wondered if it comes naturally or has to be cultivated. Ruchira says that while there is a lot of debate around this, no human behaviour is really unchangeable.

“However, it is important to note that you can change if you want to change. Leaders don’t often recognise that they ought to change due to low self-awareness and when they do, they’re not always willing to. So, yes it can be cultivated but you have to be open to change,” she told me.

As for leaders changing and adapting to the constantly changing market requirements, Ruchira says that the world has changed from how businesses were organised a century or so ago. She says that businesses today are complicated and networked. In the current scenario, no one has all the answers.

So here’s what she thinks a leader-coach should do, “One – you need to give your people a voice and harness collective intelligence. Like in the pandemic, we’ve never experienced a crisis of such a mammoth proportion, so nobody could tell you how it’ll pan out. The businesses that have succeeded have given their people a voice.

“And the second is resilience. The best leaders have made sure their people play to their key strengths. That is the key to how you adapt. There is a Chinese proverb, ‘Give a man a fish and feed him for a day or teach a man to fish and feed him for life’. You have to give people the skills,” she continued.

Leadership is a life skill we all need

While the target audience for her book maybe corporate leaders, she has referenced other walks of life too, like sports and the performing arts. Thus, making this book a sort of guide for anyone aspiring to enable and uplift others, regardless of whether they are in the corporate world or not. She says, “Though the brief for this book specifies it is for managers and aspiring senior managers but I think of it as a life skill.”

When asked about the transition of leadership from instruction to motivation, particularly for women, Ruchira has some very interesting things to say. She said, “The way I have defined coaching is through a series of self-enabling and non-directive conversations – the whole premise is enablement.

“In so many ways, coaching should be a gender equaliser. The emphasis is that the destination is the same, even if the journey is slightly different. I’ve tried to put together a very simple framework which talks about coaching outcomes. First, building capability, the second piece is on providing more clarity and direction. And then there’s consciousness and self-awareness and the fourth piece is confidence,” she continued.

The confidence gap needs to be bridged

She also spoke about the confidence gap between men and women. “Despite the stellar performance, women tend to get plagued by self-doubt. There are research and studies that suggest that women don’t apply for jobs unless they are a hundred percent certain they meet all the criteria. Meanwhile, a man in the same position would do so. It is because of how we’ve been nurtured. We’re constantly told that we have to be perfect or near-perfect. So, what I’m saying is, coach them the same way, but do focus on the confidence factor.”

I asked her what she felt about coaching and leadership removing the idea of confining traditional masculine qualities associated with it. And whether it made it more accessible for women and non-normative queer and trans identities?

She says that it absolutely does. While speaking about the stereotype that women are naturally nurturing and men are natural leaders, she said we don’t need to applaud or celebrate them. What we need to do is talk about an alternative model that lifts people up.

Use coaching as a catalyst to bring about a change

Ruchira believes in highlighting these people achieve more success than traditional leaders. Instead of battling the stereotype, we need to open our minds to this different model and to coaching as a catalyst that could open the minds of conventional leaders.

Ruchira tells me, “We have struggled to get to the place we are today and we still have a long way to go. Take Tim Cook, for example, it is not about the differences, he is a capable leader. We have to coach our people to recognise that differences don’t matter, it is about what they bring to the table, their capabilities, track record, experiences. The focus of coaching is on capability and taking people along in the journey.”

Given how the pandemic has taken over our lives in the past year, I asked her about the double burden that women face and how the same isn’t really expected of men.

She says, “It’s a complicated one… The obvious answer would be to coach the man but that is not always feasible. I think we need to build women to be more assertive and help them appreciate what they are doing. They need to stop feeling guilty about their job.

The double burden and women leaders

“Unless we realise we are good enough, nobody will recognise that. We cannot constantly feel guilty for not attending to our domestic chores. And we have to assert the fact that the partner is also responsible for domestic issues. When we do that, we project a perception of confidence that gets amplified into our partners. I think it is building the confidence factor and truly believing what you do is your job and you are worth it. And I think we also need to start talking openly about the support and infrastructure. Why shy away from it!” she continued.

Having seen women in leadership roles in both India and Singapore, Ruchira has an idea of if leadership qualities are geographically subjective, especially for women.

She says, “I think successful women leaders exist in both these places even though the narrative is different. The cultural setting dictates how we perceive these leaders. In Singapore, there is more infrastructural support offered by society and the ecosystem to women. There’s full-time helpers and women are offered a deduction on the levy. So there are incentives to go out and work.

“Unfortunately, that’s not the case in India. The struggles are higher, the gender pay gap or low representation of women in boardrooms is a reality. So, it’s the narrative around women and leadership that needs to change, we need to do more to support our women leaders,” she said. 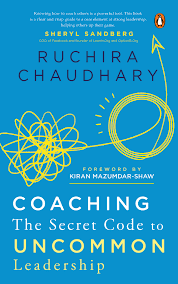 While women in leadership positions are still rare, women like Ruchira definitely give us the hope that one day this will change. If you want to read more about her book, you can check it out on Amazon India here or Amazon US here.

An undergraduate student of Political Science at Presidency University, Kolkata. Describes herself as an intersectional

#JLFDiaries: The Power Of Women’s Voices – Listening To Women At The Jaipur Lit Fest

Shehla Rashid’s Reality Check On Being A Female Leader Is Something You Should Definitely Read!