The self-sacrificing, exceptionally generous, and dutiful DIL in Pagglait shows us that women are allowed to rebel only 'within sanskaari limits'.

The self-sacrificing, exceptionally generous, and dutiful DIL in Pagglait shows us that women are allowed to rebel only ‘within sanskaari limits’.

When newly widowed Sandhya (played wonderfully by Sanya Malhotra) walks away at the end of Pagglait, you cannot help cheering for this once clueless young woman, slowly beginning to find her way.

A young widow, who sorts things out for herself

An arranged marriage, an indifferent husband, a narrow-minded family, a death – the path to finding even the beginnings of her own journey are meandering. Yet, Pagglait makes us believe that she will do it (ok, the ending needs you to cut the director some slack and believe that people sort themselves out this quickly, but hey, who ever said realism is the only way to go.)

Like most other people who’ve reviewed the movie, I too liked it for its exploration of a young woman’s coming of age. Sandhya is a typical young Indian woman (if there’s such a thing) ‘married off’ at the right age. On her 5-month-long husband’s death, she realises that the marriage has made barely any dent in her life – there is no relationship and therefore, no loss, no grieving.

Pagglait does very well the story of this bewildered woman whom this shock and the subsequent revelations about her husband actually push towards finding herself as an individual, rather than being an appendage to the family. 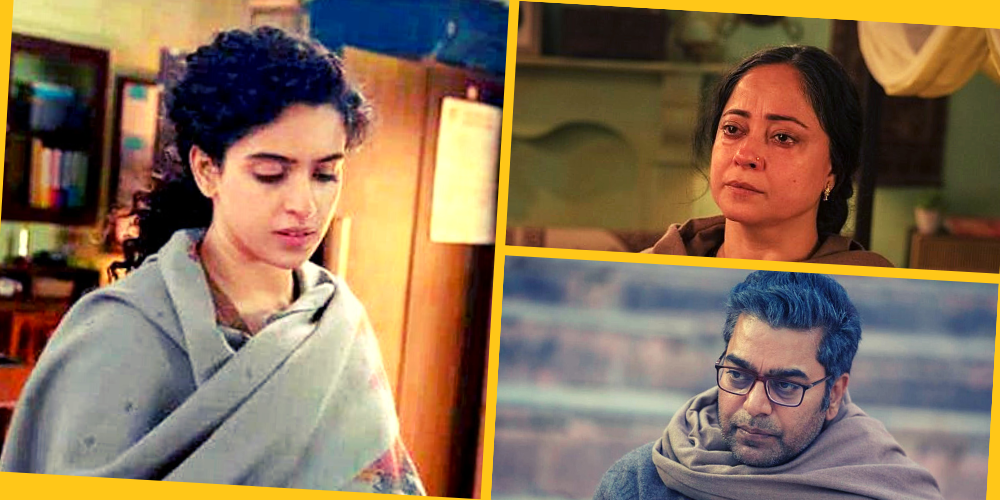 ‘Rebellion’, but within the ‘good bahu limits’

Yet, despite a lot of good things about it, the one thing that irked me about Pagglait was how the film ultimately had to cast her in the good bahu mould – someone who rebels, yet knows what her responsibilities to her ‘true family’ are.

The hefty insurance cheque she receives is dutifully left for the benefit of her in-laws, even as she leaves to earn her own living. I could still understand this, since the family is struggling, especially because the FIL retired since he had a son who was earning well (which brings up its own can of Shravan Kumar worms). But that’s not all – in her parting letter, Sandhya also has to tell the family that she will continue to financially support them, just as her husband would have.

Are these expectations of her fair?

This threw up a number of questions for me.

Why does a bride who has lived with a family for just 5 months feel like it’s her duty to keep supporting them?

Would a man owe his wife’s family this financial support, if he were in her place?

Her own parents are not shown as particularly wealthy – can a woman struggling to gain a foothold in the world also support her own parents? Why are her responsibilities to them never even mentioned?

It’s not that I have a problem with kindness, or anyone choosing to nurture the bonds of a family by giving so much (and these choices are shown as Sandhya’s own). Yet there are double standards here that make me deeply uncomfortable.

Ultimately they seem to say, women can rebel but only in very limited quantities. The very act of her leaving to find her place in the world, can only be justified by her continuing to be an exceptionally generous bahu.

Pagglait: Be Ready To Be Blown Away At Every Turn Of This Remarkable Story Of A Young Widow

Pagglait takes a commonplace tragedy and, through the power of its storytelling, elevates it into anything but common

Pagglait takes a commonplace tragedy and, through the power of its storytelling, elevates it into anything but common.

The narrative wastes no time at all in depositing us, the viewers, into the heart of Shanti Kunj, a pre-Independence era home in a Lucknow by-lane, in today’s time. Like true Indian guests with few boundaries and a visit-anytime ethos, we walk right into a bereavement.

After watching Sanya Malhotra's Pagglait, I realised that it had lessons too! So here is a zara hatke life lesson filled review for you!

After watching Sanya Malhotra’s Pagglait, I realised that it had lessons too! So here is a zara hatke life lesson filled review for you!

I watched Pagglait. After watching the trailer, I had liked it. There was something about Sanya’s expressive eyes that drew me towards the movie.

Overall, the movie was enjoyable. Well, as a viewer, I did feel the script losing its substance at some point. (This happens when an overzealous scriptwriter tries to coax a paper-thin storyline to handle too many issues)