Rihanna’s Tweet About The Farmer’s Protests Makes Us Question Our Silence!

Rihanna's tweet about the on-going farmer's protests in Delhi shows the impact of the movement and the silence of our own celebs on it.

Rihanna’s tweet about the on-going farmer’s protests in Delhi shows the impact of the movement and the silence of our own celebs on it.

A version of this was earlier published on the Women’s Web Hindi channel and was translated by Aditi Singh Kaushik.

For over three months now, farmers across India have been protesting against the farm laws brought by the Central Government of India. They have covered long distances, left their families behind to firmly oppose and protest against the laws. Even the 11 meetings conducted between the farmers and the central government could not yield any significant results.

Yesterday, international singer Rihanna tweeted about the ongoing protests, asking “why are we not talking about this?”

why aren’t we talking about this?! #FarmersProtest https://t.co/obmIlXhK9S

Rihanna’s tweet drew attention from many international organisations and personalities, one of them being the environmental activist Greta Thunberg. She expressed her solidarity with the ongoing farmer’s protest in India.

We stand in solidarity with the #FarmersProtest in India.
https://t.co/tqvR0oHgo0

International organisation Human Rights Watch which covers and exposes human rights abuse across the world also tweeted about the protests.

“Indian authorities should be releasing activists and others already jailed or facing criminal charges in politically motivated cases, not adding to that list" ~ @mg2411 https://t.co/OyiTBUjNz2 #FarmersProtest https://t.co/4hRqEISrML

Other big names including Meena Harris and Mia Khalifa have also spoken up about the issue. These tweets just make it an understatement to say that the protests have drawn considerable attention from celebrities and organisations across the world.

Why are we still silent?

However, in India, mainstream celebs maintained their usual ‘safe’ stance of being apolitical. Barring a few, every one of them conveniently maintained their aloofness from speaking up about the protests.

Many were quite quick to speak about the human rights abuses in other countries, like the USA. Although when it came down to speak about issues concerning our country, most of them have turned a blind eye toward whatever has been happening.

Not surprisingly, this isn’t the first time that many of them have maintained silence about issues like this. In 2019, again barring a few, none spoke about the large scale anti-CAA protests that were carried on across the country.

Words spoken by people with a big platform do make an impact, as visible in the tweet by Rihanna.

However, it depends on our moral conscience to stand for what we think is right. No newspaper, journalist or TV reports can tell us what is right or wrong. At the end of the day, it comes down to us to make up our minds.

Keeping in mind the ideals and values upon which this democratic nation was made, we must strive to keep them alive. 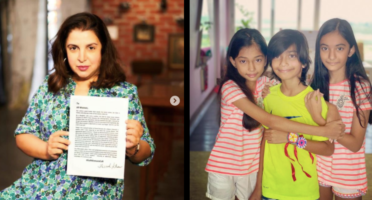