Crossing borders and languages, ‘Pawri ho rahi hai’ has managed to win everyone’s hearts. Isn’t that the kind of love and joy we want?

My initial reaction to the ‘Pawri ho rahi hai!’ trend was, ‘What is it?’ And ‘What’s so funny about it?’ A part of me later got curiously itchy to find out what exactly did this Pawri mean?

So I sought help from my most trusted friends – Google and YouTube. That’s when I realised that it was the latest video on Instagram from our neighbouring land which had gone viral.

YouTube was generous enough to spurt out the rest of the inspired memes, just like an enterprising salesperson at a sari store. As I kept binge-watching each of them, my face broke into a spontaneous smile.

I must admit I thoroughly enjoyed all of them, especially the one created by Yashraj Mukhate. He is the same guy who made the rib-tickling ‘Rasode mein’ and ‘Twada Kutta Tommy’ songs. Such a talent he is! If given an option he could make even a dead person sing. 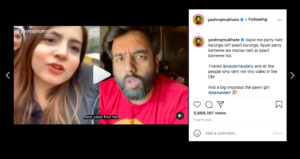 The viral video simply pulled me towards it

So continuing with my research, my inquisitiveness took me a notch higher and made me go through the girl’s Instagram profile. She looks cute. Angelic, I must say.

While browsing her profile, I realised she is a regular teenager with interests and aspirations that resonate with the youngsters of our nation. (Gosh! I’m feeling old already) She is someone who loves to share snippets of her life on social media.

Once again, I watched the pawri video that she had posted a week ago. She’s seen chilling with her friends while recording the video with an accent.

What’s interesting about this viral video is that it has the power and charisma to pull people towards it.

Everyone seemed to love it!

It made us smile and unwind at the same moment. People have been replicating it, sharing it and enjoying a split second of bliss in their otherwise mundane life. Bollywood and standup comedians are having a freaking time coming up with their versions of it, thereby keeping us entertained.

I was equally shocked to see Amul joining the league of using Pawri power to its benefit. It’s so endearing to see the latest video of our soldiers mimicking the girl’s fake accent and keeping themselves entertained at the Line Of Control (LOC). 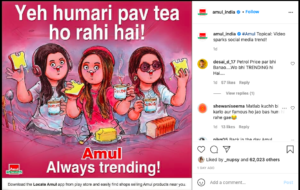 Let’s keep pawring, shall we?

Isn’t it wonderful to know that where one virus could put an entire world on lockdown a single viral video can bring back the lost smiles and hopes?

While watching it, I’m sure no one would have ever, not even for a second thought that she belongs to the nation that’s constantly at loggerheads with us.

Do you see the point I’m trying to make? It’s love that resides deep within all of us. Believe it or not, our true nature is not resentment but to stay happy and seek happiness for all. To be hopeful for a bright tomorrow where everyone is breathing peace and joy.

How I wish we have a virus that would be strong enough to infect our hearts with compassion, contentment and love for fellow beings.

Till then let’s keep pawring!

I'm a stock trader by profession. A yoga enthusiast and a qualified Yoga therapist.

An Open Letter to Toshi & His Sister: Child Abuse Is NOT Discipline Or Ma Ki Mamta

HOW Do You Not Know Who Nazma Aapi Is? Find Out NOW!