Whether I Breastfeed My Baby Or Use Formula Is Not Anyone Else’s Concern!

Often new moms find it hard to breastfeed their children for a number of reasons. It's time we normalised formula instead of shaming moms!

Often new moms find it hard to breastfeed their children for a number of reasons. It’s time we normalised formula instead of shaming moms!

We have all grown up seeing those corny baby product advertisements which depict moms cooing and cuddling their shiny babies. The mothers in these advertisements are a picture of gaiety as they seem to glow in the warmth of motherhood. But, we all know this is far from the truth.

Yes, motherhood brings joy. But, it is also exhausting and more often than not, drives a woman to her wits’ end. Add to it the societal yardstick of being the ‘perfect mom’, new mothers are often left gasping for breath. The good news is that things are changing.

New moms are being more and more vocal about the fact that there is no such thing called a ‘perfect mother’. There is no shame in mothering your child the way you deem fit and it is high time moms are not shamed and judged for how they bring up their children. Especially if they choose to use formula to feed their children instead of breastmilk.

Why we need to normalise formula

A study published in the ‘Maternal and Child Nutrition’ journal states that mothers who are not able to breastfeed their babies are often guilt-stricken. More than 75 percent of them feel the constant need to justify their reasons for not doing so.

Also, moms grappling with post-partum depression are put on medication owing to which they are unable to breastfeed their babies. These new moms are already on the edge due to a medical condition and you can only imagine the effect of being judged and shamed for not breastfeeding will have on them.

But, this is just the tip of the iceberg. In the Indian context, the judgment is vicious. Women are expected to breastfeed their babies even if they are struggling.

Many a time, the baby is unable to latch or the milk is not enough to satiate the baby. But, irrespective of everything women are told to be patient and to ‘try hard.’ It is conveniently assumed that breastfeeding is a natural phenomenon and so it will happen for everyone.

It is her baby and her choice!

Just as no two pregnancies are the same, similarly breastfeeding experiences are not the same for everyone. But ‘breast bullies’ often make these clueless new moms guilty thereby adding on to a stigma against moms who bottle-feed their kids.

To talk about a mother’s choice is a far cry especially in our patriarchal society. It is her duty as a mom to satiate her baby even if it drives her towards extreme exhaustion and even depression.

Moreover, why don’t people understand that it is invasive to even ask a mom whether she breastfeeds or not? It is a no brainer that it is indeed a mother’s choice as to how she chooses to feed her baby. Formula milk provides all the nutrients that a baby needs to keep him/her healthy.

It is time we stop stigmatising women who use formula

Model, television personality, author and entrepreneur Chrissy Teigen recently spoke about how she has been having a hard time breastfeeding her little one, in a series of tweets. A lot of women found her tweets reassuring and positive and her words ‘normalise formula’ found resonance with so many moms out there. Especially the ones who are constantly wrecking under the guilt of not being able to breastfeed their babies. 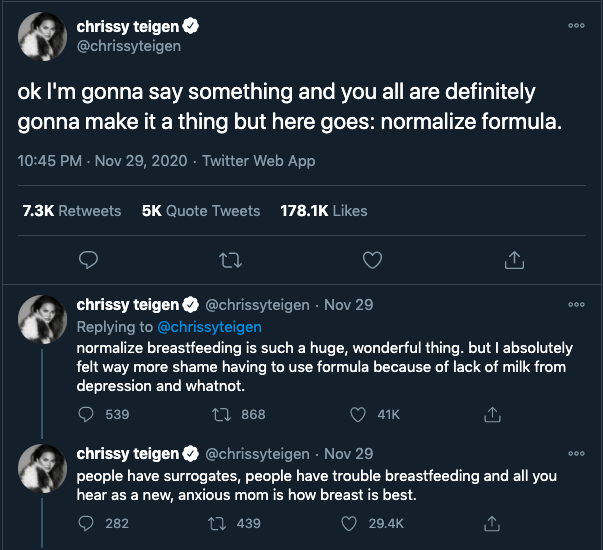 While Chrissy never denied that breast milk is good for your baby, she opened Pandora’s Box when she shared this. Given how there can be multiple reasons a woman may or may not be able to breastfeed her child.

We have all seen celebrity moms and society at large talk about the importance of breast milk. But, inadvertently it has stigmatized mothers who are unable to breastfeed their babies for multiple reasons.

It is also especially interesting to see that in the Indian context there is a barrage of articles on how breastfeeding is magical. However, there is almost no talk of normalising bottle-feeding. So, it is all the more heartening to hear Chrissy Teigen say- ‘normalise formula.’ Yes, it is high time we do that and end this incessant shaming and judgment of moms.