5 Reasons Why Bombay Rose, India’s Entry To Oscar’s Under Animated Films, Is A Must-Watch

Bombay Rose by Gitanjali Rao is shortlisted for the 2021 Oscar's in the Animated Films category. 5 reasons everyone needs to watch it!

Bombay Rose by Gitanjali Rao is shortlisted for the 2021 Oscar’s in the Animated Films category. 5 reasons everyone needs to watch it!

The animated movie Bombay Rose is India’s entry to the 2021 Oscar’s under the Animated Films category and has been shortlisted in the same. Bombay Rose explores different aspects of living life in a big and crowded city and finding love in the most unexpected circumstances. It portrays a life that the viewers will absolutely relate to.

Bombay rose is written, edited, directed and designed by Gitanjali Rao. Rao has earlier directed movies like the 2006 animated film Printed Rainbow, the 2013 films Chai and Shorts, and the 2014 movie True Love Story. She made her acting debut in the critically acclaimed 2018 film October.

Her latest film Bombay Rose focuses on two people who fall in love while facing a lot of hardships. The one hour 33-minute long film will be released on the OTT platform Netflix. (The dates of the release have not yet been confirmed by either Netflix or the makers.)

Bombay Rose recently won the National Laadli Media and Advertising Award 2020 for ‘exploring the themes of patriarchy and masculinity.’ It is also a worthy contender from India for the Best Animated Picture at the Oscars in February 2021.

Delighted to be included in this shortlist ! – Here Are 4 Indie Features That Deserve A Shot At An Oscar This Year https://t.co/O6Sahb2Kp2

As if all this weren’t enough to entice you to watch the movie, here are five more reason why you ought to!

Bombay Rose is relevant to the lives of women

The movie seems relatable to the lives of women who, just like the lead character, Kamala, are trapped in the shackles of patriarchy and societal norms. Norms that often exempt them from living their life on their own terms and will.

All the animation is designed hand-painted by Gitanjali Rao and her team of 60 artists. The movie took 18 months to complete and was made frame-by-frame by the artists. Each of these frames is an example of exquisite handiwork and if this is the reason you choose to watch the film, it definitely will be a valid one! 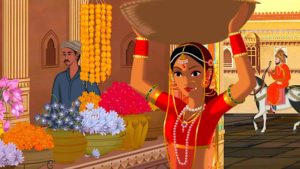 It captures the essence of a bustling city

Bombay Rose ensures that the audience watches the real, unfiltered struggles of a big metropolitan city that aren’t filtered to fit a certain narrative. Instead, we’re shown the everyday life in Bombay, the financial capital of India, where hundreds come chasing their dreams.

Bombay Rose shows that everyone has dreams to achieve

Bombay Rose shows that every person – regardless of their background dreams of a perfect life for themselves. It shows you that just because people belong to a specific background doesn’t mean that don’t have personal goals and dreams. That everyone dreams of moving away from their hardships and struggles. After all, they are humans too!

We often try to escape our realities, mostly from our hardships to a fantasy land where everything is perfect and exactly what we want it to be. However, we also snap back into reality in real time and enjoy that too. This movie encapsulates exactly that journey.

In a report in the IndieWire, the director Gitanjali Rao said, “The use of the frame-by-frame painted animation enables me to traverse seamlessly between the real and the dream world, poetically rather than realistically.”