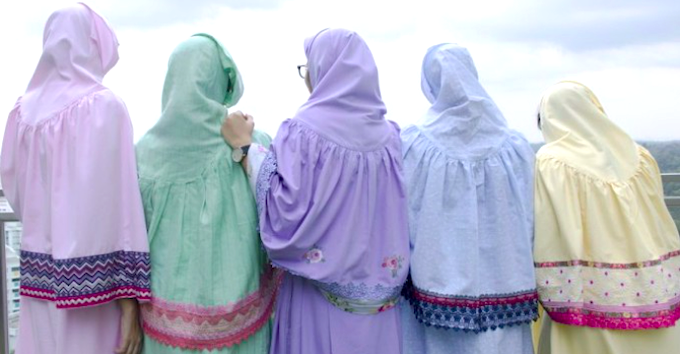 I Was Never Meant To Fit In, My Rida Simply Gave Me The Power To Do So

I was 14 when I first got my Rida, and what followed were constant questions about it, until one day, I realised I was never meant to fit in!

In the Dawoodi Bohra Shia Muslim community, to which I belong, wearing a Rida is a passage of rite for all girls once they reach the appropriate age. Like most of my friends, I too had to go through this initiation ceremony after my 14th birthday.

Even though I had seen countless women adorned in the same two-piece beauty for years, I was still a little sceptical. The first Rida that my mother had gotten for me, I still remember, was pale yellow with heavy blue embroidery. When I donned it for the first time, my heart was racing fast.

Myriad questions were popping in my mind, ranging from, ‘does this colour look good on me?’ to ‘will I be able to face the world in this?’ Even in India, where the majority of our community resides, wearing a Rida meant sticking out like a sore thumb.

People are used to seeing women in all kinds of clothes, from Indian to Western, even a black Burkha is very common. However, a Rida has not yet become that common with the people. Every time I stepped out in my new garb, I could feel the unspoken eyes on me, some filled with pity while others with curiosity.

Life in my new uniform was not very complex at first. I went to a community school, and therefore all the girls who went there wore the same outfit. My world was filled only with people from my community at the time. I had never ventured to meet new people and get new experiences outside of my tight circle.

My only social interactions at the time were when I went to the mosque, where I bumped into the same people. Here, I knew everyone and everyone knew me, so the thought of stepping out of my boundaries and entering adulthood was a daunting task. I think the biggest fear in my mind at the time was, whether I would fit in. This was followed by, ‘will I be able to make people see beyond my Rida and get to know me? What can I do in my Rida?’

I welcomed the inattention but not for long

It was the first day of college and I entered the classroom for the introductory class. Immediately I could see the same gazes travel all over me, taking in my odd clothing, discussing amongst themselves, ‘Isn’t she feeling hot?’ ‘Why does she not take it off in class? Wonder what her hair looks like?’ And so on.

People soon forgot all about me, and I welcomed the inattention. Unfortunately, that did not remain so for long. Classes started, professors came and went, and my popularity as the perpetual know it all was established on the first day itself.

I could not restrain myself from answering all the questions thrown by the teachers. From topics like the student-teacher relationship of Eklavya and Dronacharya. The theme of time in Shakespeare’s ‘A Midsummer Night’s Dream.’ And Gandhian philosophies of education, I could speak, question and debate on everything.

Everyone in my class was now looking past my attire and perceiving me with awe and respect. Even the teachers saw that I was something to be reckoned with and that my knowledge far surpassed the rest. But despite all that, people still wanted to know why I wore what I wore.

What I wore still mattered

They would tell me, ‘We are all girls, take it off for us.’ ‘I think you would look beautiful without it.’ ‘You should let down your hair sometimes.’ ‘Don’t you feel uncomfortable?’

I tried to answer as politely as possible, but the queries would never stop.

Until one day, when one of my professors was discussing how clothing impact people’s mindsets. And how certain types of garments restrict people, especially women, and how certain communities don’t allow their women to succeed in life.

Everyone tensed up at this statement, and most of the faces turned towards me because they knew what specific community she was talking about. It was now or never, I had to break my silence and do the right thing. I had to address all the queries and misconceptions that people had about me and the Muslim community at large.

I finally broke my silence

So, I spoke up, “Ma’am, when the Prophet Mohammed asked women of the Muslim community to shield themselves with a few pieces of cloth, he was not trying to snatch away their rights. In fact, he was giving them the most powerful weapon in the world.

“By covering up our bodies, he not just raised our stature, but also forced people to focus on the most important thing, our voices. The whole concept of ‘Muslim women are subdued through Burkhas‘ is only a Western mindset. This dress is not just simply there to cover us, but to liberate us so that we could move in the world without fear of being judged and shamed,” I continued.

“Our community has always encouraged their women to move forward in whatever fields they chose. We have scaled the highest peaks and dived in the deepest oceans, and we have done it all in our Rida. I wear a Rida not because I have to, but because I want to.”

With that, I didn’t just clear the doubts of my classmates, but also my own. I began to hold my head up high wherever I went, without fear of not being able to fit in. And I embraced the fact that my Rida gave me a unique identity.

I no longer wanted to be a part of the crowd, and I accepted the fact that I would always stick out like a sore thumb. Even later in life, while pursuing further studies and working in my school, I would make it a point to make people know that I dressed the way I did by choice.

I refused to go by all dress codes, and by putting up my preference, I broke all kinds of barriers and made my voice heard. Now, I knew that I was never meant to fit in, and never will be.

RJ Vijaya: How I Found My Voice, From A Simple Village Girl To Radio Active Community Radio

To Wear The Hijab Is Completely My Choice, And That Is All That Should Matter!