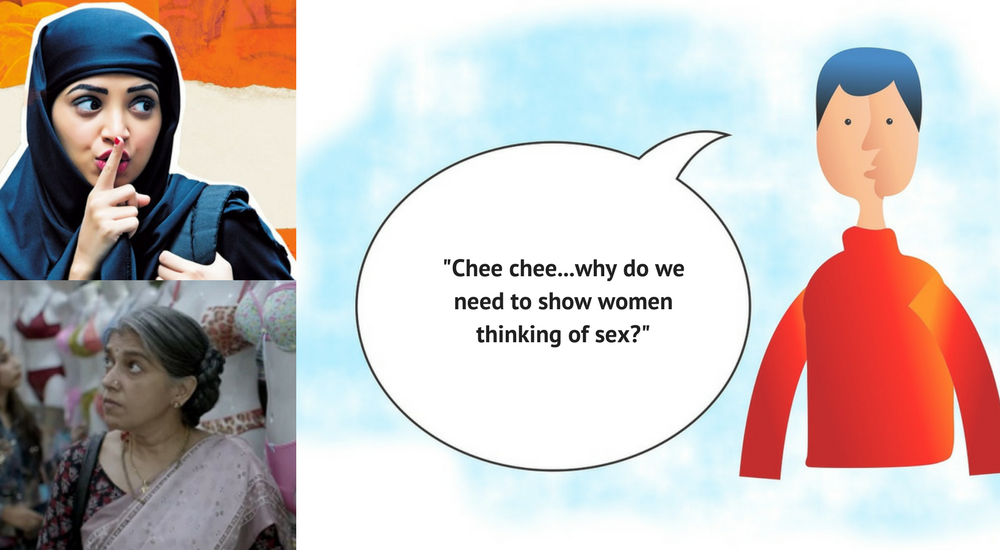 A few days ago, I was having a conversation with an elderly lady (who’s a neighbour) about a marriage in her family that was on the brink of collapse. While she spoke about the differences the couple had, including the issue of a husband who cheated now and then, she wondered why the woman didn’t just ‘adjust’ to the situation since she also has the well-being of her child to think about, and since every child deserves a ‘happy family’. While I was astounded by the absurdity of her logic and was contemplating the most courteous way to show her how she was wrong on so many levels, she went on with her explanation.

“See, I have this aunt who had a relationship in college. Her parents didn’t approve of the match and hence she was married off against her will to someone else. Once her husband discovered that she had a relationship before marriage, he abused her mentally and physically. He didn’t let her visit her parents, he’d keep a tab on all her activities, and she was not allowed outside the house without an escort. Despite all this, she was with her husband till his last breath, she bore his children, and she managed her family with her smile intact. She took care of all the housework, dressed well, and never complained about her husband. (Well, maybe just once when she managed to visit her parents’ place and begged them not to send her back but after they didn’t listen to her, that was the end of her complaints!) Because of this gentle and accepting attitude, she managed to have her family intact till the end, no?

“On the other hand,” She started presenting a second case study. “I have a cousin who is a professor in a reputed college. When she had problems with her husband she just left him and spent the rest of her life in a broken home with her two daughters!

“So, you see, women are the ones who can make or break a family and hence, no matter how our husbands behave, the onus is on us to keep the family united with all our grace and charm.”

I had just one question for her. “What about the woman’s happiness, though? Are you sure the first lady was happy making these compromises, being beaten up black and blue and kept as a prisoner in her own house? And are you sure the lady with the ‘broken home’ was unhappy just because she left her husband?”

The interaction kept swirling in my mind while I watched Lipstick Under My Burkha. It felt like I knew each of the four female leads in some way or the other. It wouldn’t be inaccurate to say I’ve lived parts of their lives, myself as well. Rehana (played by Plabita Barthakur) reminded me of my own college days. My mother too, like her parents, believed in the importance of education and strangely, just like her parents, she too was against giving me any other freedom in my life choices. Like Rehana, I was not allowed to wear jeans. While Rehana wore burkhas, I wore the most unfashionable looking salwar kameezes which sat like burlap sacks on my thin frame, ever since I was a teenager. Rehana wanted to rebel against all the oppression and did it in her own ways, I too did the same thing. She led a dual life, and at a point in time, I remember doing the same.

Shirin (played by Konkona Sen Sharma) reminded me of the aunt whose story I heard from my elderly neighbour mentioned earlier. While striving to play the role of a good wife and a good mother, while trying to cover up the abuse she was subjected to, Shirin desperately tried to gnaw her way out of the prison that her marriage had become, even if for a little while. Strangely, even the neighbour who narrated the stories to me had similarities with Shirin’s character. She is nearing her sixties now and all the while she had been a homemaker without any financial independence. Throughout her life, her husband didn’t give her a single penny to spend on her own desires! Though she expresses her disappointment over it sometimes, yet, she proudly claims to the outside world how much she enjoyed solely being a mother and a homemaker! Just like Shirin, she too was captured within a cage but unlike Shirin, she might not have had the courage or the desire to break out.

Leela (played by Aahana Kumra) came across as a woman who knew what she wanted – be it her ambitions for a career in a big city or the man with whom she wanted to spend her life. Though her circumstances forced her to be dishonest with her fiancé, yet I felt her helplessness, trapped in a small town between her mother’s emotional blackmail and her own desires to fly high. One of my girlfriends also underwent the same turmoil in her life. Though she wasn’t dating anyone, her parents thought that she should be married off just because she had crossed 30. When we met just a month before her marriage, I noticed how she was trying to control her tears at the prospect of getting married to someone with whom she didn’t find much in common. To my utter relief, she backed out at the last moment and today she is managing her own business, still happily single.

Finally, Bua ji (played by Ratna Pathak Shah) was the most nuanced character, in my opinion. A widowed lady, considered to be the matriarch of her family, who managed a successful business and was a force to reckon with. Bua ji was respected because of her age. She was supposed to be devoted to God and lead a life where her puja-paath takes a central role. But Bua ji too comes under judgement when she seems to have desires of her own. She reads raunchy novels hidden under religious books. Her fulfilment comes from reading the story of Rosie, a woman who desires her handsome young neighbour and keeps fantasizing about her. The narrative about Rosie from the book, ‘Lipstick wale Sapne’, blends seamlessly into the narrative of the lives of all four women. They all lead dual lives. One imposed upon them by the societal norms and their families, and the other secret one that gives them happiness, be it dancing with abandon inside a locked room, or becoming the best saleswoman in her company, or taking the lead in love making, or getting intimate with a younger man.

Bua ji reminded me of many such widowed women I’ve seen around me, including some of my relatives. I often wonder whether they don’t feel like experiencing intimacy again or is it because propriety is more important than listening to their minds that they take recourse to a bland life of conventions and restraints?

Hence, Lipstick Under My Burkha was not merely a movie for me. It was an experience, a shared experience of a lot of women I know around me.

The funny thing is, the psychology of a lot of men in real life also reflects those of the men portrayed in the movie. A friend shared an article on Facebook with me about a list of scenes from the movie which the Censor Board wanted to omit and those seemed like ridiculous cuts. However, when I went through the comment thread for that post, I smiled, thinking how Alankrita Srivastava has portrayed these sexist characters so brilliantly in the movie, as well.

Here are some of the comments from that post. 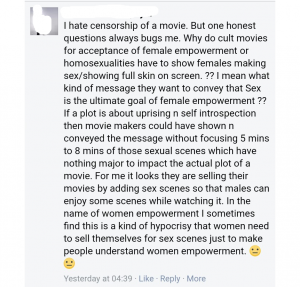 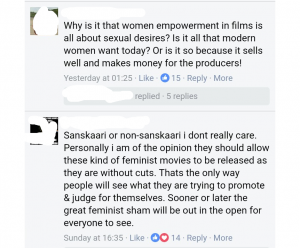 So, you see, why do women need to be so sexually active?

Why should they have sexual desires?

Why show so much of women’s skin onscreen to prove your ‘feminism’ point?

You are a slut if you want any kind of physical, emotional, or sexual freedom!

I wonder whether these dude bros have the same questions when titillating movies such as Grand Masti and House Full get released. I have a feeling that just like our sanskaari Censor Board, these men are also okay with women being objects of sexual desire, women being called ‘bidis’ or ‘tandoori murgis’, but the moment a woman expresses her sexuality or her desires, they seem to go, ‘Tauba, tauba, such a slut!’

I’d end with a dialogue from the movie which seems like a fitting reply to these men.

Yes, dear men, why are you so afraid of our freedom?

Hope In A Tube – Whose Lipstick Is It Anyway?