Ratno Dholi, Jenny Bhatt's translation of Dhumketu's short stories evoke nostalgia, but might just have lost some nuance in translation.

Ratno Dholi, Jenny Bhatt’s translation of Dhumketu’s short stories evoke nostalgia, but might just have lost some nuance in translation.

When I was a child, I spent some of my formative years growing up in a small town in Gujarat. They were some of the best years of my life, but also, unfortunately some of the haziest. It was a time of innocence for me, and so it is as if everything I can remember from back then is covered by a rosy hue.

As I held Ratno Dholi in my hand, I don’t know why, but I expected that Gujarat of my childhood to leap out at me. I didn’t get that, but what I received has certainly made me want to question my own perception of my past.

That, in a book, is always a good thing.

Dhumketu is the pseudonym of Gaurishankar Govardhanram Joshi, a prominent writer in Gujarati, and one of the pioneers of the short story form. For Jenny Bhatt, translating his work has also been personally meaningful, because Dhumketu was one of her mother’s favourite writers.

As she writes, he describes the short story as, “an incomparable flower in the garden of literature, as delicate as the juhi, as exquisitely beautiful as a golden bird, as electrifying as a bolt of lightning. For him the short story roused the imagination and emotions by saying what it must, through allusions and sparks.”

No wonder then, that he named his four (out of 24) of his short story collections (including the very first one), Tankha (meaning sparks), and that his stories are very much like these flashes of light. They illuminate, and then fade out, leaving the reader with an afterimage that lingers.

Exploring the minutiae of human lives

Dhumketu is more interested in the minutiae of human lives, than the grand principles they may espouse. He focusses on inner lives, rather than social context. The way the interaction of caste, class, and gender in the lives of his protagonists leads them to think and behave, is a subtle sort of social commentary, much of which is relevant even today.

For example, in many stories, the characters ask about each other’s caste, or casually mention it while talking about another person who is not present, and more often than not, a person’s caste does have something to do with how they are treated. He offers no critique of the caste system, but in the the way it  shows up repeatedly, it becomes a stark reminder of just how important caste is in Indian society.

Not just stories from Gujarat

I say Indian, and not just Gujarati, because Dhumketu’s stories are not exclusively set in Gujarat. The Queen of Nepal, for instance, is set near Darjeeling, and Svarjogi, in a village near Mysore. The work of the author then, is not necessarily geographically bound.

Nor is it bound by any specific genre. Tears of the Soul is an excellent piece of historical fiction, and one of my favourites in the book. It takes us back to medieval India –to Vaishali, and into the life of Amrapali, forced into becoming a courtesan. The way the author has written her, she emerges as a defiant hero, rather than as a victim of circumstances.

Similarly, The Rebirth of Poetry is a wonderful SFF tale, set in an ‘utopian’ future that values uniformity, and shuns individuality. I won’t tell you more, because it is a treat to read, and I don’t want to spoil it for you.

Writing through the lens of his privilege

As a person who reads more contemporary fiction, there were multiple stories where something struck me as problematic, or too simplified. However, the translator is aware that this might be an issue, and states in her introduction that, “we must acknowledge that we have the benefit of hindsight about our past societies while Dhumketu had the unavoidable biases and prejudices of a middle-class man of his time.” Better then, to study these artifacts in the writer’s work, the same way an archaeologist would study a find – not to replicate in today’s world, but to seek to understand the past.

In fact, Dhumketu himself was not averse to revisiting his own work. Two of the stories, which the translator discusses in great detail in her introduction, also caught my notice, because of their similarity. Both deal with the idea of a poor Brahmin being wronged by a feudal lord, but where The Dispenser of Justice, becomes about exacting revenge, The Worst of The Worst becomes about getting justice. There is also a difference here in the narrative style etc, which the translator comments on in detail, so I won’t go into that, but I found these very relevant to today, where we have questions about extra judicial killings and due process, given a flawed judiciary and a broken democracy,  looming in front of us as a society.

Some things lost in translation to a non-native reader

Another difficulty I had as a reader, is that perhaps because I have limited knowledge of Gujarati, something was lost in translation for me. This is no fault of the translator, because some things just don’t cross that bridge when it comes to language. I suspect that if I had the cultural and linguistic background, I would have cottoned on to some of it, but as of now, I struggled to tease the meaning out in some places. For example, the lines, “Even in the jowar she made there would be a ‘little more sweetness, little less sweetness’ rolled in so naturally that the taste of it lingered in the mouth.” I suspect that this is a Gujarati idiom that doesn’t translate. I understand the approximate meaning, but am left with a yearning to understand it better.

The story that the above lines are pulled from, When A Devi Ma Becomes A Woman, is another favourite of mine from the book, and is based on a famous story by Maxim Gorky. It is a poignant note about the tendency of men to glorify women as “goddesses.” 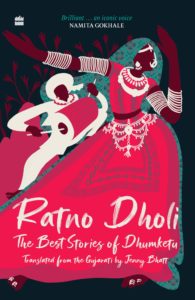 Ratno Dholi is not a feminist text per se, but many of Dhumketu’s female characters are intensely memorable, because they are so well written. Even when they don’t necessarily have agency, or even when they are primarily seen through the eyes of the other characters, they are more than caricatures. There were few stories where I was annoyed by what I felt were stereotypical representations, but as I have already mentioned above, we must put that down to the fact that these were written in a different time.

I will be honest, and say that I did not immediately fall in love with Ratno Dholi. However, the book did grow on me eventually.

Dhumketu’s layered exploration of human psychology and behaviour are what make his short stories so impactful. There is definitely a master-class spread out across these pages for those who are interested in the technical aspects of writing short stories. Jenny Bhatt’s translation is nuanced but simple, and does justice to these stories.

Do pick up Ratno Dholi. We need more work in translation, and this is a brilliant effort to bring attention to a body of work that must not be ignored.

If you would like to pick up a copy of Ratno Dholi: The Best Stories of Dhumketu by Jenny Bhatt, use our affiliate links at Amazon India, and at Amazon US.

Image source: a still from the film Mirch Masala and book cover Amazon