Friends For Floods Is Working To Help Women Cope With The Assam Flood, You Can Help Them Too!

Friends For Floods a youth-led organisation in Assam is helping women during floods with a sanitary napkin donation drive. Here is how you can help them!

Friends For Floods a youth-led organisation in Assam is helping women during floods with a sanitary napkin donation drive. Here is how you can help them!

Assam is geographically, a flood-prone area, as it is — sandwiched between the Brahmaputra river and the Karbi Anglong Hills. The annual floods are something the people of Assam are almost immune to. However, the flood this year are worse for the people since we are also in the middle of the COVID-19 pandemic.

Till July, the floods affected around two to three million people in 27 districts and claimed the lives of more than 60 people. More than half of the area of Kaziranga National Park and Pobitora Wildlife Sanctuary are affected by floods forcing animals to move to other places.

To help the people of Assam several government initiatives, organisations and NGO’s have been working to provide relief. However, during emergencies such as floods, first responders have a tough job setting priorities. Similarly, most organisations providing relief tend to forget including sanitary napkin in the kits they provide.

Youth-led organisation Friends For Flood in Assam is helping the women during floods and breaking the taboo around menstruation. They are doing so with their sanitary napkin donation drive and menstrual hygiene camp.

What is Friends For  Flood?

Eesha Singh, Subhashish Dey, Krishanta Bordoloi and Joanna J. Thabahn are the founders of this. The four friends were born and raised in Assam and are currently home due to the pandemic.

They have witnessed, firsthand the floods since their childhood. Thus, they believe that spreading awareness is vital. At the same time, they also work toward reaching out to the affected people. Friends For Floods is a campaign they launched to raise funds and directly reach out to the victims. 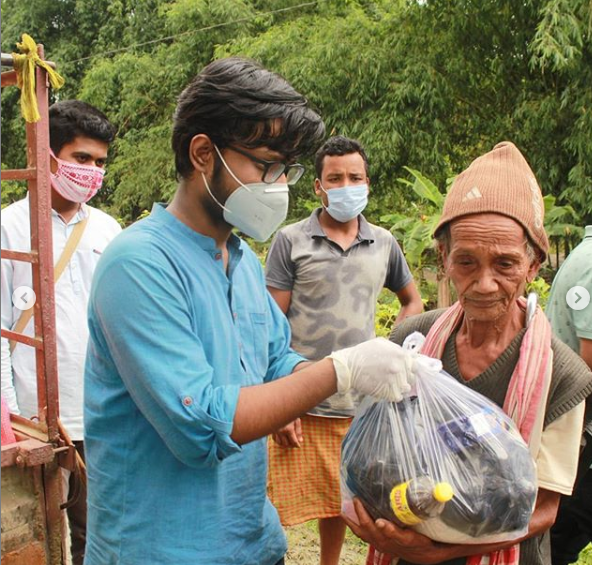 The organisation provides basic relief with every donation that they receive. They directly reach out to those people who have been affected by the floods and provide them with relief kits.

These kits include sanitary products and a ration kit. The ration kit consists of basic essentials like three kilos of rice, one kilo dal, a litre of mustard oil, a kilo of onions and 2 kgs potatoes and 1/2 kg salt. It also has a sanitary kit that contains one bar of Dettol soap, one detergent bar, one packet of sanitary pads, a packet of mosquito incense and four masks. The organisation also raised Rs. 204,093 through a Milaap Fundraiser that was in that was initiated in collaboration with BTS Army. With the money they received, Friends For Flood reached out to more than 2000 people across six different locations in the state.

How do these floods affect women?

Almost half the population in the state comprise of women, which means a similar ratio is seen in the flood relief camps. Ours is a society, where despite more than half the population needing it, menstrual hygiene products are not considered as essential products.

At times, in disaster relief camps, menstrual products are neglected in relief packages. The biggest example of this is the essential items list at the beginning of the national lockdown in March. In the initial list, of essential items, released by the government, there was no mention of sanitary napkins as an essential item!

This was the very reason that Friends For Flood started the Sanitary Pad donation drive.

Providing relief and breaking the taboo around menstruation

“Being a woman, I imagine myself on my period in a heavily crowded relief camp with people from different places and cattle. My cramps are kicking in, and I don’t have any money nor do I have any sanitary napkins. It’s a pretty devastating situation to be in,” said Eesha Singh, one of the founders of Friends For Flood.

When they started their groundwork, the team mostly included men who would travel and distribute the relief kits. But then the question of what about women struck them.

Thus, they decided to start sanitary pad donation drive. The prevalent taboo about menstruation still exists among the people of Assam. Which was why, having a conversation and distributing sanitary napkins was a great challenge for their team.

Eventually, they managed to establish a team of four women, three in Digboi, Assam, and one in Jorhat, Assam. With the funding they received, they bought sanitary napkins and distributed them.

The taboo surrounding menstruation also made them conduct a basic menstrual hygiene awareness camp. Here they emphasised on the importance of using sanitary napkins and the need to maintain hygiene during menstruation. 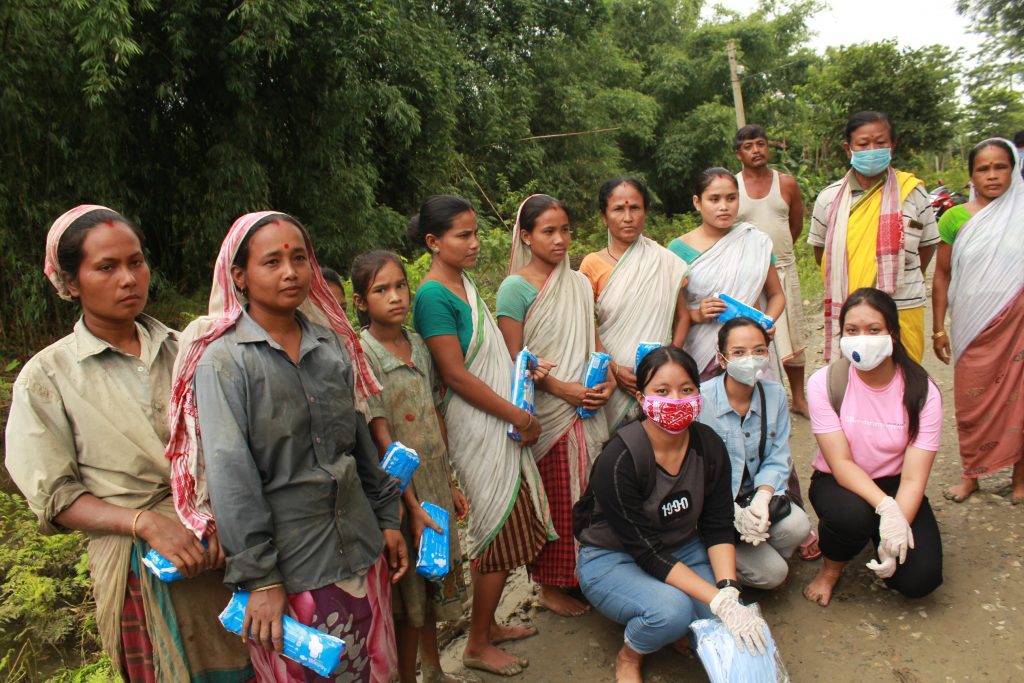 “Over the last month, we have successfully conducted two sanitary napkin donation drives and menstrual hygiene camps in two locations – Boguribari village in Dhola and Borbheti village in Teok. The current outreach of our drive has been 200+ women. We’re hoping to continue doing so with the funds we receive,” said Eesha. 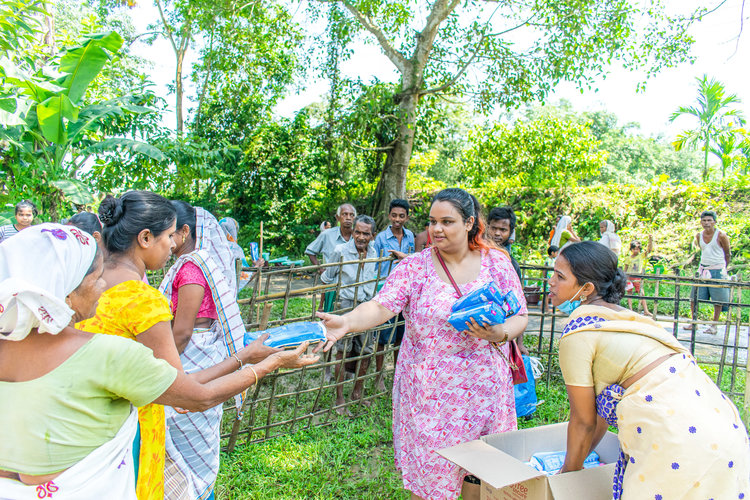 How can you help them?

According to the Assam State Disaster Management Authority (ASDMA), more than 3000 villages are affected,. And as much as 1.28 lakh hectares of agricultural land is submerged while 44 thousand people living in relief camps. Barpeta is the worst-hit region with more than 5 lakh cases.

Friends For Flood is not a registered NGO but they are planning to do so once the pandemic is over. They are doing their bit to help the flood ridden state.

You can follow them here to know more about their campaigns and donations. And you can also find details on where and how their funds are being utilised on the page.