There is deep discomfort with angry women because letting women feel and say what they want to can challenge the status quo.

Anger is not a negative emotion in itself. It is our limited understanding of that makes us think it is.

‘Anger is an emotion. It is neither good nor bad. While uncomfortable, it’s not inherently undesirable.’  This line from Soraya Chemaly’s book Rage Becomes Her reminded me of two specific incidents when I was shamed for feeling angry.

A few days ago a bunch of my students started a discussion on ‘fake feminism’, proving themselves to be staunch supporters of the Not All Men brigade.

No amount of reasoning with them could make them realize how flawed their thinking was.

In fact, contrary to my expectations of helping them understand feminism better, they displayed textbook behavior of sexist entitled jerks. There was gaslighting, exaggerated claims made and false statistics cited resulting in a relentless display of sexism and misogyny. They shamelessly hogged all the space and time to the point of shutting me and their own female batchmates down, and in the end callously asked, ‘Who stopped you from speaking?’

Needless to say I was angry. No points for guessing that their immediate response was, ‘This is the problem, these feminists can’t talk without getting angry.’

Never mind that the reason for my anger was their own behavior which is what feminists have been fighting against.

So obviously, I was angry. Anyone in my position would have been. But the truth is I was not angry that day for the first time. I have been angry for a while now. For several months, actually. Possibly, years.

Include the many angry women before me, and we have been angry for decades.

Talking about myself, specifically, the anger had been building up for a while now.

The current political, social, economic state of my country only added to it. No thanks to the lockdown, things came to a head a few months ago, and I exploded in a ‘passionate’ rant where, in an attempt to express and verbalize my anger, I  said all that I had been bottling up inside me. The post was a desperate plea for understanding and empathy. And it said so too in no ambiguous words.

And yet, someone chose to police me on my tone and choice of words.

It left me even more angry. Hurt even. And, miserable. More so, because this person was a woman. It reminded me of all the times women had called other women ‘angry feminists’.

It led me to become even more angry and retaliate with not just unfriending this one person but many others. One may call this an overreaction. But is it really, an overreaction? Am I wrong in being angry with what my male students and a female friend said?

I have been reading Rage Becomes Her by Soraya Chemaly for several months now – a little bit a day. And I cannot possibly begin to explain how this book has not just given me comfort but also courage in admitting and embracing that anger.

With decades of research, innumerable sources, interviews, and interactions, the book is a comprehensive and exhaustive work on understanding women’s anger and owning that anger as a catalyst of change. From analysing common behavioural attitudes of those who deny sexism even exists to developing ‘anger competence’, the book contains all that you needed to know about being one of the changemaker angry women.

Every chapter of the book made me nod in agreement because it was so relatable to what I had personally experienced. And explained it too.

‘We are as exposed to sexist ideas as men are and often responsible for enforcing them. Denigrating other women can be a bloodsport.’

Whether it be about the petty but predictable reactions I got after I shaved off my hair or the students who vehemently refuse to check their privilege and problematic behaviour while ranting against ‘LSR girls who are just too much’. Whether it be the advice I received in response to my angry rant on Facebook – ‘Watch your tone, girl’, or whether it be the age-old social stereotypes enforced on women to be well-mannered and polite; all of these are nothing but further attempts to control women’s actions and behavior. The book admirably and skilfully explains these invisible but effective tactics at compounding the problem.

That the silencing of women was already a tool of violence is something I had understood. But it wasn’t something we could be angry about. We had to be polite even while expressing our displeasure, it seemed.

But what this book did even more was allow me to understand why I was so angry in the first place. And why those saying ‘Uff! But you’re so angry’ are a part of the same problem.

I was angry. I am angry. And, thanks to this book, I’ve begun to embrace it.

What Chemaly says in the book then echoes my own sentiments. ‘I have since learned that my rage is a critical part of my self, and it is a part of myself that I have grown to respect and love instead of suppress.’

The first step to solving a problem is knowing there is one.

It is evident then that the problem isn’t our anger. It is the lack of understanding about where our anger stems from.

‘Their anger isn’t the problem. A lack of understanding their anger was.’

The book helped me come to terms with what my students and the well-meaning friend said.

Not because I saw them as the problem but because I recognised those words and actions as deliberate and conscious attempts to control and limit what I was allowed to feel or say. And that too, as I had begun to understand, was violence.

‘That there would also be people who are deeply uncomfortable with your anger. That those trying to police you are displaying laziness, dismissal, and even abuse. That that person, and not you, is part of the problem.’

It is because of this unchecked violence that continues even today that we are still angry women. Crimes against women are at an all-time high, yet a huge section of society deliberately chooses to distract and deny from this problem by crying ‘Whataboutery’ and ‘Fake Feminism’. It makes us even more angry. Which in turn leads them to calling us ‘angry feminists’. There is deep discomfort with letting women feel and say what they want to, because those in denial or indulging in distraction do not want us women to challenge the status quo.

We are angry women, yes. But what do we do to not let that anger consume us? How do we channelize that anger into concrete change that makes an impact that is tangible?

Chemaly has the answers.

If there is a problem there must be a solution too

In a dedicated chapter titled ‘A Rage of Your Own’, the book lists 10 measurable steps on how not just be angry but be angry for the right reasons, and also what to do with that anger.

Things like cultivating body confidence, cultivating accountability and, even, reminding you how its important to ‘be brave enough to stop pleasing people, to be disliked, to rub people the wrong way’ are part of this comprehensive list of actionable steps.

The book helped me understand my own rage. And everything in my life suddenly made sense. It was as if I’d put on a new pair of glasses and could see the world in a new light. Not just that, the book helped me embrace and channelize that anger too.

And even with that, it doesn’t stop at that.

Anger is a catalyst of change 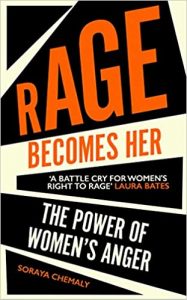 Chemaly reminds us that again, in a few years from now, we’d again be told to speak softly, to be more polite, to control our anger; but why we shouldn’t.

Because ‘if ever there was a time not to silence yourself, to channel your anger into healthy places and choices, this is it.’

Rage Becomes Her isn’t a book then. It’s a lifeline.

And, it should be mandatory reading for every boy and girl. How I wish we could begin with making my students and that friend read this book.

It should be renamed as ‘A Feminist’s Bible’ for it truly is that and more.

Thank you, Soraya Chemaly, for helping me embrace my anger and use it as an effective tool for change.

I promise to ‘Be angry. Be loud.’ And let the rage become me.

If you would like to pick up a copy of Rage Becomes Her by Soraya Chemaly, use our affiliate links at Amazon India, and at Amazon US.

Why Are Women Angry? And Why Do Most Keep Quiet Or Express It As Something Else?

Revel In Your Rage With These 6 Tips Each Time You’re Angry!

What Does It Mean To Validate Feelings?