In an interview, Shruti Hassan accepted that she feels like an outsider in Bollywood. Why don't accomplished actors from other industries get their due?

In an interview, Shruti Haasan accepted that she feels like an outsider in Bollywood. Why don’t accomplished actors from other industries get their due?

With numerous films, music compositions and awards, Shruti Haasan is a well-acclaimed name in the film industry of India. The actor who has a number of South-Indian films to her credit, spoke of how she is still considered an outsider in Bollywood during a recent interview with the Hindustan Times.

Speaking about the divide between the north Indian and south Indian film industry, she said, ‘I honestly have many times felt like an outsider. Especially in Bollywood, there is a whole North-South thing that constantly happens.’

Despite being the daughter of two legendary actors – Kamal Haasan and Sarika- she has still faced some issues staying in the industry. While she admits her surname opened up gates for her, it was still difficult for her to retain herself there in the 11 years of her career.

She further pointed at the hypocrisy of the society and how once an actor starts doing Hindi movies, they are asked to focus only on Bollywood instead of other industries. Somehow people believe Bollywood is the priority industry that the people watch.

Why don’t the other industry actors get their due in Bollywood?

Several South Indian film stars with an established career and experience are still considered ‘newbies’ in Bollywood. A number of actors come to act in Hindi cinema but fade off. If they get their ‘big-budget’ debut, they are given minimal roles. And if not, they are always given an array of low-budget cringe films. They are rarely cast easily by Hindi directors and eventually shift their focus back on their earlier industry. Despite having great a set of south-Indian movies, and even some Hindi movies, several actors have found it hard to establish themselves in Bollywood. Actors such as Kamal Haasan (Ek Duje Ke Liye 1981), Rajinikanth (Andha Kanoon 1983) and Chiranjeevi (Aaj Ka Goonda Raj 1992) gave amazing performances in Bollywood. But were never seen as ‘heroes’ who could make it big in Bollywood.

Bollywood makes lots of remake of Marathi and South-Indian films, and we prefer watching the remake rather than the original. Which in turn establishes the dominance that Bollywood has.

Shruti Hassan isn’t the only one who has faced this

A lot of other actors who worked in other industries have spoken up about the tough time they had in Bollywood. In an interview with Pinkvilla, Taapsee Pannu spoke of her experience. Despite having over 15 films in the South Indian film industry, she was still considered ‘struggling’ in Bollywood.

Similarly, Sairat actor, Rinku Rajguru had to make her debut on an OTT platform. However, the Hindi remake of the film was launched in theatres with the big-name star kids.

Often OTT stars and TV stars who have proved their acting calibre are ridiculed by casting agencies as ‘freshers.’ Even designers ridicule stars who do not come from Bollywood.

In an interview with Pinkvilla TV actress Hina Khan said that when she had to go to Cannes, several famous designers refused to give their dresses to her. They told her ‘we only give our designs to Bollywood stars.’

Does making it big in Bollywood, define an actor’s calibre?

Acting cannot be restricted to language. Content is content in any language and acting is an art that is not defined by a language or a medium. Yet often, making it big in Bollywood is the definition of an actors worth.

Despite India being an amalgamation of plenty of languages and all languages with their industry, the only industry considered massive is the Hindi Film Industry.  South Indian Film Industry in its very own level is massive in terms of content and revenue. Yet, the South Indian actors are not given due respect in Bollywood.

However, things seem to be changing a little now. Acclaimed critics are doing shows with South Indian actors and also reviewing South Indian films. At the same time, several award functions and ceremonies are being held specifically for this industry.

In some ways, it is getting the respect it deserves. But India is a multilingual country. On the one hand, South Indian Industry is getting its due. And on the other, several other language industries are striving to make a mark.

It is high time that we as an audience move beyond our fixation with Bollywood and start exploring content in all languages. With the presence of OTT movies and shows in other languages have gained the medium to reach a bigger mass. So let us respect art as it is irrespective of the language.

Like many, this author initially felt Kangana Ranaut's recent Aap Ki Adalat interview was too 'conveniently' timed. What made her rethink? Read on! 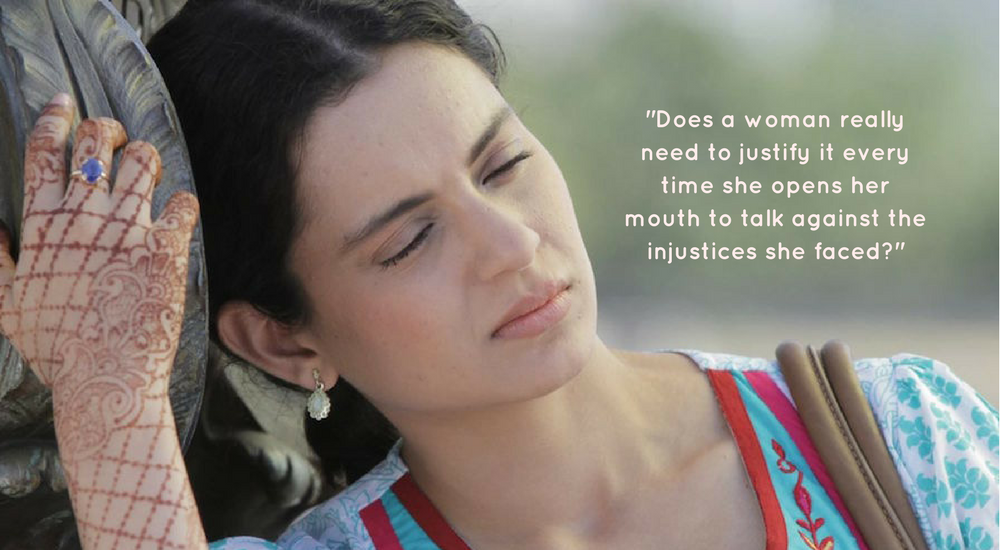 Like many, this author initially felt Kangana Ranaut’s recent Aap Ki Adalat interview was too ‘conveniently’ timed. What made her rethink? Read on!

Kangana Ranaut doesn’t believe in being diplomatic. Kangana Ranaut doesn’t give a damn to what anyone thinks about her – be it high profile directors who can make or break an actor’s career, be it the privileged sons of the biggest names in the Bollywood industry, be it the Women’s Commission (which according to her can be bought with enough money), or be it the awards functions filled with glitz or glamour and sponsored by the most influential funders of the film industry.

And you know what makes her a woman to look up to even more? She doesn’t even hesitate to admit when she herself has faltered. I was already in awe of her as one of the most talented actors in Bollywood in recent times. However, her recent Aap Ki Adalat interview made this ordinary girl fall even more in love with the Queen that is Kangana Ranaut. She is truly an inspiration for women like us, who come from humble backgrounds and who are striving to make it big based only on our own merits.