The Little Matter Of Indulging In Sex As A New Mom: Why Isn’t It On My List Of Priorities?

Think. Where does sex figure in a new mom’s schedule or even life? Is it even a thing? Pooja Pande banishes all such doubts in this excerpt from her new book Momspeak.

For me, sex has always been in the realm of delicious possibilities, one of the definitive joys of being alive, really, when there’s mostly only doom and gloom, and the quotidian. Plus, it’s free. Win-win! I, for one, had never understood why sex had always been painted as something the boys wanted and something the girls just about tolerated—like the joke about the wife who tells her husband to ‘get it over with’ so she could go have a bath once and for all—‘ek hi baar nahaungi’ was the exact line—until I realized that this too was a carefully crafted conspiracy to maintain the status quo. But since upsetting the apple cart came naturally to me, I now wondered why was it that sex hadn’t been anywhere on my list of priorities lately? So much so that it seemed almost alien, something from a past life, perhaps? She said ‘resume’, which presumably meant there was a temporary pause, but for the life of me, it was impossible for me to remember when I’d last got laid. Even the thought of it—along with that casual phrase of ‘getting laid’—was nothing like an old friend, you know, someone familiar you’re pleasantly reacquainted with? Why was this happening to me?

These are rhetorical questions, I realized soon enough, because in those first weeks of motherhood, sex, or even the idea of it, does not manage to make a nano-dent in your headspace. Where, after all, amidst the sleepless nights, ruminations on the baby’s legendary black potty of epic proportions, sanitary napkins, nursing nightmares, first visits to paediatricians, choosing the right paediatrician, close monitoring of the baby’s weight (if she’s not picking up, you’re most definitely killing her), timing something as basic as when can I go for a bath, and then thinking only of how the baby must have surely rolled over and died by the time you’re done towelling yourself—yes, at a time when the baby cannot do so much as wiggle a toe—would you be able to fit in even a quickie, I ask?

For a while there, I panicked. Is this my new life, I thought? Was I now banished to a sexless future? Into a pit where desire goes to die? An eternity that stretched into days upon years of never making love? Was this hell? Abandon hope (and horniness), all ye who enter and all that? Suddenly Chandler’s joke of one’s virginity growing back didn’t seem as funny, because maybe, just maybe, it was possible?

Also, urgently, what was I doing indulging in these ‘base’ thoughts, born of our ‘basic’ instincts, at a time like this? Was there any living soul I could say these things out loud to? Would I even be able to formulate these paranoid thoughts into coherent words?

The rhetoric, though, wasn’t simply hyper drama unfolding in my head; it found echoes in real time, in the real world. ‘Your husband is never going to want you the same way again’, was a much-bandied-about ‘truth’, emanating from the fact that not only has he lived through your pregnant phase, he has seen you struggle in the labour room, in excruciating pain, out of breath, red-pink-purple-blue in the face—maybe even witnessed you shitting or peeing yourself as you pushed and pushed for dear life, yours and the new one’s. ‘How can he think of you that way now, after he’s seen you, your body like that?’

This that was paraded like a most understandable truth of sorts. Something a mother must simply swallow, preferably with her halo shining atop her head, as she sacrifices her sex life—most unimportant now on her agenda anyway, since the baby it was needed to create is now here, happy and healthy. In her much-acclaimed treatise of a book, Cool Men and the Second Sex, Susan Fraiman introduces the term and concept of ‘sodomitical maternity’. While she uses it specifically to make a point about queer motherhood, what it essentially indicates is the mother’s sexuality that is ‘in excess of the procreative capacity’—a mother ‘with sexual desire to spare—beyond the required amount needed to reproduce’. Talk about measuring life with coffee spoons—can we have ‘required amounts’ for something as vivid and free as sexuality? It is almost as if motherhood and sex—inherently linked, by virtue of mere biology, cause and effect—are treated as two subjects that live on parallel tracks, in a never-the-twain-shall-meet equation. With one (only) reality now, it is time to bid the other farewell. Forever. And of course, between motherhood and sex, it’s never entertained, for even a second, that you have a choice, or would even want one. There’s a palpable fear, in fact, of what a mother might just choose if she indeed, in some blue-pill-red-pill moment, had to.

Excerpt from Momspeak by Pooja Pande shared with permission from the publishers Penguin Random House. 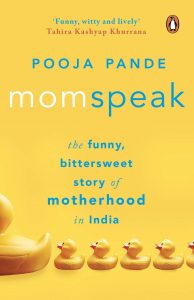 In Momspeak, Pooja Pande boldly reveals the reality of motherhood, much glorified but barely understood in India. Exploring the spectrum of experiences mothers have as women, as humans—from ecstasy to depression, jealous possessiveness to indifference, exhaustion to sensual desire—she reveals the personal, social and emotional roller-coaster motherhood can be. Through vignettes of her personal journey, and hilarious and poignant episodes in the lives of different mothers—married, divorced, single, queer, adoptive—Pooja celebrates and shines new light on this transformative, life-affirming experience. Whatever kind of mother you are, you will find your truth reflected in these pages.

Pooja Pande is a writer, editor and a TED Speaker who heads Strategy at Khabar Lahariya.

If you would like to pick up a copy of Momspeak by Pooja Pande, use our affiliate links at Amazon India, and at Amazon US.

Shaming Sex Workers Doesn’t Make You Sanskaari, It Only Shows Your Shallow Mindset!

Would We Still Freak Out If Our Moms Find Condoms Or Pregnancy Test Kits In Our Bags?