My grandmother and her sisters were not conventional 'strong women'. Yet, their quiet strength shines through their lives.

My grandmother and her sisters were not conventional ‘strong women’. Yet, their quiet strength shines through their lives.

So life gave you lemons and you made lemonade; but what do you do if life gave you only lemon peels? You turn it inwards and light a lamp!

Here is one of my earliest memories of my grandmother. In around 1990 she was posted in Trivandrum, where we would go there to visit her during the summer break and stay with her at the government quarter she was given. At the time, she was working as the Superintendent at the Veterinary Department and was the sole owner of my permanent address for many decades.

Since I was a good girl, she would take me to office with her once in a while and the 5 year old me would spend the entire day at her office with her, giving people their files and me playing the role of the office gopher in a Government office.

On the way to office, we would stop by this temple and light the lamps in lemon rinds.

A woman who worked for a better life

My grandmother was born CP Anandavally in 1936 and was the eldest amongst four daughters. Though some communities in Kerala are matrilineal and the family name CP follows the matrilineal system, it was still considered a great shame that there were no boys born. The author’s grandmother (centre) with 2 of her sisters, in her 40s

The girls lost their father to TB which was prevalent in India at the time. Long story short, my grandmother learnt the lesson to be independent very early in life and if there is one word I would use to describe her, it’s independent!

She started working soon after school and constantly kept learning by going for typing classes and anything else which she thought would give her and her sisters a shot at a better life. She soon fell in love with a very handsome man and got married – love marriage was as much of a taboo then as it is now. But she describes those days of her early marriage fondly as she talks about the struggle of seeing through the education and marriage of younger sisters from her family as well as his. 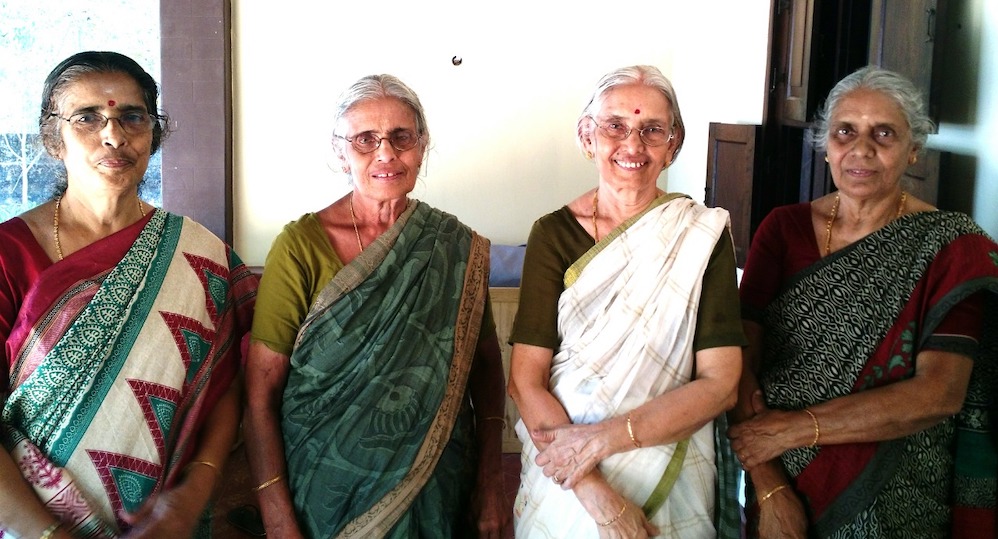 The author’s grandmother (1st from left) with her sisters, in a recent photograph

The four sisters were each independent and in many cases, the backbone of their families. They have survived illnesses, losing a husband too young, losing a child, alcoholism, ups and downs, and many hardships that came their way. From a joint family, they later fractured into independent units but bought their houses close to each other and have been with each other through thick and thin

All the sisters retired from jobs that they worked passionately for all their lives and were an asset to their widowed mother who they looked after in her old age. While my grandmother retired as Senior Superintendent in the veterinary department, her second sister, CP Soudamini retired as a headmistress, her third sister CP Swayamprabha retired as revenue officer from the Corporation of Calicut and the youngest, CP Lakshmikutty retired as the Administrative Assistant from the Forest Department.

They all retained their maiden names as was the culture in their times and passed on the surname to their children. It was later in my mother’s time that maiden names were changed after marriage and the husband’s name taken.

I realize how rare it was for women in India of the 1950’s to be working women, so I once asked her how it was working in offices at her time. She told me that in her experience, her office in the initial days was like a family unit and it was only later that competitiveness grew.

The fallacies of the single story holds true for women indeed; there are so many sides to our stories, so don’t you go judging us!