I Believe Stories Are Very Powerful, And Can Help Healing In These Traumatic Times

Anukrti Upadhyay, author of Daura and Bhaunri, takes you headlong into the rich world of folktales in her books, and tells us how her childhood was full of these.

Anukrti Upadhyay, author of Daura and Bhaunri, takes you headlong into the rich world of folktales in her books, and tells us how her childhood was full of these.

I grew up in a household that was rather inordinately rich in stories. Everyone in the family told stories – my father made them up to distract me from persistent ear-aches, my mother told me the stories she had heard as a child growing up in a small desert town, my nanny told me folk-tales she had heard in her village as a child and a young woman before her husband brought her to the city, and my grandmother and aunts regaled me with old family lore.

Amongst the first stories I heard were about the founders of my father’s family, a fascinating tale originally told by bhats, the oral genealogists. It was a dramatic and fast-paced story, full of  swashbuckling sword-fights and horse-rides and, like all folk-tales, had a happy ending – two brothers had a quarrel with a king and left his court to lead a nomadic existence in the wild hills and valleys of Yamuna; eventually the king recognised their valour and learning, and made peace with them.

My mother’s family was rich in dramatic stories too  –  an ancestor once challenged a ghost to a wrestling match (he lost and got a raging fever to boot, which continued till the next full moon), yet another ancestor turned into a snake after death and remained a benign presence in the ancestral house for a long time, and a learned ancestor summoned rain through penance to end a terrible drought. Specific stories were told for each fast day and feast day, and there were multiple stories, to be told sequentially, for every auspicious occasion, of which there were many.

Most of these stories followed a formula. They revolved around women – a mother who forgot vows made to a vindictive deity, a wife who broke a fast, a daughter who injured a hedgehog’s brood. This breaking or imperfect observation of rituals led to ruination of their families. After many trials and tribulations, the women managed to win back the favour of the deities and resurrect the dead and revive family-fortunes.

I also remember being told tales about powerful local deities – Pabu ji, Goga Ji, Bhaumiya ji, none of who feature in the numerous Hindu pantheon. These were tales of valour and boon-giving where the deity rescued the village-folk’s cows, or cured them of snake poison, or caused clouds to empty their stores of water so the crops could flourish.

Occasionally folk-singers and story-tellers told these stories to the accompaniment of desert lutes and cymbals and women sang them as hymns in village temples.

Besides these, there were other tales, funny and fantastical, witty and wise, of a boy outwitting hungry lions and roaring rivers and poison-fanged snakes to visit his grandmother, a sister braving censure and criticism to protect her brother’s life, a silly farmer who instead of shooing away birds, foolishly invited them to eat his crops, a king who thought he was the wisest and his comeuppance.

There were romances of Dhola-Maru and Ratansen-Padmavati, and of princes disguised as nomads and princesses who turned into fish, all ending in decorous marriages and prolific progeny. 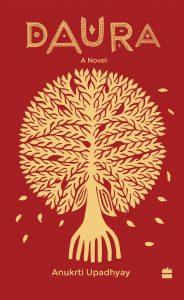 From all these stories, I learnt about the desert and its folk, about their food and music, sand dunes and camels and the harshness of ever-burning sun and fickleness of rain.

They spoke about kinships and alliances, about family and loyalty. They gave me a sense of community, enriched me and connected me to the culture of the place I was born in. They kept a vanished world alive in memory and made me nostalgic for that which I had never experienced.

They also made me question the role of women, the inordinate burden placed on them to hold family and social structure together. If women and their actions have such tremendous impact on the well-being of everyone, I wondered, why are they considered weak? How come they do not see this strength and in story after story, follow husbands and sons and brothers unquestioningly? These early musings later led me to explore feminist philosophy and literature. 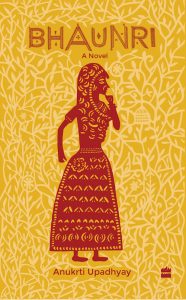 The stories, and the memories conjured by them, sparked my imagination. My twin short novels, Daura and Bhaunri, published by HarperCollins last year, were both set in the desert and assumed, in parts, the form of folk-tales. When I was working on them, the motifs from the folk-tales – full moon, months of rain, hardships and yearning of love, magic and resolution, merged with the stories of Daura and Bhaunri in an inextricable manner.

Whilst the folk-tales woven into both Daura and Bhaunri are not ‘real’ folktales, in the sense that they are not re-tellings of old stories, but are imagined tales in folk-tale format, they emerged organically with the flow of the narrative. The mud-houses and nomads, principles of devotion and loyalty, earthy wit and courage, everything the folktales embody became part of the stories of Daura and Bhaunri.

The folk-stories that I had heard ultimately led me to write my own stories.

Watch Anukriti Upadhyay speak of how stories are very powerful, and help to increase connectedness, especially in times when we’re lonely, and about her books.

We’ve a great lineup of women authors from HarperCollins India as part of #SheReads, and it promises to be both fun and informative with exclusive content and interactivities coming forth from these authors. As we begin, should you want to up your reading game alongside, here’s a great chance to avail of attractive discounts on Harper eBooks via links here.