United Nations Women Creates An Imaginary Gender-Equal Nation; But Is India Even Ready For It?

UN Women has created an imaginary utopian society that has achieved gender equality. However, when you compare it to the current state of India, are we anywhere there yet?

Today, a gender-equal nation remains a far-fetched fantasy for most women. And in order to visualise that kind of world, UN Women recently conceptualised an imaginary country that has achieved gender equality. They named this utopian world Equiterra- the land that alluded to equal terrain.

This ideal land of utopia has a few specific arenas. And not very surprisingly, India is quite far from become all the goals of becoming Equiterra. I looked at their goals and here is how India fares in each of them.

The place where all the gender stereotypes are smashed. No matter what stereotype it is- whether they pertain to the professional choices or ‘lady-like behaviour’ or ‘manliness’ that the society slaps on us. 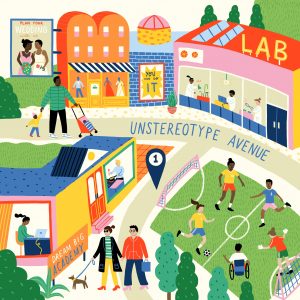 There is growing fear of diversity in being an ‘Indian woman.’ Women are stereotyped more and more and there is a growing intolerance and resentment for any kind of a contrary opinion. And if the opinion is voiced by a woman, whether on social media, her social circles or even on mainstream media, she is called a number of names.

‘Unstereotype avenue’? We are far far away from it.

Here on Violence-free alley, women are free to speak their mind, roam the streets when and however they want. They aren’t even judged for what they wear! All forms of gender violence has been reduced practically to none! What’s more, including intimate partner violence is rarely even reported.

But here in India, violence against women has seen a steep rise in the past few years. Sexual harassment and abuse remains the ugliest aspect in this society that endorses ‘worshipping women’ as Devis.

Women and men are paid equally for equal work, there is no division of labor based on gender. Across sectors, women are encouraged to keep their jobs even after the birth of a child and even men are given paternal leaves! Since, they are encouraged to work, women are steadily becoming industry leaders too. There is no glass ceiling here, folks!

Speaking of glass ceilings, the one in India is made up of tradition. We see a very few women at par with men in the highest offices. Indian women are paid less, they are restricted by child care duties to obtain full professional potential. And they are often employed as ‘unpaid labour’ and are thus, underemployed too!

Here at Equiterra, boys and men do NOT live under the burden of masculinity. They show emotions, they cry, they aren’t ‘the strongest’ and convert their ‘manliness’ related upbringing into being a human above all.

However, back in India, toxic masculinity blended with the cultural expectations of being a ‘mard’ is massive. Men are ridiculed and even reprimanded for showing emotions. They are ‘supposed’ to be aggressive and they need to ‘control their women’ in order to be respected. And obviously, fathers are not loving or sweet, they ought to only be feared and despised.

Inclusion Square is exactly what it sounds like! No one is judged on the basis of their colour, body, disability, or even sexual orientation. Everyone is welcome at Inclusion Square, rest assured, you will make a few friends here. And people with disabilities have access to absolutely everything in the society.

As dreamy as that sounds, we’re still not there. We are still homophobic and transphobic as a society. Children and even adults with disabilities are given those fancy labels like ‘specially abled’ or divyang but they are still stigmatised. There are laws, on paper, for the marginalised groups. But there is no implementation. Mindsets, meanwhile, are still very very rigid.

The climate is changing and people know about it! People are accepting climate change. Here on Climate Action Street, everyone does their little bit to protect the environment. Everyone in Equiterra is actually aware of the issues with the climate.

While India boasts of worshipping numerous ‘nature gods,’ and some rivers too, we still have some of the most polluted cities in the world! And each passing day, we are caring less and less about our carbon foot-prints.

In all institutions there is gender-balanced leadership. Women are represented equally in the parliament and even in corporate offices, men, women and non-binary people and people of colour walk together.

Well, India has had a woman Prime Minister and a woman President too, and we have women at several high posts. However, the representation of women in public spaces and offices of power is very low and limited.

Education is a priority and is inclusive, diversity-oriented and wholesome. Girls, in Equiterra, are encouraged to learn and go to school and have no fear of being pulled out from school to be married off. All children are looked at as assets for the future, rather than burdens.

But in India, education for girls is still a major gray area. Families often put boys’ education on a top priority rather than girls’. They are often married off at a young age and unable to connect their learnings with either higher education or even employment.

If they are ‘allowed’ to study further, they are constantly taunted about it or made to feel shame and guilt.

All women and citizens in Equiterra have the choice to do whatever they please. Right from women having the freedom to wear what they want to loving whom they want, Equiterra does not discriminate. What makes it even better is that reproductive health is talked about and discussed seriously between parents and their children and at school too. And women, of all ages, have the right to free and non-judgemental HIV testing and treatment. In India, on the other hand, women still don’t have the freedom to wear what they want, leave alone choose their partner! They are given ‘choices’ but these choices are usually not as free as they are made out to be.

Equiterra is a part of UN Women’s Generation Equality campaign. It urges everyone to work towards this ideal utopian society in whatever way they can.

In conclusion, it would not be wrong to say that Women’s Day and feminism still have a long way to go in India, especially if we want to reach Equiterra. And till then relating discourses and events to real life changes and how women lead their lives, it would be sheer hypocrisy to wear the halo of ‘women empowerment.’