‘Think Of Your Family’s Honour,’ The Rapist’s Wife Had Told Her

She found it difficult to remember all the details but had a strong urge to find out. 'Did Amit...' she thought to herself as her sister walked in.

She found it difficult to remember all the details but had a strong urge to find out. ‘Did Amit…’ she thought to herself as her sister walked in.

The sun light coming through the window pierced Simi’s eyes as she squinted to look at the wall clock. It was almost afternoon and she was at her sister’s house. A shiver ran down her spine as she felt raw scars on her inner thigh. Something felt odd as she tried to recollect the events of the previous night. She remembered being on the dance floor…

The party was on at full swing. Simi was in the middle of the dance floor with her friends, her body gyrating to the rhythm of the beat with perfect precision. The night was young and her boyfriend Amit was in no mood to let her go. With a few drinks too many, they continued their passionate tryst with the music. After the DJ officially announced the wrap-up, Amit walked her to the parking. They were kissing when…

She couldn’t remember what happened next

She found it difficult to remember all the details but had a strong urge to find out nonetheless. ‘Did Amit…’ she thought to herself as her sister walked in and handed her some lemony concoction.

“Here, have this. How many times have I told you to dress properly! This is the last time I am shielding you from dad, okay? Thank Sunil, for driving you back here safely. He told me everything. That boy Amit, is no good. You should stay away from him. Think about your family’s honour, for God’s sake!”

“Wait! What! No. I thought it was Amit who drove me…”, she stammered but her sister had already left the room.

And then, it dawned upon her

Picking up her cellphone, Simi called Amit. He told her that since she was verge of passing out and he too was not in the condition to drive, he had called her sister. Her sister informed him that her husband will pick Simi up and take her to their house.

Amit also told Simi that even in his state, he could feel the brother-in-law being angle when he saw them so close. So he took her and left immediately without acknowledging Amit.

Simi hung up the phone and gasped as a thought struck her.

The truth will come out… sooner or later

“Simi, you are running away from reality.”

“Amit, I don’t know what to do. My parents don’t even know I was at the party. They will be devastated.”

“The truth has to come out sooner or later.”

“But what if they don’t believe me and blame me instead? I don’t even have any proof. I was out in the night with you and moreover, my sister thinks…”

“She doesn’t know the truth yet. Don’t you think she deserves to know?”

“I don’t think she deserves to spend her life with that devil but it will break her heart and my parents to see her marriage fall apart. But how can I go on keeping this secret and pretending nothing happened?”

“Sometimes there is no happy choice, Simi, only one less grievous than the other. You just need to make the right one.”

Simi nodded in agreement. A rapist has to be punished no matter who it is.

Author’s note: A majority of the rape cases fall in the category of acquaintance rape where the victim is vulnerable due to consumption of alcohol/drugs. The majority of sexual assault victims don’t acknowledge that they were raped right away, if ever. The fear of stigma is part of it – a society that blames them for landing voluntarily in such situations. 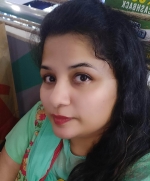 Sheena Jain is an HR professional from Delhi. She loves writing poems and short stories on various issues. read more...