Yes, I Gave Up My Career But I Am Living Life To The Fullest

Living a life without regrets, this mother gave up a career to take care of her daughter before turning to writing! Here’s what happens when you take chances!

I woke up one morning post my first wedding anniversary with a pregnancy test in hand. Now it was obvious for my doctor to suggest the same, considering I was way past my due date. And there it was, double bright pink lines appeared on the test. And voila! It was positive.

Though the news was sudden and unexpected, the response from everyone was as delightful as it should have been. My workplace was happy to accommodate someone who was up for the huge task of bringing another life in this world. The female colleagues went ahead and gave their expert advice on the same.

I wanted to work but I didn’t want to leave

After managing the ups and downs of my pregnancy, my little birdie came into my life. And then life took a turn. Initially, I could hardly pay attention, let alone, adore her due to the excruciating pain of my stitches. Weeks passed and the feeling of doting (read insanely possessive) mother started creeping in.

But as Indian Labor Law would have it, I was supposed to join work after six months of maternity leave. I had already extended it to nine months. The first day back to work, I was super excited- not just to see my office family but that was the only chance I had to shed some kilos.

As I bid adieu to my little one, I felt my heart being pulled out of my chest. I don’t know how other mothers manage this, but I cried and ended up with mascara all over my face. That day, my office saw a zombie walk in through the gate.

I wasn’t satisfied, she wasn’t happy

Weeks flew and I’d come back home tired and dissatisfied. My husband was working from home and taking care of our daughter really well. But I could see something in her eyes- something that told me that she missed her mother the entire day. It may have been the mother in me making these assumptions, but my child was definitely not happy. She was losing weight, was way behind on her growth goals and not as chirpy as she used to be.

One fine day, I decided to quit my job and my husband (I have the best one) supported the decision. I went ahead and submitted my resignation. The bosses, though disappointed, were happy that I was doing what I wanted to.

The changed routine was good

Soon my routine changed to waking up my daughter, bathing, changing, diapers and playing lovely games with her. The house became our playground, legos spread like a carpet. I monitored her growth and as I expected she came back on the growth chart quickly. My little one was missing me! I wasn’t wrong.

There are some decisions in life which might make you question yourself initially. But soon, you realise that they gave you immense strength. Her laugh made my day and also made sure that I had No Regrets of leaving the job I once dreamt of.

After all that was dream before I became a mother. Now I was living a bigger dream, that of motherhood.

I started writing while she was at school

Once she was enrolled in school, I had more time to think about what I wanted to do in my spare time. The few years gap wouldn’t have given me back the old well-paying job. Secondly, I didn’t want to leave my daughter alone, once again. So I wiped the dust off of my old passion- writing!

Six months of late night writings, finally bore fruit when I submitted manuscripts to some educational publishers. Three months later, I heard from a firm who wanted to publish my book- ‘Pre-school Education Management.’ I haven’t looked back since then. One book after another, soon I was also co-authoring with some of the known authors in the field.

My child being happy is all that matters

I was never given the tag of a responsible mother, rather, I was the spoilt one. While most mothers pushed their children to school I was happy letting her take a leave if she was tired. I was never finicky about the cleanliness in my house, my daughter was free to play with all her toys at once.

Whether it was playing with her swimming pool or going to dance class, I always taught her to follow what she wants to. After all her mother also did the same.

Just like any other mother I have no idea what future awaits me. But right now in this moment I am living my life to the fullest, I realised that this was one of the best decisions I took in my life. I was happy that I took this chance rather than regretting what else I could have done for my child. 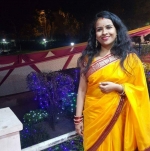 Corporate life to mentoring college students I have been there done that all. Post a