Congratulations To New Mom Kalki Koechlin! 5 Must Know Things About Her Mommy Journey

Everything about Kalki Koechlin’s journey to motherhood from her early pregnancy to the birth of her daughter Sappho shouts out that the new mom is an unapologetic feminist.

So Kalki Koechlin had a baby a few days ago, on the 7th of February. A baby girl. And at every step of the way from her pregnancy to now, Kalki has demonstrated joyfully what a true feminist she is.

Kalki Koechlin has announced today, that on the 7th of February, she gave birth to a baby girl with her boyfriend Guy Hershberg, whom they have named Sappho, (after the Ancient Greek poetess who is a known figure in feminist literature) sharing an image of the baby’s footprints on Instagram.

Here are 5 things about her journey to motherhood, that show Kalki walking the talk about being a feminist.

Have a baby only when you are ready to have one

Kalki is now in her mid-30s. She has been anti-marriage in her early 20s, and even against motherhood six years ago, but surely things have changed for her in the interim period – her utter joy with her pregnancy earlier, and her joy at the birth of her daughter is proof of that.

Babies thrive on mutual love and respect between parents

Kalki has made the choice to have a baby with her boyfriend Guy Hershberg, not giving in to the expectations of matrimony before motherhood.

Kalki has been married earlier, to Anurag Kashyap, but the two separated before they could have any kids. This time around, she has not toed the line every “good girl” is expected to, and has decided that the love between her and her partner is a good enough reason for them to be parents to a child together. 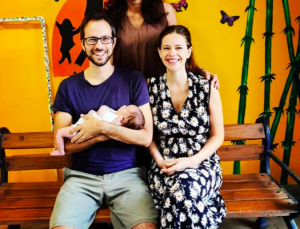 A healthy relationship between its parents is the best thing one can give one’s child, instead of staying in a marriage for ‘society’s sake’ and the resultant discord and trauma in the family. Kalki has also demonstrated that a family can be created this way too, with mutual love and respect, instead of the bondage that an Indian marriage can be.

Certainly an inspiring step for women to look up to.

The post that Kalki has put up acknowledges new mothers anywhere, by talking of the sheer labour (pun intended) that a mother goes through with her pregnancy and childbirth.

Kalki says in her Instagram post, “… respect to all the women who go through the intense and gruesome experience of birth, be it vaginal or c section, so many of whom are not given credit or support for the biggest challenges they face, but are expected to do it out of some kind of duty. The process takes a huge toll both psychological and physical and should have the backing of an entire community to truly heal.”

A fitting tribute to all new mothers. So many of them are shamed for a c-section, so many mothers’ pain and trauma is minimised, and often they do not get enough support from their family and the rest of society, especially in case of a girl child. Kalki’s words should certainly point that out.

Whom she has named Sappho, honouring the oldest known and feminist Greek poetess, also called the ‘Tenth Muse’. Kalki quotes Sappho in her post:

“Some say an army of horsemen or infantry,
A fleet of ships is the fairest thing on the black earth, but I say
It’s what one loves.” ~Sappho~ circa 600BC

Sappho was the daughter of an aristocratic family on the Greek island of Lesbos, and was known for her unapologetic poetry about women’s lives without the male gaze so prevalent in most poetry about women, which included themes like sexuality, wedding ceremonies, motherhood, her love for women – all from a first person narrative. Sappho is immortalised in the words Lesbian and Sapphic. It is therefore fitting for her feminist mother to name her after an iconic woman poet who was also a lesbian, and who moved away from the typical ceremonial poetry to one focusing on emotion.

A sisterhood around is crucial when giving birth

Kalki thanked not just the doctors, but also the women who attended and assisted her in Sappho’s birth, with a picture with them shared on her Instagram. 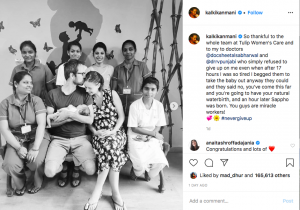 That thanks must mean so much to these women – and Kalki has our respect for publicly declaring her gratitude. After all, 17 hours of labour is no easy task, and it could not have been managed without the help. Believe me, I know. All of us women who have given birth or seen someone giving birth, know.

Congratulations, Kalki, from all of us!

Kalki Koechlin Inspires Women Yet Again, This Time, With Her Pregnancy Announcement