Two feminist icons, Kanhaiya Kumar and Shashi Tharoor, revealed themselves to be ‘woke’ only in our imaginations, by making sexist, transphobic remarks. How do we hope for better men?

I have quite a few of them in my life. Supposedly ‘woke’ men who are closet misogynists. Their speaking up for liberal values often misled me into thinking they were true feminists. But they’re not. And often I realise this after some damage is already done.

Do I wake up and smell the stink? Maybe in the case of the particular man in question. But then, again, I am misled by the next supposedly ‘woke’ man. And I never learn.

This is something that plays out not just in the private sphere, or even in more public spheres like Facebook ‘fraands’, but as we collectively found out to our horror recently, in the big picture too.

In the space of just a week, two men who we thought were ‘woke’, showed us their rotten, misogynist interiors.

When he called out for freedom from the yoke of patriarchy and all that comes with it, so many responded to it. He became a cult figure, the leader who showed them dreams. His standing up for liberal values made us feel he was a ‘woke’ man.

But he turned out to be an idol that had clay feet. In a debate with BJP leader Amitabh Sinha on India Today conducted by Rajdeep Sardesai, he decided to go in for witty soundbytes over sensitive, thoughtful arguments, by asking the BJP leader if he had “worn bangles”.

Casual sexism, coming out so easily. Because the ‘wokeness’ wasn’t real. Deeply entrenched conditioning, sexism that minimises and decreases all things feminine to a slur. Not Ok.

Another of those supposedly ‘woke’ men that I would have put my money on. Just a day ago, he made a transphobic remark on a News18 debate in which he said that AAP President and Delhi CM Arvind Kejriwal wanted all the power without any responsibility, like ‘eunuchs’. Later he clarified that he had quoted a British politician who had used the word ‘harlot’.

No matter which word he prefers, it is not Ok. Neither the transphobia, nor the slut shaming of sex workers.

Where are all the real ‘woke’ men?

Both these incidents were soundly thrashed by feminists, who are in no mood to take any nonsense from anyone. While twitter exploded into protests, at least two feminists I personally know have written powerful words that condemn this mindset that needs to be uprooted from its deep roots.

Tarannum Nazma Shaikh wrote about the diversity of women who wear bangles every day, and are no less for it, creating, nurturing, and supporting their lives and of those around them. The fact that her post has received 3K likes and was shared 1.7K times shows how much women identified with it.

She says, “My femininity isn’t for you to define, use, or defame other men into becoming more manly. Please don’t become so woke that you still have the guts to stand alongside women and make it look like chudiyan hamein kamzor Karti hai (as if bangles make us weaker). We’ll swallow you all whole.”

“Have you ever known bangles that sat still? Didn’t sing? That didn’t play a drumroll of a future, of hope, of promises to be fulfilled,
As the hands that wear them serve and scold, heft and stir, wash and polish, sweep and swab, sew and renew, unbutton and nurse, bear and raise.
Do not insult these hands that wear bangles.
Upon them you are held.”

JAGORI Founder Kamla Bhasin who works with Sangat – A Feminist Network, and the South Asia Coordinator of One Billion Rising, a global campaign to end violence against women and girls, has famously said that feminism is not a function of gender, and that women can be patriarchal too, just as men can be feminist. 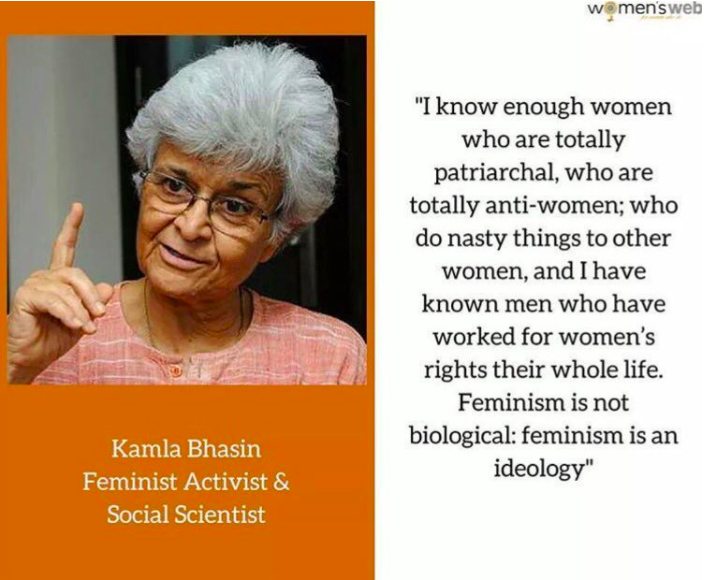 I want to know, where are these feminist men? I don’t seem to find them anywhere. Every time I get my hopes up, the man opens his mouth to reveal  casual sexism or downright misogyny that had been hidden until then.

In the meantime, calling out all supposedly ‘woke’ men who reveal themselves as misogynists: we deserve better!

If Media Introduced These Famous Men The Way Powerful Women Often Are? LOL