I’ve Been On A 366 Day Streak Of Learning Spanish After A Resolution Last Jan – What About You?

With a Spanish speaking house-help where she stays, this busy working mom made a resolution last January to learn Spanish starting from scratch. She takes us along on this journey.

Last January, around this time, I made myself a tiny resolution:  “For 365 days, I will work on a new skill and excel at it.”

The next step was finding a skill I did want to learn. Sewing/Knitting? No, not my cup of tea. Swimming? I already knew how to swim, plus hello? I loved my red hair and was not about to dunk it in chlorine every day.

None of these appealed to me in the least. I was pretty sure I would not morph into a magical designer even if I did it for years.

My housekeeper Lupita interrupted my reverie with a question in her native tongue – Spanish. After much gesturing and miming and looking like an absolute fool, I whipped out my phone and used Google Translate.

And that’s when it hit me!

Truth 1: I loved words. Words that made poems and stories.

Truth 2: I sucked at Spanish. Shameful, considering I lived in a place where 30% of the population spoke Spanish as their primary language.

Truth 3: I needed to learn a new skill.

Truths 1 + 2 + 3 = I would learn a little Spanish every day for 365 days. Hopefully, I would be good enough to at least hold a basic conversation with my housekeeper Lupita.

I shopped around on Google and read various online posts about how best to learn a new language. After much research, I settled on a popular online language learning app. It’s a free app (with in-app purchases and subscriptions) which takes you and completely immerses you in the language you’re trying to learn. I vowed to do at least 30 minutes a day.

The first week went swimmingly well! I learned basic nouns and pronouns and 2 verbs. I kept trying to talk to Lupita, but how many interesting sentences can you come up with “Man”, “apple”, “he”. She laughed at me and I laughed along, feeling ridiculous the whole time.

After the first month, it got harder. Much harder. I was learning more verbs now, but for the life of me, couldn’t conjugate or remember them properly. I once told Lupita, “My husband sleeps where,” and she giggled so hard, she missed work for 3 days.

The next few months were even worse. Kids had school breaks/sicknesses, work was crazy, I had writing deadlines. I longed to skip a day of learning Spanish.

“You’re so tired, Pavi,” I murmured, as I downed another spoon of ice cream. “Between work, children and writing, you’ve got no extra time.It’s ok to miss a day of Spanish. I mean, one day is just one day. You can always resume tomorrow.”

I nodded to myself and closed the app on my phone. It wasn’t like I could just learn and master a new language, well into my …ahem..thirties! Skipping a day wouldn’t matter, in the long run.

I did NOT skip. Later that night, feeling noble and saintly, I did my daily lesson. I learned the Spanish verbs for study (estudiar), love (encantar) and chuckled at the irony of it. The app chirped at me:

I made it to a 100. Then 150. Then 200. I took every chance to speak the language. Lupita was my sparring partner. I conversed with her in broken Spanish and she replied in broken English. And I noticed we weren’t relying much on hand gestures, anymore. The contractor came to fix some pipes, and I thanked him profusely in very formal and broken Spanish. Every patient with an ethnic sounding last name – I spoke Spanish to them. Most of them were encouraging and patient.

One patient tolerated me for 2 minutes before responding, “Sorry, Dr. Raman, I don’t know Spanish. Do you speak any English?”

When I hit 250 days, I purchased the paid version of the app. I spoke with Spanish tutors and learned how to write short, simple stories. I learned how to flirt in Spanish (husband was appreciative but clueless), and a few swear words too (this somehow pleased him more).

A few days ago, I finished my daily lesson after dropping the kids off at school. The app blinked for a second and announced, “You’re on a 366 day streak!”

I smiled, put down my phone and went to the kitchen. And conversed with my housekeeper, in a language we both were fluent in.

30 minutes a day. One day at a time. Learn a new language. Or any new skill. Try new things and you’ll surprise yourself with how good you get.

Step out of your box and get uncomfortable. It’s the only way to grow.

Honestly, it’s the only way to live.

Image source: a still from Netflix series One Day At A Time 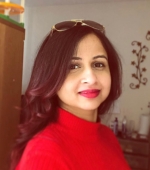 Do You Love Yourself? Go Learn Something New

I Started Working Full Time After 37, And Am Struggling But Still Learning