What do we know of Radha, her emotions, her thoughts, her convictions as a woman? Tripti Sharan’s Being Radha addresses some of these questions.

Being Radha by Tripti Sharan is one of the latest books in the mythological fiction genre. The author takes us through Radha’s journey entirely through a collection of poems.

Radha comes across as a woman of resilience even when she faces loss in childhood, strengths that she will draw on in adulthood. Her falling in love with Krishna in Gokul is a tender story of love and longing. The romance between them comes alive in the paragraphs of poetry; the line between their actuality and her fantasy sometimes getting blurred, leaving space for the reader to draw their own interpretation of the relationship.

Having to move to Vrindavan is not easy for Radha, as she mourns the passing of her simple childhood and deals with the separation from her soul mate.

Krishna’s arrival in Vrindavan and Radha’s joy as she feels complete once again is vividly portrayed, as the lovers reunite and lose themselves in each other. In this idyllic world also Radha maintains a grip on reality. She reminds Krishna of his greater calling and motivates him to be the best possible version of himself; even if it means sacrificing the relationship she has invested all of herself in. 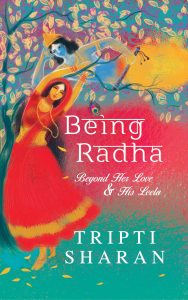 It is after the defeat of Kansa, that the narrative falters, but just a bit.  Radha’s attempts to convince herself and the reader of her complete reconciliation are not a complete success, but the story picks up as she realizes she still yearns for Krishna. Her heartache is palpable as struggles with her own self come to the front; where she questions what she has gained and what she has lost, in always being remembered with Krishna but never being his. This poignancy resonates with the reader once more. She tries to overcome her doubts, jealousy and later sadness when she sees Krishna live a life she can never be part of.

It is well known to the readers that Radha surrendered and devoted herself to her love for Krishna. Tripti Sharan rises above the cliché and weaves a portrayal of a woman of conviction, confident in her choices and capable of defying convention. She worships Krishna but is not blind to his faults and does not hesitate in pointing them out. The relationship comes across as being based on mutual respect, and space for each other’s thoughts. Krishna giving up music which was a cherished bond between them reminds us that their relationship, though ill fated, was not an unequal one.

All in all, an engaging read about a multifaceted protagonist and the sweet sadness of unrequited love. Especially if you are a poetry and mythology lover who believes in women owning their feelings.

If you would like to pick up a copy of Being Radha by Tripti Sharan, use our affiliate links at Amazon India, and at Amazon US.

Shalini grows through her roles as mother and a doctor. She believes that both the