A young woman’s exploration of the depth of feelings, knowing her self, and an emotional story of ‘coming out’ as queer to her mother; a beautiful personal journey.

I am sitting at a beauteous homestay in Coorg as I type this piece. Mom, my eternal travel companion, is sitting on a long wooden bench and looking out to the green goodness that surrounds us.

We have come a long way. She is dressed casually in a maxi, that trusted garment of so many Indian housewives, and has a thick shawl thrown on her person almost absent-mindedly. She isn’t milling about the kitchen fixing multiple breakfasts for the finicky, inconsiderate people of her household. She is, instead, and I mean this, chilling. With a coffee cup in hand and a steady heartbeat unfettered by anxiety inside her, she is actually chilling.

I had come out to her in a dramatically different set-up. It had been a hot, stuffy room in Mom’s house in Gujarat. We had both been weary from some recent family battles and were just taking it one day at a time to recover our sanity. We had been surrounded by upholstered reminders of the house neither of us had found happiness in.

There we were, taking furtive steps towards normalcy, as we understood it. And I decided, let me just open up a part of my life that I hadn’t articulated in front of her so far.

You see, I view ‘coming out’ as a weird concept. It has the tinge of a ceremony to it, like it is a one-moment thing. But coming to grips with one’s sexual orientation and preferences is rarely ever a one-moment thing. It takes years of personal churning to realise that about yourself. It takes years of noticing one’s own feelings when one interacts with people of all genders. It takes many days to notice one’s eyes settling on different persons, and what details one remembers after that moment has passed.

Did his smile make me blush?

Did her mere presence calm my nerves?

Did they just enter the room and make me happy?

Did a person’s touch just make me feel at home?

What was that person’s gender? Did I care to know? Did it matter?

Coming out? More of Out-Growing!

It takes many, many such moments to realise that, ah OK, I am anything but thinking ‘straight’! I have come to realise that my journey has been less a straight line and more like a drop of ink on water – branching in all directions, its depths differing and still forming.

So, ‘coming out’ doesn’t really apply to me, I feel. It has been more like ‘out-growing’. Outgrowing my limited understanding of romance. Outgrowing my binary approach to gender. Outgrowing my thinking that sex is only physical, and that ‘love’ has one filmy definition. Outgrowing that only one person should be saddled with all your expectations.

That afternoon, when I was speaking with my mother, I was just fortifying all my outgrowing into a few sentences. I was establishing an identity, but also staking a claim to be fluid.

“Mom, I need to tell you, that my future partner may not be a man.”

She stared at me. Over a decade ago, she had told me about “something that happens to women every month” when I had questioned her about the diminishing packet of cotton pads in our cupboard. She had dropped nuggets about periods in the following months, so when I had first bled, I came out declaring “It started for me!!”. That appointed afternoon many years later, I felt a role reversal happening. In the preceding months, I had had many conversations about same-sex relationships with her. I had spoken about a few gay friends. I had discussed news items on LGBTQIA+ issues. She had read a book with a gay relationship storyline in it. She was kinda, sorta prepared without even knowing!

Do you understand me, Mom?

“Do you understand what I am saying? I am bisexual. Bi means two.”

She looked into the distance and said, “OK, I guess I do not fully understand it, but I am OK with it. I want you to be happy and I want to give all your partners a good chance.”

I paused for a bit to make sure I had made myself clear. “But, you know, it will take me time, I am not used to this. Maybe I should read more about it.” she added. I was fine with that! I was more than fine. I was relieved and I was proud that this conversation didn’t have to be contentious.

How do I ‘define’ myself?

I realised in time that ‘bisexual’ did not fully define me. As my lexicon of gender identities expanded, I started tagging myself ‘pansexual’. But then, as my political ideas took shape and I explored my lifestyle as a single woman with no trust in the institution of marriage or forced motherhood, I veered towards being ‘queer’. The word – for long used as a slur to diminish those who rejected binaries and heteronormativity – resonated with me more than what ‘bisexual’ did. It was a more wholesome word, capturing not just my sexuality but my politics, my understanding of ‘gender’ and ‘sex’, my approach to human relationships, and my ideas of womanhood. I was queer. I am queer. 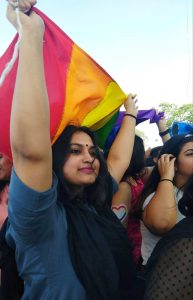 Being queer also helped me overcome the strictures of masculinities I saw around me. I had been terrified, before my queer awakening, that I had to kowtow to a heteronormative story that expected me to view my womanhood as a weakness, and demanded my silence and subjugation. I could reject that now, because I saw better, and I saw more. Love or partnership needn’t mean one-upmanship, masculinity needn’t mean toxicity. Queer-dom opened up my mind and made me confident. I continue to explore my queer feminist identity and am comfortable in the knowledge of its fluidity.

Five years after ‘coming out’, I am typing this and I can hear Mom recall a recent event held in Bengaluru – the Samabhav – Travelling International Film Festival is a project by Mumbai-based Men Against Violence and Abuse (MAVA) that aims to raise gender awareness among young people through the showcase of alternate cinema. Mom had been a witness to films about the struggle of single women to find decent housing (‘Bachelor Girls’ by Shikha Makan), a mother surprising her daughters with her progressive ideas on live-in relationships (‘Ruchibhedam’ by Theertha Menon), and more. She had been moved and she had become more curious than ever.

Mom looks at me now for confirmation as she revises the full form of the spectrum – “Lesbian, Gay, Bisexual, Transgender, Queer, Intersex, Asexual, and plus means more, alle mole?” I nod. “Yes, that’s right, Mom.”