Niyati Tamaskar writes about how she was 'Unafraid' despite breast cancer that struck her at a very vulnerable time - as a new mom with a breast-feesing infant.

Niyati Tamaskar writes about how she was ‘Unafraid’ despite breast cancer that struck her at a very vulnerable time – as a new mom with a breast-feesing infant.

Little did I know that when I picked up Unafraid by Niyati Tamaskar to read, that it would leave such an indelible impression on me. It is by far, the best read of 2019 for me, and in no way am I exaggerating.

On March 2, 2018, Niyati Tamaskar, a thirty-four-year-old breastfeeding mother with two children under four, a doting husband, and a fulfilling engineering job, was diagnosed with breast cancer.

She has written her memoir of the struggle Unafraid to share her story as a cancer survivor, as well as to break the taboo and stigma associated with breasts and cancer in Indian society.

If you ask me honestly, I’d say that everything in this book works.

Mainly because such stories need to be told often, but also because, Niyati writes this book from her heart. Raw. Unfiltered. Beautiful.

The book felt less like a book and more like a hearty conversation with a loved one. A warm friend who welcomes you into her home and heart. An inspiring woman who shares the deepest, and darkest episodes of her life with such brutal honesty that it’s unbelievable.

I know of two similar cancer cases in my family.

In the first case, they involved the entire family and kept us updated on all the treatment procedures. As a family, we prayed hard for the successful treatment of our loved one, and we pitched in to help as much as we could. Needless to add, our relative survived cancer and is hale and hearty today. In the second case, everyone, including us, were kept entirely in the dark by the immediate family, out of fear and shame of public ridicule and judgment. We learned about the condition when it was too late. Too late for any one of us to help and save a dear one.

“If it takes a village to raise a child, it takes a bloody army to battle cancer.”

Niyati confided in her family the minute she was diagnosed with cancer. Despite the denial and shock, she allowed people in her life at a time when she needed them the most – family, friends, strangers, doctors, nurses, lab technicians, all and sundry nice.

Niyati catches the bull by its horns in the chapter ‘Victim Blaming’ when she discusses the enormous stigma and shame attached to cancer in India. Add to that breast cancer, and we have a double whammy of taboos. She ascribes the victim-blaming and shaming to not just cancer, but also other aspects in our society.

“Breasts and cancer pose two challenges in Indian society. First, there is the indignity associated with saying the word ‘breast’ out loud. Women’s reproductive parts are taboo; girls are made to feel embarrassed, and told that saying ‘breast’ is akin to exposing them.”

“Well, I shared the news with everyone I knew, because I have watched women in my family endure cancer in cloak-and-dagger fashion. Indian culture impressed upon them that cancer is a forbidden word, and it is dishonorable to say breast.”

Coping with people, and the aftermath of surgery

She doesn’t mince her words when it comes to sharing about the heartless things people can say to a cancer patient. ‘The Shit People Say When They Hear You Have Cancer’, in her words.

What hit me the most about Niyati’s narrative was how she wears her vulnerability like a true badge of honor and strength.

“Vulnerability meant walking around with no cloak. But it also meant allowing others in, others without whom I couldn’t beat cancer. Vulnerability is not a sign of weakness like I used to think. In actuality, only the brave dare to be vulnerable.”

“It baffled me. To wake up without breasts, how does one cope from that? I thought about it long and hard and came up with this reasoning: Chemotherapy is in your face. It is the bald patient throwing up and sleeping for hours. It is hard to ignore, and you cannot look away. Surgery is under my shirt. It is silent and not in anyone’s face.”

“He assured me it wouldn’t trigger any airport metal detectors, and since it wasn’t a ferrous material, it was completely safe. I thought to myself, boobs of titanium – I’m practically Iron Woman. I have superpowers.”

As you read the book, you will be amazed at Niyati’s attitude like I was. Even at an advanced stage of breast cancer, she fought it bravely till the end. All this while still reporting to work and taking care of her family. I found that highly inspiring as it gave me no excuse for complaining about my life and its relatively much simpler problems. If Niyati could go to work and go about her business while having cancer, so can I. That’s the kind of strength and inspiration that she passes onto to us, her readers.

“I didn’t want the cancer diagnosis to terminate my career – I wanted to prove to myself that I could handle this, and I would do so by working. It was my way of saying Screw You to cancer.”

As you wonder from where Niyati derives her strength, she lets you closer to share another dark episode in her life in the chapter ‘Fire in My Soul’. This is my personal favorite in this book because it blows the lid off our society. Niyati shares about the death of her father, and life post that.

“Women in India are treated like second-class citizens. Widows are a class below that. They are stigmatized and considered to be a bad omen. The social hierarchy goes like this: man, male child, female child, mother, several layers of other relations, then widow. My mother, an educated, successful, talented, beautiful woman, was now a widow. And on top of that great tragedy, she had no sons.” 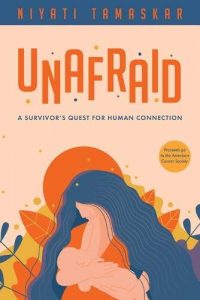 Niyati recounts several harrowing incidents in her childhood post her father’s death, where her family was socially ostracized. On happy occasions such as marriage, birthdays, and festive occasions such as Diwali, and Holi. Yet, when it came to a personal emergency such as the illness of the grandchild whose birthday they were uninvited to owing to beliefs of ‘ill-omen’, the family called her mother who was a legit doctor at an unearthly hour for medical treatment.

“This experience defined my sister and me. It defined my mother. What kind of a society alienates a woman and her two daughters when they have been struck with such a tragedy? My mother told us it was important to be strong, never show weakness, or wallow in self-pity. The world can be a wretched place, but she taught us to be unafraid.”

Unafraid is not just a book; it’s a blessing for women out there, and especially to cancer survivors. And we need more such stories.

Concluding my review of Unafraid with one of my favorite quotes, and bookmarking this one as it’s one of the best lines that I’ve read on aging.

“All of us know that we are on this planet for a finite amount of time, yet we fool ourselves into believing that we will never grow old. Newsflash! Old age is a privilege.”

If you would like to pick up a copy of Unafraid by Niyati Tamaskar, use our affiliate links at Amazon India, and at Amazon US.