That Woman Who Set the Ball Rolling

When God created genders, seldom did he know that human beings would make this the very foundation of various theories, ideologies and doctrines. The stronger sex, i.e., males, would exert its authority on the fairer sex, i.e., females, and would even produce biological evidence to assert that it is naturally superior. The women would rather reluctantly give in to the say of the men, for she would sadly be left with fewer choices to opt from. This burden of influence would keep weighing on them, depreciating their value in their own eyes. She would stop holding herself in high regards; forget about treating herself at par with the men in her life. Her life would, thus, confine to the four walls of the house and the chores concerned with it.

In the times that there were, it never even occurred to women that they could cross the boundaries of the house and think beyond the kitchen; that they could step out to earn and become financially independent. They had, on the contrary, become downright submissive and docile with years of subordination. Then set in the era of these trendsetters who thought they were different and capable enough to balance the house and their jobs. They not only banked on their knowledge and expertise in doing things but also bravely championed the thought of commercializing it. This first working woman in the house really set the ball rolling for generations of financially independent women in her family.

These women, like proudly my mother, set out to give a meaning to their lives, to the education they had attained and to the fact that there was a market which would pay them for their skills. However, this did not necessarily mean they got to wash their hands off the conventional roles they had to playback home because they shouldered the responsibility of running the house with the man. The protagonist of the story would still be ‘him’ and she would have to hesitantly ride pillion. Nevertheless, it was never about an apparent show of masterful achievements for them; it was rather about the effortlessness of being; about cultivated poise. These women who showed the courage to step out of their homes have, first, set that place right and, second, ironed out the kinks in their family members’ lives literally had their nerves made of steel.

They instilled in all the women around them, be it their daughters, sisters or friends, a perception that there was no work ‘undoable’ by the females. Despite being a ‘biologically inferior’ sex, they did not have to play second fiddle to the males in any field, whatsoever. That confidence is what has driven us, and millions of others, thus far to where we stand today. When I look back today to where it all started, the desire to be economically empowered all came from my mother, the first in her family to get to work and make a mark! 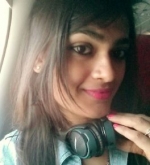 Cheena Chopra is a digital publishing professional since a decade and loves working with, on