Transgender persons have existed for as long as humanity but there has been no law identifying them till now. That is about to change with the passing of The Transgender Persons Bill in Lok Sabha. This may sound like a welcome move; however, the Transgender community is not happy about it. Let’s explore the reasons behind it.

The push for passing a law concerning the Transgender persons came from the Supreme Court’s judgment in the NALSA (National Legal Services Authority) vs Union of India wherein the apex court declared transgender people to be a ‘third gender’.

It was also affirmed that the fundamental rights granted under the Constitution of India will be equally applicable to transgender people. And it further gave them the right to self-identification of their gender as male, female or the third-gender. The court also directed governments to provide reservations and healthcare services.

So, when the Ministry of Social Justice and Empowerment decided to draft a bill for the Transgender Persons, it was believed that it would be based on the NALSA judgment in its spirit and body. However, the bill passed in Lok Sabha, while good in some aspects, treats Transgender persons as unequal. Here are the reasons for saying so-

While the original draft bill had an obnoxious definition of Transgender persons, the current bill is a slight improvement. It still doesn’t allow a Transgender person to identify themselves as Male or Female unless they have undergone surgical procedures.

This goes against the NALSA judgment that states that insistence on surgical intervention for identification with gender is immoral and illegal.

The bill is very shallow on several counts. It doesn’t make any binding commitments on educational or employment-based empowerment of Transgenders. There is no provision of reservation in education or jobs as directed by the Supreme Court. The Transgender Persons were to be included in the existing OBC quota for the same.

No safeguards against harassment

The bill treats Transgender persons as unequal by proposing lesser quantum of punishment (ranging from six months to two years) for those sexually abusing a transgender person as against those abusing a woman.

An online campaign is running on Facebook under the tagline ‘Rape is Rape.’ The campaign aims to draw attention towards the miscarriage of justice.

It needs to be noted that in the recently passed Triple Talaq Bill, a man will be jailed for three says for the triple talaq even it it is null and void. However, raping a Transgender person would get a maximum of two years of punishment.

Doesn’t make sense, does it?

The bill considers Transgenders as asexual beings with no aspirations for marriage, surrogacy or adoption. It provides for none of these rights. The recently passed Surrogacy Bill effectively ensures that Transgender persons who are single or un-operated cannot avail it.

The bill doesn’t take into account that some Transgender persons are members of the Hijra/Kinnar community with its age-old tradition of Guru-Chela.

This is parallel to the familial system and is a relief for the Transgender persons who have been thrown out of their families of birth. There is no provision of inheritance or legal recognition as parent/guardian for those part of the Hijra families under the proposed bill.

No distinction with Intersex persons

The bill joins Transgender persons and Intersex persons together. This means that those who drafted the bill have no clear idea regarding the difference between biological sex and gender.

While a few intersex persons may be Transgender, most are not. Also, this doesn’t take into consideration that legally no surgical intervention is allowed in intersex persons prior to the age of 18 years.

On the other hand, the needs of Transgender persons below the age of 18 years may include prescription of puberty blockers to relieve gender dysphoria and help in better transition and passing.

It is still better than the earlier Bills

Having said this, the bill in its current form is still better than its previous version which was passed in NDA’s preceding term. Two specific provisions of the bill have been done away with much to the relief of the community.

Firstly, the current bill has done away with the much-criticised, gate-keeping, screening committee. This was given the task of certifying who gets qualified to be called a Transgender person.

Now its self-identification, with a corollary. The task of screening committee is now shifted to the office of the District Magistrate – not much of a benefit.

Secondly, the traditional practice of the Hijra community, of ‘Badhai’, was criminalised under the previous version of the bill under the pretext of begging. The same has also been done away with, thankfully.

A welcome step, that still left out a lot

While the bill, is a welcome step, it still leaves a lot. The seriousness of the government regarding the Bill will be tested in the near future. This will be as we get to see how effectively they work on the bill’s provisions of education, healthcare, and other welfare measures.

The NALSA judgement directed central and state governments to provide welfare measures for the Transgender community. Some states had sprung into action and set up Transgender welfare boards. They also provided certain services like separate identity cards, financial aid for sex reassignment surgery and hostel facilities.

However, it has been mostly sporadic and highly inadequate for a community whose population runs into millions. So, even if the TG bill were to become a reality soon, how much will change on the ground needs to be seen.

The similarities between the two Bills

The Transgender Persons Bill was passed in the Lok Sabha on 5th August 2019. It was the same day when Mr. Amit Shah was getting the Jammu and Kashmir Bills passed in Rajya Sabha. These were passed for the abrogation of Article 370 and bifurcation of State into two union territories.

The two bills have something in common. In both the situations, the people who are said to be the beneficiaries of the bill were either not taken into confidence or their views were not heard.

The Transgender community had made several representations and proposed more than a hundred amendments in the bill, most of which were rejected. No doubt, the social justice minister placing the bill in the lower house, called Transgender persons “abhinn ang” (inseparable part) of the society, just like the government has been repeating that Kashmir is an “integral part” of India.

Now, does the government care to listen to these inseparable sections of society or does what it deems fit for them, is something we all need to infer for ourselves. 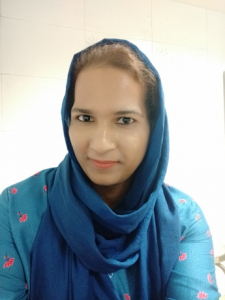 Author details: Dr. Aqsa Shaikh is a Medical Educator based in Delhi. She is a Community Medicine Specialist teaching at Jamia Hamdard University, Delhi. Aqsa, a transwoman herself, writes extensively on the challenges faced by the transgender community in India through her blogs in the Times of India and Youth Ki Awaaz. Besides this, she is also passionate about raising awareness of the mental health issues amongst vulnerable groups like students and the LGBTQIA+ community. She is also a poet and writes in English, Hindi, and Urdu.

Picture credits: Screenshot from Joyita Mandal’s Ted Talk. Mandal is India’s first transwoman to be appointed as a judge of the Lok Adalat in West Bengal.