To Women Who Break The Glass Ceiling: Pave The Way For Others After You

Do women who get past the glass ceiling pave the way for other women after them? Or do they simply internalise the existing patriarchal structures?

Do women who get past the glass ceiling pave the way for other women after them? Or do they simply internalise the existing patriarchal structures?

The often used phrase, ‘a glass ceiling‘ represents a barrier that prohibits women from advancing toward the top of a hierarchical corporation. Women facing the glass ceiling are prevented from receiving promotion, especially to the executive rankings, within their corporation.

In other words, it also means that women are often relegated to the ‘sticky floor’ (read entry and/or stretched to mid level positions) or ‘the frozen middle’, more commonly ascribed to the aforementioned slowing of women’s careers in middle management.

In such professional spaces, women are often advised to navigate through the many obstacles posited to them. While most are wedged in the mid level, a few ‘manage’ to climb the ladder and make it through the thin membrane of a ceiling.

These ‘Invisible Barriers’ function as metaphors to describe the extra circumstances that women undergo, usually when trying to carve a niche in their careers and often while trying to do the same in their personal lives outside their workspaces. It is a significant and weighty concept, as women who actualize this, often survive a number of obstacles and that in turn serves as an exemplary example for many others to follow suit.

Why don’t most women make it up past the glass ceiling?

Is breaking the glass ceiling enough?

What after that? What happens to those women who shatter that ceiling? More often than not, many such women internalize the power dichotomy that they have struggled against and practice the very same oppressive means on their female subordinates.

It’s almost analogous to those cases when women who undergo a journey of fat loss and after achieving the ‘ideal skinny body’ in turn fat shame those who are not within a size bracket. Another similar trajectory is that of that ‘bahu’ who when she becomes the ‘saas’ practices the same subjugation that was meted out to her when at a less advantaged position. So what do we draw from these threads then? The crux that holds it all together is the element of ‘power’; the changing dynamics of turning the oppressed to an oppressor depending on the side that power swings favourably.

Why does it hold significance?

It holds larger significance and is becoming all the more relevant because there is large female presence in the public sphere including the workplace but at the same time, less female participation – the number of women CEOs is under 30, and the percentage of women politicians is at a staggering of 12-14%.

The movement to drive progress on gender parity has more momentum than ever before. Therefore, ideally the goal of women who actually break the glass ceiling should be to build a diverse, gender-neutral and inclusive environment.

Do women really break the glass ceiling or just crack it?

Is Breaking that Ceiling enough? A note to the women who have shattered the glass ceiling.

Glass ceilings shatter with important consequences, but those consequences may take a generation to become fully realized. Evidently, there is a positive influence that women in power have on other women’s engagement and competitiveness and disproportionately affects younger women—women who will begin at lower-levels before possibly rising to managerial ranks and towards more prestigious positions.

It is therefore unsurprising that shattered glass ceilings have a much greater effect on lower-profile women aspirants. The women who have broken the glass ceilings today will form a large pool of viable female candidates for a country’s most important leadership positions in the years to come.

However, it is not always a positive indication that women who break the glass ceilings provide easy passage to women employees or aspirants. This is akin to the Indian familial setup of a daughter-in-law on becoming the mother-in-law exercises the same coercive means and measures on her daughter-in-law that she once faced. In short, do women really break the glass ceilings or merely crack it? How much do women internalize power dichotomies that they in turn set the same stringent rules only to act as agents of patriarchy in the garb of being a messiah for the many girls and women to fall into the same trap.

One needs to rethink the objective when dismantling symbols of patriarchy and revisit these mindscapes so that other aspirational women do not face the same hurdles that these women challenged. A note to all those who have shattered the glass ceiling is not build another glass ceiling with iron pillars for the others who might aspire to tow the similar paths.

Also, once one has made it there, the real challenge then begins to becoming a leader by locating the labyrinths of power and unequal treatment of women and preventing the reinforcement of patriarchal socio-cultural systems of inequality and domination that maintain visible and invisible mechanisms of power, privilege and influence in symbolic, figurative, and metaphoric cultural forms, rendering them the norm.

Background to the concept of gender at workplace central to women

Gender diversity is a deep economic issue, and it is everyone’s issue. It is a documented fact that countries with higher amounts of participation in the workforce of women have stronger and more robust economies.

Economic growth depends on the growth and skills of the labour force, the movement of people from low to high productivity activities, and the investment in education and skills of future generations, all of which is facilitated when our women join the workforce.

In a study on women’s participation in corporate boards, the IMF found that adding just one woman to a board incrementally, without further changes to gender diversity may add 8-13 bps to the bottom line of companies.

And there are tremendous examples of societies that have embraced this globally—Israel, Norway and much of the Scandinavian block—and are counted among some of the most progressive and prosperous countries in the world.

When my grandmother embraced financial independence, she ensured that two generations of women, and hopefully many more after her, did so, and this is true at large.

When a women becomes financially independent, the impact on society is far-reaching and not just immediate. Financial independence gives women decision making power, and remember, women influence a large part of the buying decisions (80 percent in the US) not just for themselves, but for their families.

What does it mean to have women in managerial and executive positions?
Like the Scandinavian countries, having more women simply means leveraging on tapping all resources adequately; hence, having a wholesome output contributing to the best of the nation.

Women as agents of patriarchy

Largely invisible in most spheres dominated by men, centred around either economic or political liberty, women sometimes form a contentious seat of holding staunch traditional patriarchal values in a rapidly development oriented society.

While the visibility of women is recognized in small numbers, women in positions of power are often depicted as non-individualistic who are psychologically and institutionally dominated traditional patriarchal values – especially that of ‘power’. Even though a large section of women are subjugated and deprived of the basics of being treated as an equal, the women who hold power, internalize the power dynamics of the systemic operatives exacting them in the same ways meted to them, when they were in the ‘vulnerable’ as opposed to ‘powerful’.

While it is an understated presumption that women leaders will pave the way for the others to grow and flourish, and they probably do from a distance as a role model, very few studies have been conducted to test the hypothesis whether women who break the glass ceiling reify the notion of women relieve their yokes or act as double agents of patriarchy. As my premise is based on the latter, and if one were to consider that to be a supposition worth considering, I’d say that women have not really broken the glass ceiling but only made a crack on it.

In concluding lines, as we celebrate an Indira Nooyi, Kiran Mazumdar Shaw, or Sairee Chahal and a Radhika Ghai, it is essential for a more positive narrative to encourage increasing women presence at the decision making level.

Considering all the odds, there is also a critical requirement to introspect and assess the many gaps (nature and factors contributing to it) that make these invisible barriers to exist. Furthermore, it’ll also be interesting to check for results of studies that can be undertaken to the analyse the findings for positive role-modeling of female led ventures towards diminishing ‘sticky floors’ and the ‘frozen middle’. 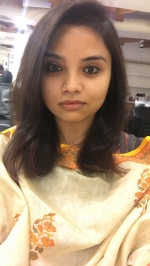 Master’s graduate, London School of Economics and Political Science. Esha has worked in the interiors of India and Nepal on gender issues and is also an author with SheThePeople. read more...