Neha hesitated to answer. It had been almost five years of being on a break now. She had tried to work it out after Myra’s each significant milestone and had failed every time.

Neha hesitated to answer. It had been almost five years of being on a break now. She had tried to work it out after Myra’s each significant milestone and had failed every time.

“Jaane kya dhoondta hai ae mere dil, tujko kya chahiye Zindagi….” Neha increased the volume of the JBL Bluetooth speaker as it played Lucky Ali’s famous song. There was a flavour of nostalgia to this music. His tunes reminded her of the beautiful days when she had just started her career more than a decade back. Every time the music played and the lyrics rolled in; the memories came tumbling out from the closets of yesteryears.

Almost every evening after 7 pm as soon as the cubicles of managers went vacant, the basement of the software company in Gurgaon bustled with life. The young software engineers just out of their colleges increased the volume of their desktops and coded thousands of lines into software programs along with humming songs. Beatles, Rolling stone, Lucky Ali and a lot more… They were a batch of more than a dozen engineers who had made it to the #1 software company on the day zero of placements.

Neha reminisced about those times with a delicate warmth and comfort as some of the friendships had graduated to life long bonds. Pooja-Prakhar, Deepanita-Harman. And that’s how she had also met Varun. It didn’t take them much time to commit for a lifetime. Neha couldn’t resist but smile.

Just then, the doorbell rang. Neha paused the music and went to check on the door.

Her maid was sick and wasn’t turning up today. As Neha locked the door, she looked around. The leftovers from last night’s get together with Varun’s team reminded her of the life this place was full of just a few hours back. The dirty dishes in the kitchen were a testimony that guests had relished the food. The books sprawled all over the study brought back the intense conversations that her bibliophile guests had indulged in with the cup of coffee.

How lovely is it to be a part of a team and a healthy work culture! She missed her corporate days. She had always been fortunate to get the best of mentors and team. And so was Varun. She smiled. But the thoughts of a circuitous day ahead dampened her thoughts; It would be a long day, she sighed. And she better hurry up since Myra would have to be picked up from her school soon. And then there was ballet and arts.

How the daily chores and managing the four-year old defined her days! Varun did help, but his new job had a lot of travel and demanded extended late-night shifts. Whenever Neha spoke about her desire to do something more than the portfolio of home and their kid, Varun reminded her of their collective decision to ensure quality parenting for their child. And that when he was bringing money, she could relax from the hectic schedules and stringent deadlines which was a norm for the software industry.

She did desist many times, but then the discussion which usually took a sour note ended with Varun putting the responsibility on her to ensure a support system before she ventured out. As Neha struggled with this internal consternation with herself the nth time, her phone beeped. It was a WhatsApp message.

“Hey Neha, I am travelling to India on a business trip and would be in your city coming Wednesday.”

“Will you be able to meet me? I am staying at Vivanta in Gurgaon.”

“Is that close by to where you stay?”

Neha smiled. The message was from Meg.

Neha used to report to Meg when she had travelled to Texas for a year-long assignment. Because of her competency and excellent performance, Meg had extended her stay by another year. More than a manager, Meg had been a mentor and a guide to her. Both of them had resolved many code bugs and handled several difficult customer calls together. Meg was a strong woman, a mother to two boys who had made no alternate choices to her career. Her immense trust in Neha’s competency had made Neha grow leaps and bounds in her organisation. How could Neha say no? With a particular urgency as if her late reply may mean missing the opportunity to meet Meg, she typed on WhatsApp

“Yes, of course, Meg, everything works for me.”

“Look forward to seeing you soon:)”

Lovely plans started to brew in Neha’s mind about the evening. What should she wear? What all she would talk about with Meg. Should she gift her something? As she reached out to the wardrobe to scan, a thought struck her. Just this morning, Varun had shared his travel plans for Wednesday. He won’t be home before the weekend. How would she manage Myra and then the playdate which had been fixed a month back?  But then this time, her heart just dismissed any reason that her mind put in the way of meeting Meg. She had to make it work, come what may.

“Good to see you Neha, So how have you been?” Meg hugged Neha. She had an aura of positivity around her. And she ensured that she didn’t drop even an iota of it even in the most difficult of situations.

As the two started to exchange trivia, Meg interrupted.

“Neha, You remember that Huawei Project which you helped me to pitch and then we had handled the calls together?”

“Oh Yes, I do. Mr Ken was the program director from Huawei?” Neha quickly replied.

“Yes, Yes. Ken was asking about you. He so dearly remembers you,” Meg’s eyes sparkled with a sense of achievement. It indeed was a challenging project for which Neha had won the ‘Best employee award’, thanks to the excellent feedback from the customer. Seeing Neha reminisce those days with such fondness, Meg interrupted

“When do you plan to resume back work?”

Neha hesitated to answer. It had been almost five years of being on a break now. She had tried to work it out after Myra’s each significant milestone and had failed every time. Sometimes it was Varun who discouraged her, other times it was ever-increasing responsibilities and travel; and other times Myra had fallen sick. All this had kind of made Neha too weak to think aggressively about going back. And lately, LinkedIn applications had questions on her plans for a second one as well as the long gap she had been away from work.

Meg could sense a moment of weakness in Neha’s eyes.

“Neha, you have to permit yourself to be back. You know that we only come in our way. Your aspirations are your possibilities. Once you decide, rest everything will fall in place.”

Neha quickly tried to brush away the tears, which had almost welled her eyes. She looked at Meg, who was sitting just across the table. Meg reached out and held Neha’s hands.

“Don’t stop yourself from taking the plunge. Think of the obstacles as your allies. You are brave, and a competent girl and I know you want it. Go for it!”

Meg’s words had a certain kind of conviction in them. Extremely simple and so true. They did feel right. What was stopping Neha which she couldn’t manage? She felt reassured and empowered.

I am writing to you to share some good news at my end. You remember our meeting a few months back? Those few hours with you had instilled so much courage in me. I finally managed to put all the pieces of the puzzle in place. It’s been a month, and I am enjoying my new job.

Thank you for being my shining light always. I owe you one:)

Neha clicked on Send and put her headphones on. It was time to review the code that her mentee had just checked in. She had an hour before she would have to pick up Myra from the Daycare facility just next to her office. She smiled as her favourite Lucky Ali song started to play…

Author’s Note – The short story is a tribute to all those women who go the extra mile to support other women employees in their teams. And as they do, they become exceptional role models for their juniors to respect and emulate, thus creating life long bonds.

Register at Women's Web to get our weekly mailer and never miss out on our events, contests & best reads - you can also start sharing your own ideas and experiences with thousands of other women here!
sisterhoodworking mother 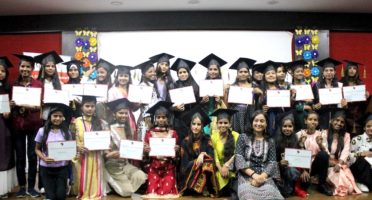