From his privileged position as a man who has no idea of women's lives and bodies, Japan's minister Takumi Nemoto has deemed heels essential for working women. Here's a woman's take on that.

From his privileged position as a man who has no idea of women’s lives and bodies, Japan’s minister Takumi Nemoto has deemed heels essential for working women. Here’s a woman’s take on that.

A recent petition by Japanese women has gathered momentum under the #Ku Too hashtag, an amalgamation of the Japanese words for shoes, kutsu, and pain, kutsū. Imposing a dress code for woman only is tantamount to discrimination and harassment, the petition stated.

Japan’s Health, Labor and Welfare Minister Takumi Nemoto, who oversees Japan’s workplace reforms, responded to this petition by women workers in Japan to ban companies from forcing women to wear high heels at work, as he thought it was perfectly reasonable to expect women to wear heels to work, and refused to support the ban. Nemoto said, “It is socially accepted as something that falls with the realm of being occupationally necessary and appropriate!”

Nemoto is male, presumably never having worn high heels in his life. And Japan ranks 110th out of 149 countries in the World Economic Forum’s gender-equality ranking.

Now that you have digested this, it’s time to flip it around.

In Nemoto’s spirit of being occupationally necessary and socially appropriate, let’s think of the list of bans that must be enforced on Indian men at the workplace, all coming from a woman whose biggest qualification is that she is a woman who knows very little about men.

The last time I was in a meeting sitting next to one such male colleague, I tried not to inhale every time he opened his mouth. This meant I had to laboriously hold on to my tummy tuck position for a full 10 minutes while Uncle Pan Parag passionately extolled the virtues of the new mobile transportation app that we were piloting in the organization. Not to mention being nervous about that drip of red that dangled precariously at the edge of his mouth, keeping a tissue ready in case it fell on the pages of my notebook.

Pan Parag or Pan Bahar, Jalal Agha or Pierce Brosnan, this tobacco chewing act needs to be banned before workplaces run out of tissue paper to keep wiping off the spray paint.

Watering and fertilising beards and moustaches

‘Movember’ lasts for just one month. For the rest of the eleven months, there is Gillette.

Last I checked (and I am proud to say I’m not an expert on men’s shaving products) their Mach 3 Turbo razers is the best a (wo)man can get. I don’t mind including it in the workplace onboarding kit if that’s what it takes to keep them from growing beards and moustaches that get entangled with the ramen while out on a team lunch. Always better to avoid close shaves, huh?

You may be an LGBT ally, but think twice before wearing rainbow socks under your black work trousers. Spare a thought to how “distracting it would be for the women” who are channelizing all their energies fighting mansplaining in a meeting, when your ankle length trouser lifts and there it is, a colourful display of coconut trees on a blue beach with a glass of martini on the side. Suddenly all one can think of is the date you can activate your email out of office and tell everyone to breathe down on your colleague and squeeze the pulp out of her when you are holidaying in Hawaii.

Men, if you really care about workforce productivity, the onus is on you to un-happy your socks, or keep those pants long enough.

I get that the climate in India is mostly hot and humid. But even if it’s a blistering 40 degrees, which it never usually is in an air-conditioned workplace, we women do not like the sight of salt and pepper curls growing out of chests like money plants creeping onto the window sill. It makes us extremely insecure about our own thinning scalps, instills in us Rapunzel like fantasies of luscious hair growth, and drives us to hoard castor oil and spinach, leading to ostracism in the family.

All in all, men buttoning up at the workplace is important to preserve the sanity of our social construct.

Shirts that are ready to burst

It’s highly unlikely that you will carry off a tight shirt unless you are a GQ model. Wearing one of them when you don’t have the body for it just means that every time you breathe, one of the buttons pop out. You may think you are coordinated because alternate buttons have held up. You may also think that it’s OK to flaunt your waxed chest in the process.

You’re entitled to your views just like Nemoto is entitled to his. But while you are at it, find the right size anyway. Or find a better tailor.

Meanwhile ladies, hell hath no fury like a woman forced to wear heels. Ditch those Louboutins, and let your Kolhapuris do the talking! 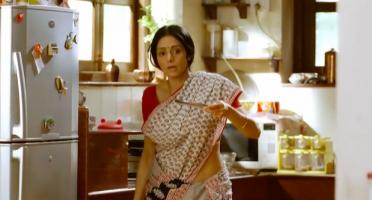 "I Love Housework," Said No Woman Ever! Surely None Of Us Were 'Born' To Do It?