This Image Of A Young Sudanese Woman Gone Viral; How Can Indians Help In Their Human Rights Crisis?

The women in Sudan are becoming the new ray of hope. One image of young Sudanese woman is going viral and asking the world to pay attention to.

The women in Sudan are becoming the new ray of hope. One image of young Sudanese woman is going viral and asking the world to pay attention to.

With gunfire, panic and humanity suffering Sudan is descending into chaos and it’s high time that the world talks about it. Sudanese people first started protesting in December 2018 against the rule of former President Omar Hassan al-Bashir.

Al Bashir had ruled Sudan for 30 years, since 1989. Life under Bashir was awful. During his reign he enacted a strict form of Sharia law, he locked up thousands of political dissidents and carried out the ethnic cleansing of Non-Arabs in Darfur. In his reign, he was charged for war crimes, crimes against humanity and genocide.

On April 11, 2019, after a huge mass protest happening in the country Bashir was forced to step down from his position. Women have been a huge part of this moment and protest against the inhumane rule of Bashir.

When thousands of people took to the streets in the capital of Khartoum demanding that President Omar al-Bashir should step down, local photographer Lana Haroun captured 22-year-old young Sudanese woman (who identified herself as 22-year-old Alaa Salah to Buzzfeed).

She was standing on top of a car above dozens of people protesting. Her arm is raised up in the air, finger pointed toward the sky for freedom.

This powerful picture quickly went viral and Alaa Salah became the new hope of the Sudanese voice. Local photographer Lana Haroun, who took the image told CNN that the woman was an inspiration.

“She was representing all Sudanese women and girls and she inspired every woman and girl at the sit-in. Alaa was telling the story of Sudanese women. … She was perfect.”

A user also pointed out on twitter how Alaa’s clothes also delivered the powerful message of revolution. Hind Makki tweeted that the white garment and gold moon-shaped earrings Salah wore pay homage to working women in cities or in the agricultural sector. According to Makki the entire outfit “is also a callback to the clothing worn by our mothers and grandmothers in the 1960s, 1970s, and 1980s while demonstrating in the street against previous military dictatorships”. 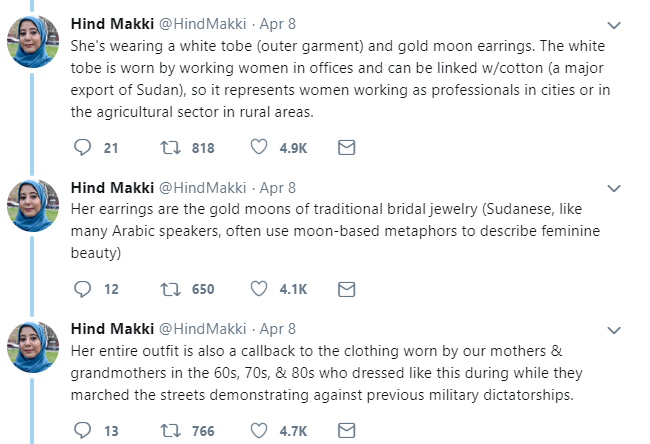 Did the fight end at Bashir’s Resignation?

The dictator Bashir was overthrown on April 11, 2019, since then Sudan is being run by The Transitional Military Council (TMC) headed by Lt-Gen. Abdel Fattah Abdelrahman Burhan. But many activists believe that the actual person running the country now is the second in command Lt-Gen Mohammed Hamdan Dagalo, who is known for his hands in the genocide committed in Darfur.

Data collected by organizations suggest that security forces have killed at least 124 people in the capital and across the country, almost 700 people have been injured and more than 70 people have been raped by the military troops.

Protestors have not stopped and nor have the military, but the recognition from the world towards this crisis is still very little.

Countries like Saudi Arabia, Egypt and UAE have been giving good support to the military council because of good ties with Lt-Gen Dagalo. Fair elections seem impossible at this moment. Since the first protests erupted in December USA has been pretty non-supportive towards Sudan.

Only recently, the world is coming together to help Sudan. Organizations like The African Union, the European Union, the UK and the United States have condemned the violence. According to news reports Abiy Ahmed, the prime minister of Ethiopia, is trying to form a compromise. If it happens then the crisis will defuse, and if not then the country will still juggle between the demands of democracy and brutal military dictatorship.

What can you do?

The TMC in Sudan has shut down most of the internet giving concerns “national security”. This has stopped the major flow of happenings from inside the country to the outside world.

The crisis in Sudan needs to be heard by all the world governments. For that social media, users have been turning their profile picture blue. It was the favourite colour of Mohamed Mattar, a student who was shot on June 3 while protecting two women from Sudanese militia. The blue for Sudan movement is a show of solidarity to all victims of the crackdown. It is a way for raising Sudan’s voice to be heard.

Apart from that donation to UNICEF, Save the Children, and the International Rescue Committee is also being done to help the victims in Sudan.

A petition on Change.org is also running. It demands the UN to investigate and take strict actions on the military June 3 attack.

Most importantly, talking about it makes people aware through social media about the crisis. Share accurate and legit information about true donations to help the protestors. Talk about it and spread awareness so that finally authorities look over to the humanitarian crisis.