“You were ruining our family reputation. Living in with a man, without getting married. Oh, and the clothes you were wearing when we met that day in the city, so tight, so short.”

The writing cue for May 2019 is these lines from Victorian poet Christina Rossetti from her most famous poem Goblin Market.
“For there is no friend like a sister
In calm or stormy weather;
To cheer one on the tedious way,
To fetch one if one goes astray,
To lift one if one totters down,
To strengthen whilst one stands.”

The fourth winner of our May 2019 Muse of the Month contest is Preethi Warrier.

He crouched in one corner of the dimly lit room; it was eerie in there. The only sound he heard was of his own breathing, and there was no one outside.

“Hey!” he heard a female voice call out and he almost jumped in shock.

“How did you get in here?” he shuddered.

“Oh, I have my ways.” She smiled. “So, tell me, how do I look? Do these clothes suit me? I know you don’t like western attire, but nobody forbids me now.”

He looked away; he hated seeing her this way.

“Come here.” She commanded, “You look so filthy. Let me clean you up and comb your hair. Like I always did when we were young. I remember so well, you would push mother aside, it was only me you wanted. I would abandon all my chores and wash the mud off you.”

Of course, he remembered. Their village, their little mud shanty, and of course her, bent over the kerosene stove, cooking food and helping their mother.

“You would play all the time…” her voice brought him back from his memories. “If only you had studied a little and passed matriculation. I gave up my education, just so that you could go to school. And you dropped out in the eighth grade. All my sacrifice wasted! I could have continued my education. I was good at it, you know.”

He knew. He was the only son after two daughters and the pampered brat. She was the eldest, so she had to give up education and a lot more. He had not been an ideal son or a good brother, just a disruptive offspring of a chauvinist father. After their mother passed away following a prolonged illness, she had taken over the reins of the household. Which included being beaten up regularly by their father, and at times by him.

As if she read his thoughts, she continued, “At first I was happy when father suffered that stroke and got paralyzed. At least he stopped drinking and hitting. But then, working as domestic help in those apartments in the town wasn’t an easy task either. Did I have a choice? I had to feed you all, keep the kitchen fire burning. See how rough my hands got.” She displayed her palms to him, all coarse and peeled.

“But then, I won’t complain now, no regrets.” She went on. “I loved you all and did my best to help. When our sister threw a tantrum, threatened suicide and insisted on marrying her lover, I felt I couldn’t deny her that little happiness. Someone loved her and wished to marry her, how could I refuse that small dowry. Glad that she is happy with her husband and kids now, I feel blessed.”

He vividly remembered that day, when that sister of theirs had been married off in style. The girl wore decent amount of jewelry and all the expenditure was borne by his eldest sister, he didn’t earn anything and there were hardly any savings.

He looked at her, her face was calm. She seemed lost in thought, she spoke after a while. “I wished to get married too, but nobody ever fell in love with me. I was a servant after all, I looked ugly they said. You called me that often, whenever you returned home after a drunken brawl. Never told you then, but it hurt a lot. Being called ugly by your own brother…”

A little tear pricked his eye, once drunk, he would totally lose control on himself. She would reprimand him and he would get even by cursing her, calling her an ugly witch. Good their fatherpassed away, the old man didn’t have to watch his daughter enduring the pain inflicted on her by his son, for too long.

“Honestly, I never really liked your wife. I would not have accepted her in my household, she was notorious for her acid tongue and bad behavior. But you eloped with her, barged in with her one night. If I turned her away, every other man in the village would have shunned her. I took pity and do you know how she repaid me? You would always listen to her, let me clear my side today. I was being treated like an outsider in my own house, she accused me of stealing your privacy. Tell me dear brother, did I deserve to be humiliated like that? For your information, it really hurt when you insulted me while she watched. I will never forgive you.” She wept.

He couldn’t bring himself to look at her, he had constantly wronged her and she had tolerated silently. Perhaps because he was her blood, her kin, she had hoped for some respite from him. But then, everybody gives up at some time and she had too. He recalled, he had celebrated with his wife, when his sister had left home forever. They now had the house and their lives, all to themselves.

He heard her voice again, “I didn’t get a chance to tell you, my life took a turn for the better when I left you. One of the ladies for whom I worked was running a beauty salon. She sympathized with me, offered me a small job at her parlor, I learnt something new every day. The city was good to me, I shared a room with three other girls. We laughed, we squabbled, we were together all the time. One was an acid victim, one, a rape survivor, we all had our own stories of betrayal but then we were happy. Until he walked into my life. Oh, I couldn’t talk to you about him, let me tell you. He was the owner’s son, almost my age, handsome, educated. I don’t know how he took a liking for me, but we did enjoy each other’s company. He said I was very strong and resilient, he admired me for that. I started learning English, dressing up well, I started living, for the very first time. I was skeptical about moving in with him, but then, these are modern times. And the city people never cared. We moved in together, I loved him, my past wasn’t haunting me anymore. I was a happy, modern, independent woman of the new generation. Till YOU returned. ”

“Of course, I had to.” he blasted at her. “You were ruining our family reputation. Living in with a man, without getting married. Oh, and the clothes you were wearing when we met that day in the city, so tight, so short. I was so embarrassed. In spite of all that, I forgave you, I requested you to return home, but you refused. You were hell bent on bringing shame to our family, so…”

“So you conveniently bumped me off, snuffed out my life. Wasn’t I entitled for a pinch of happiness? You were bringing laurels to the family anyway, drinking, losing your menial job, abusing your wife. Do I not know that she deserted you long back? How dare you dictate my life, how dare you…”she broke off. “I am glad, women around the globe fought for me, got me justice, got you here, to pay for your heinous crime. A life sentence, good.”

“So what are you here for, killing me? Do it then. But there will be no remorse from my side. Remember.” He screamed.

She moved closer to him, “I won’t kill you, nor do I believe in capital punishment. You are my brother, I sacrificed a lifetime for you. I will visit you every day, and make sure you realize your mistake. I will make a new man out of you, you will respect us women by the time I am finished. I won’t rest in peace until I eliminate the bigot in you. Till then, Bye.”

Image source: a still from the movie Stree 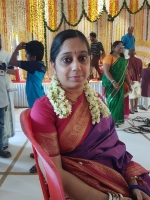 Dirty Picture. Be Inspired And Write For Our Muse Of The Month June 2017

Frozen. Be Inspired And Write For Our Muse Of The Month May 2017

Dum Laga Ke Haisha. Be Inspired And Write For Our Muse Of The Month November 2017