Meet Shukla Lal, The Woman Of Many Stories Who Published Her First Book At 80

When age is just a number: meet Shukla Lal, an octogenarian, producing literary gems and spreading the joy of life at the ripe old age of 81!

Born in the pre-independence era of India, Mrs Shukla Lal has traversed the echelons of time through the phase of the partition, the early socialist governance, the liberalization era, and the present era of computerization and modernisation. She has the unique experience of witnessing history in the making. Her stories are woven through the tapestry of social change, the values of unity in diversity, and an outlook of positivity and spirituality in life.

Born in the Golden city of Amritsar, she spent her childhood in the folds of a close-knit Punjabi family with her parents, siblings and doting grandparents. Her father worked in the insurance sector and his transferable job took the entire family to Lahore.

Her family had a tradition of making trips to Shimla every year. On one such trip, when she was about 10 years old or so, the country went through partition and the family stayed on in India. She did her schooling from Amritsar and stayed in different cities of the country including Chennai, (then Madras), Shimla, Ooty, Nagpur, and Hyderabad before doing her B.Ed. from Calcutta. Over 40 years later, she moved to Delhi and continues to stay there with her family.

Her life’s mission is teaching and taking care of children with special needs. Full of mirth, vigour, and positivity, Mrs Shukla Lal’s writing style reconfirms her romantic view of life, “I am a romantic and an idealist by nature and find true romance scattered everywhere irrespective of class, creed, religion, nationality or age.”

I was intrigued by her producing two literary gems, Rano and Phulo and Floating Logs after turning 80 years old. At an age when most people retire from the humdrum of daily life, she has elegantly retired to a noble purpose of writing in her life.

Books that come from a place of positivity

She describes her motivation to do so as “a bubbling of emotions and feelings inside her which had to be put down on paper for the younger generations to read.” She describes her books as an outcome of her “desire to speak on paper through the medium of writing.” 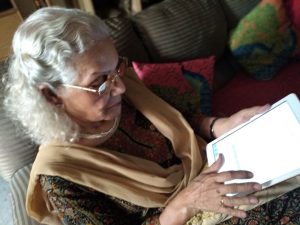 Drawn into spirituality and meditation practice, Shukla Lal’s books evoke a feeling of happiness, joy and positivity. They are her legacy to her grandchildren and future generations, and serve as a window to the world of yesteryears where our nation went through a period of communal turmoil, disintegration and uprooting of lives. She says that even in these times of distress and discord, it was the communal harmony which accepted the rapid changes taking place in society at that time. It was the resilience of people who lived through these turbulent times that ultimately accepted the influx of new people and brought them together as one. With a twinkle in her eyes, she says, “Like a phoenix rising from ashes, India rose again.”

Mrs Shukla Lal celebrates the aspect of unity in diversity which makes this country great. “Just like a spoonful of sugar helps a bitter medicine go down one’s throat, similarly, it was the element of communal harmony and oneness that brought people together during the painful transition phase of our country.” This feeling of togetherness evokes in her feelings of happiness, hope and a joy that she pens down in the form of short stories, novels and poems (nazms). Her wonderful sense of delight and positivity is a commonality that runs through all her writings and gives a strong message to people of the need to remain cheerful, joyful and maintain a positive outlook towards life even in the direst circumstances. In her own words, in all her books, ‘The Provincialism of Pre-Partition India gave away to a Pan-India Indianness.’ 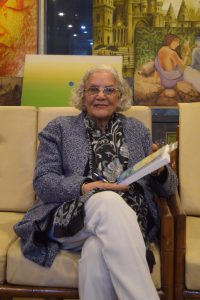 The octogenarian has a radiance about her as she speaks to me about the need for love in today’s world. Love is the salve that heals all wounds and makes the world go on. ‘Love, love and love some more until it hurts,’ she declares triumphantly stating Mother Teresa. She urges the younger generation to be more accepting, more forgiving and more loving in order to lead a fuller and more meaningful life. She says that we should send out good thoughts to people, especially to those who do not do good to us as they need it the most. Her daughter, Mrs Sonia Kullar, recalls a fond expression her mother used to use when she was a child and would approach her mother to talk about an issue bothering her. ‘Put the cloak of goodness on that person,’ Mrs Lal would teach her daughter gently. The more good deeds you do, the greater is your own sum total of goodwill that accrues in this life.

Growing up with books

Shukla Lal grew up reading Jane Eyre, Daphne Du Maurier, Alexander Dumas, Lloyd C Douglas, and in recent times the work of Arundhati Roy and Vikram Seth among others. She remembers being vividly impressed by Lloyd C Douglas’ The Robe, which is a timeless story of adventure, faith, spirituality, romance and redemption. She feels the book has so eloquently narrated facts about Christianity that it brings the readers much closer to that era than most other books.

Mrs Shukla Lal takes me centuries back in time as she fondly recalls her grandmother and great-grandmother. She says that her grandmother made it abundantly clear at that time that the girls of the family were to be provided equal education as the boys. To a large extent, the author owes her education and upbringing to her grandparents’ and parents’ progressive outlook towards girls’ education. She says at her home, women were taught to be at par with men and work alongside them rather than just towing their lines. She feels during the era of independence, women breaking the shackles of household and contributing to society was akin to the nation breaking the shackles of provincialism and trying to unify.

Her words reek of wisdom and she dazzles with brilliance as she looks at me with those penetrating bight eyes and says she has a feeling that she has already met me somewhere. I sink back in my chair with a humbling sense of gratitude as I marvel upon the enigma of life that connects us all in strange and mysterious ways. Maybe meeting me is simply a page out of her book of life written with endearing love, witty charm, and hopeless romanticism.

A message to upcoming authors

When I asked her if she has any pointers for new and upcoming authors, she shares insights from her own personal style of writing. ‘Be excited about the genre you want to write in and then write,’ she says. There is an overpowering feeling of words pouring down on paper when she has something to write about. She usually has a rudimentary vision of the beginning, middle and end of a story which she then weaves through into a heartfelt story by drawing upon her experiences, spirituality and life lessons. 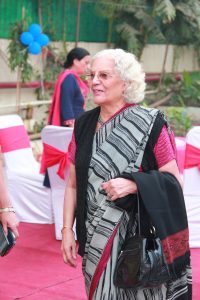 This is a love story set against the backdrop of partition. It traces the lives and loves of its two protagonists, Rano and Phulo who face the trauma of partition, and though being completely different culturally, came together as one.

This novel spans through six decades of the cultural milieu of Calcutta, and London. It is the love story of its protagonist, Meher, a young man who learns to live, laugh and love in his life.

The third novel by the author is being penned down as we write. It is set against the backdrop of Lahore, Delhi and Mumbai (earlier Bombay) and will be published by the end of the year.

These Nazms (poems) are her first ever poetic compositions in spoken Urdu or Hindustani. Through these short poems, the author clearly shows her ability to paint word pictures, her philosophical bent of mind and her delight in her surroundings.

This is a collection of eight short stories drawing from her personal childhood experiences, written with her trademark conversational style and rich descriptive style.