The women entrepreneurs of North East India are very little known outside their own region – we bring you here some truly innovative success stories!

Northeast India, covering the eight states of Arunachal Pradesh, Assam, Manipur, Meghalaya, Mizoram, Nagaland, and Tripura is famously known for its many enterprising women who take their fair share in economic activity and contributing to society.

Most women in these states engage in economic activity in some form or the other, at various levels, from home based income generating activities to opening high end fashion stores and larger businesses such as food processing units.

The women entrepreneurs of North East India are a force to reckon with!

Here are some truly inspiring women entrepreneurs from North East India, amongst many others, just for you to catch a glimpse of women in the region’s economic engagement and how far they have come.

You can get a picture of the region through the lens of these admirable and highly resourceful women.

An agricultural engineer, Rita Tage turned Ziro’s locally abundant Kiwi fruit into one of the finest wines in India. Rita Tage is the Chairperson and Managing Director of Lambu-Subu Food, and her company produced the country’s first organic kiwi wine, and was launched in October 2017. The commercial wine was branded Naara Aaba.

Kiwi production in Arunachal Pradesh is around 9,428 metric tonnes annually. Rita’s winery has a plant capacity of 40,000 litres per batch.

According to Rita Tage, the winery provides the important solution of closing the gap between tradition and technology. This commercial venture has changed and touched the lives of many farmers, who were on the verge of giving up farming of Kiwi. The 2,300 sqft winery in Ziro currently employs over 25 people formally and many other local farmers are engaged directly and indirectly. 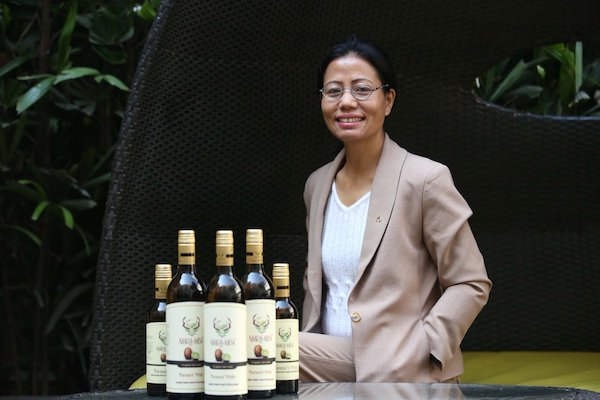 The Kiwi fruit used is completely organic; the farming is done without any chemical fertilisers. The factory follows all norms of pollution control and manufacturing/production systems. The Naara Aaba wine has been given a clean certificate of composition, according to lab analyses.

Rita Tage says, “It was just the most logical thing to do — the fruit does extremely well in this climate. The abundant sunshine of Ziro contributes to optimum growth and taste of the fruit”. The barren and rolling hill slopes of the Ziro Valley are now filled with clusters of kiwi.

Business and Activism! yes that’s right, NEthing is a model conceptualised and initiated by Banamallika Choudhary.

Started in 2017, Banamallika says, “Living in Guwahati, I had always felt the need for a space that will hold all things creative, constructive and intellectual”. It’s her dream project – “a bookstore, a cafe, a store that holds locally made, environment friendly products and gatherings of people to share their poetry, music, writings, thoughts and ideas”. 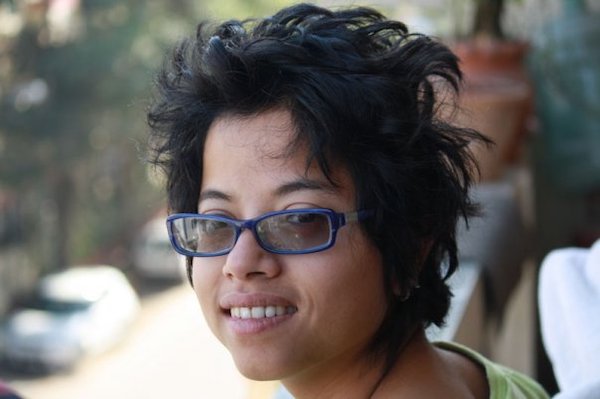 In her early 40s and a mother of a 4-year-old girl, Banamallika Choudhury has been working in the development sector for quite a while, but soon quit to start her own dream project. “At NEthing I am trying to bring together art, culture, literature, design, activism and adda. This is where I find my ikigai,” she says, “I call it a feminist business model.” Banamallika used her gratuity as well as assistance from well-wishers to launch the project.

Currently, they have four paid women employees, while many others are engaged either directly or indirectly. Banamallika says that the model is that it is on a need based salary structure with equal profit sharing between employees. The emphasis is on an equal, environmentally friendly business that she feels will challenge the patriarchal capitalist business motive of paying less and accumulating unfair wealth.

Meira Foods is today a household name in Manipur. The packaged food company was started by Shubhra Devi in 2004.

Shubhra completed her Masters’ Degree in Food and Nutrition from Banasthali Bidyapith, Rajasthan. After working in the development sector for more 10 years, she took the plunge to venture into the packaged food industry.

Initially she started with only a few hundred rupees but today, Meira Foods’ products are available in local shops across Manipur. Meira’s products consist mainly of pickles, candies and salted dry fruit items. The uniqueness of Meira’s products is that all the products are prepared from indigenous fruits and vegetables of Manipur. 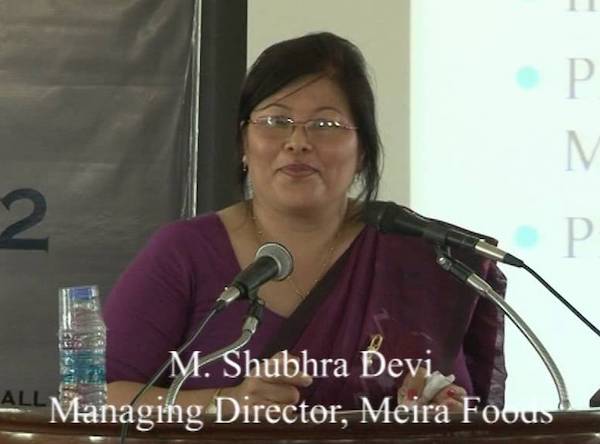 Shubhra has a simple answer to how she started her venture and how it grows, “Whatever we earn we invest and our machinery, stocks and our trained dedicated staff are our assets.”

Armed with a degree in management education from BIMM, Pune, she decided to return to her roots to work towards change and development in the North East of India. The core reason for her return to her roots and starting her own venture was to help generate self- employment opportunities for the artisans, particularly the weavers, of the state of Meghalaya. 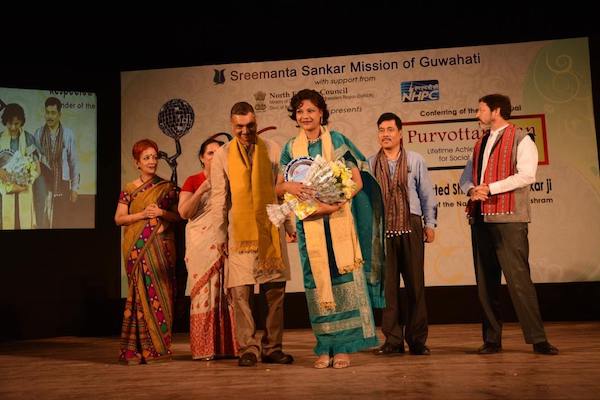 The Ethnic Fashion House aims to revive, sustain and promote the tradition and culture of Northeast India through ‘Fashion with a Cause’ while giving employment to traditional artisans. A high end fashion house, their work has now gone global and has been showcased at various international fairs in US and Europe.

The duo mostly work on silk fabric made by Eri silk worms, locally called Niang Ryndia. Jannessaline and Daniel have been instrumental in promoting traditional women weavers, by making their craft economically viable and taking it to world class fashion.

Initiated in 1997, a widow and a mother of 3 children Zomawii took over the kakery on her own in 2010 after her partner and husband passed away. Initially running a small family grocery store, Hrahsel and her husband often used to make make cakes and other bakery items for sale in their shop. The bakery products began to sell more than their other grocery items. That was how the duo turn their attention to bakery production.

Soon their products gained momentum and are now in great demand in Aizawl and other parts of Mizoram. From engaging a few employees it has grown to a more than 10 member team.

The unique selling point for Tepuia Chaang is its quality, taste and innovative product and ingredients that suit the local taste buds. Their annual sales come up-to to over 50 lakhs per year. Their products range from biscuits to cakes for various events and occasion.

Meanwhile Hrahsel is also involved in local philanthropy and gives out bakery products on special events such as Christmas to the disadvantaged.

In her early 50s now, Jesmina Zeliang wears many hats. She is the Founder/Proprietor of Cane Concepts established in 1993 – manufacturing and exporting cane and bamboo products. She opened a high end store Konyak, a specialty outlet selling products from Nagaland, located in Guwahati and Dibrugarh (Assam). 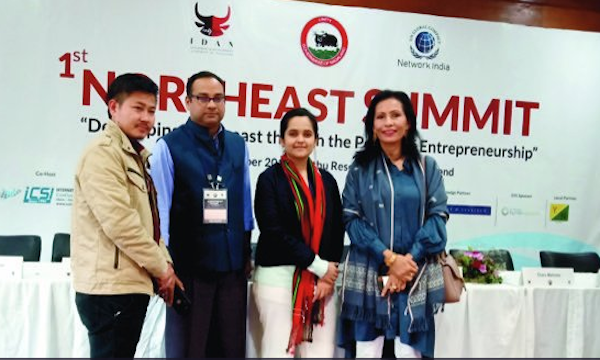 Her firm Heirloom Naga was started in the early 90s, which  created innovation in the existing Naga textiles and beginning work with female loom weavers, today the firm has over 30 clusters of weavers spread across multiple villages in Nagaland state.

Jesmina is also the official marketing agent for Fabindia in Northeast India. Besides handloom and handicrafts, Jesmina is the Founding Partner of Razhü Pru, a heritage hotel located in Kohima.

For more than 15 years now, Archita a resident of Amtali, has been growing the business successfully. Over the years the hatchery has produced more than three lakhs chicken every year.

Archita began her journey in 1995 with a small loan of 5 lakhs to start her poultry business. Initially the scale of business was small and had a monthly hatching capacity of only 2500 chicks. In the second phase it was increased to 13,500. With the success of the hatchery she was able to repay her government loan and then again in 2007, she took another loan of Rs 19,47,000 from the State Bank of India to further increase hatching capacity of her unit by installing the latest hatching machineries.

A young arts graduate then, Archita preferred to venture on her own rather than go for a government job. She discovered that there was huge import of eggs and chickens from outside her state and that is how she decided to start the hatchery- poultry. Her work not only provides employment but reduce dependency on other states for eggs and chickens.

In an interview Archita says, “Now, the situation has changed and we supply chicken throughout the state. Poultry farms have come up in the entire state unlike earlier when there were a few poultry farms. So, our hatchery business is doing well as demand has increased.”

These women entrepreneurs from North East India have each broken multiple barriers – many of us in mainland India still know very little about our sisters in the North East – it’s time to celebrate the achievements of these stellar business women and many more unsung women like them!