“A film cannot solve all the problems, but can certainly open a dialogue,” says Vibha Bakshi about her new film SON RISE, and hopes that involvement of men in gender issues is a step in the right direction.

India’s battle with gender equality is as old as the proverbial adage, a storm in a tea-cup. Women holding on to straw strings, hoping that the pot of gold at the end of the rainbow will somehow come one day. To prolific national award winning filmmaker, Vibha Bakshi, creator of the spine-chilling post Nirbhaya narrative Daughters of Mother India, shaking up the status quo is a constant exercise. It also comes naturally to her.

Says Vibha, “Through Daughters of Mother India I wanted to make everyone take the responsibility of putting the shame where it is supposed to be, that we had all failed as a society. But then we reacted to the violence in a way that no other country in the world has.”

Battling bottlenecks and a de-sensitized population including police stations and the women in police uniforms, Vibha spent hours with the Delhi police being privy to the mechanisms and prejudices ailing the police force. “A reflection of how society thinks. If we think domestic violence is a gharelu maamla (domestic home problem), the police think that too. Which is why we, as a people and as a society, need to change that. However, what has changed post the protests and the film, is the increase in reporting a crime through the help-lines. Which means that the shame is now being transferred from the survivor, to the perpetrator. We are definitely on the radar. The media has played a critical role in this change and we have to keep talking about it, otherwise people forget,” Vibha says passionately.

With SON RISE, a powerful gender rights film recently released in Mumbai with much fanfare, in the august company of UN Under-Secretary General, Phumzile Mlambo-Ngcuka, and Head of UN Women, Nishtha Satyam, the film is a bold stand by men to motivate other men to become part of the struggle for gender equality and inspire other men to follow. Supported by UN Women as part of their #HeForShe campaign, the film aims to collect a million pledges towards this global movement. 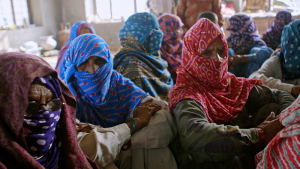 Set in Haryana, a strong patriarchal society with a highly skewed sex ratio due to rampant illegal sex determination and female foeticide, SON RISE touches on the sex ratio imbalance that has led to unprecedented levels of gender crimes, ranging from bride trafficking to gang rapes. It is in this land of the ’Khap’ panchayat that the filmmaker finds ‘ordinary’ men taking on the ‘extraordinary’ fight to change the narrative on gender inequality.

From a forward-thinking Sarpanch fighting for women to enter the male-dominated arena of local-politics, to a farmer who, in an arranged marriage, decides to marry a gang rape survivor and vows to support to the end, her fight for justice. Can these glimmers of a changing paradigm in SON RISE be the rays of hope we have been looking for?

Vibha Bakshi shares that the tide could be turning for India in an interview.

Following the stupendous success of Daughters of Mother India, how did SON RISE come about?

Vibha: Two years ago, my film Daughters of Mother India which put the spotlight on the issue of rape and gender violence was being screened in Haryana, a state in India which is infamous for having the most skewed sex ratios in the country. 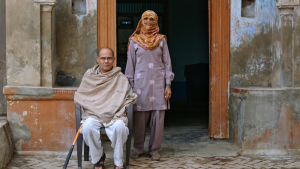 A social activist told me about a farmer from Haryana, who in an arranged marriage had married a gang rape survivor and is fighting for her justice. However, she did not have a name or address for the farmer. With the help of the Police, I did manage to find him. When we were searching for his house, the villagers would derisively ask, woh aadmi…THAT man! I found the farmer had been almost socially shunned from his society for marrying a gang rape survivor. During our conversations, his wife used to come and sit with us. For the first three-four meetings, I didn’t go with the camera. Slowly, they started trusting us. One day, his wife took off the veil and said that she had no reason to feel ashamed or hide. It is the rapists who should be punished and ostracized from society. We began filming.

When I started spending more time with the family, I felt there must be more such men – men who have grown up in the seat of patriarchy, in the under belly of biases, fighting to change the narrative on inequality. And we found them! And that’s how SON RISE began.

What has been your experience whilst making this movie?

Vibha: Filming in Haryana was challenging on many fronts. It is almost the seat of patriarchy in India. I knew before going into this that being a woman and questioning the men of the State is going to be tough. It must have been equally hard for the men to accept me too! The hardest was interviewing the biggest and most influential ‘Khap’ Chief Baljit Singh Malik who has nearly 2,000 villages under his leadership. Access was not easy. Initially, the Khap leader was uncomfortable to even make eye contact with a woman questioning him. And I didn’t approve of his views on gender either. It was only when I stopped judging him and put my views aside, that a meaningful conversation began.

‘Khaps’ continue to play a very important role in Haryana society as far as social issues are concerned. It is the land of the ‘Khap’. You can’t do it without them. This same ‘Khap’ leader who did not want to make eye contact with me two years ago, is now leading a drive to end the tradition of wearing a veil by women, and has asked the people to end female foeticide. If this man, who happens to be one of the most influential figures, is willing to change, why can’t others? I will make sure that the film is screened in every ‘Khap’ to tell them that you have the social power – use it judiciously and responsibly. 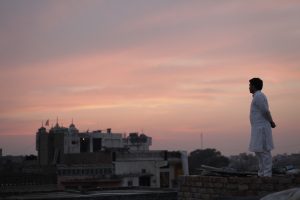 How much have your films changed you, spiritually, philosophically and creatively?

Vibha: I have changed in many ways. As a filmmaker I have realized the paramount importance of being non-judgemental. It is easy to sensationalize issues. Very hard to sensitize people. Gender biases, gender violence is not an India issue alone. It‘s not a rural versus urban issue. It is everywhere. It is a global reality. And I salute to all the people of Haryana who dared to break silence on issues kept hidden in India and many parts of the world.

As a film-maker, how much global awareness and difference to ground reality do you hope to achieve with your films?

Vibha: I believe in using the power of media to make responsible films – films that catalyse change through inclusion and unity, by taking positive examples in an otherwise challenging situation. A film may not change the world, but it can certainly break the conspiracy of silence that surrounds many burning issues, such as gender violence and gender inequality. As a filmmaker, it is easy to sensationalize, very hard to sensitize.

Through SON RISE, we hope to stir a dialogue that will change the narrative on masculinity by encouraging men to stand together in solidarity with women to accelerate the path to gender equality. We are humbled and honoured that UN Women has partnered with us (post-completion) to use SON RISE to unleash a movement on the ground. We hope to screen SON RISE globally and collect a million pledges as part of the United Nations’ HeForShe global campaign.

Do we see SON RISE getting into the film festival circuit? Has the Prime Minister seen it yet?

Vibha: My Co- Director and Academy Award winning filmmaker Maryann Deleo who is also my mentor said to me “You do not choose a film. The film chooses you.” I truly believe a film has its own destiny. My earlier film Daughters of Mother India went way beyond our expectations, winning the National Film Award from the President of India, the highest honour in Indian films. The film also holds the distinction of the most awarded social campaign in the world under the Global Creative Index 2017.

When your intent and emotion is right, the universe will embrace you! We hope the same for SON RISE. Screenings have begun and I am humbled and grateful to share we have received full house standing ovations for all our screenings so far. 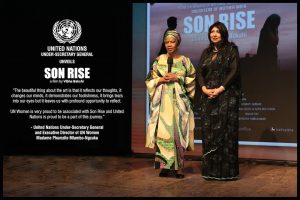 We are honoured and humbled to have UN Under –Secretary General and Executive Director of UN Women Madame Phumzile unveil SON RISE. We are overwhelmed and grateful to have the UN endorse SON RISE. This itself is a huge triumph! It’s time for men to be part of the struggle for equality and we are confident they will take SON RISE forward.

One outcome you hope to achieve with SON RISE.

Vibha: Women must have the freedom to make decisions on their lives. Through this film, we hope to create a dialogue in changing mindsets towards women and girls, and building a society where everyone is treated equally and has the same safeguards against violence.  It’s time for men to get involved in changing the narrative towards gender equality and set examples for other men to follow. 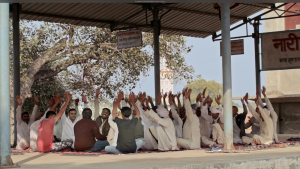 We plan to take SON RISE across villages, schools, colleges India and make men a part of conversation in changing the narrative around gender inequality. A film cannot solve all the problems, but can certainly open a dialogue. Gender violence and gender biases is not only an India issue. It is a global reality.

Kudos To Srishti Bakshi, Who Walked 3800 Kms To Help Make India A Safer Place For Women