The Ambani wedding in December 2018 was an exercise in a vulgar display of wealth, and an opportunity that Mukesh and Nita Ambani lost to set a better example to Indians who look up to the rich and influential.

The Ambani wedding in December 2018 was an exercise in a vulgar display of wealth, and an opportunity that Mukesh and Nita Ambani lost to set a better example to Indians who look up to the rich and influential.

With festivities spread over four months and three locations, the marriage of Isha Ambani, daughter of Mukesh Ambani, Chairman of Reliance Industries, with Anand Piramal, scion of the Piramal Enterprises, has been estimated to have clocked an expenditure close to a whopping $100 million (Rs. 7,08,05,00,000/-).

The wedding invitation card alone was worth Rs. 3,00,000/- each, the most expensive invitation card in the history of Indian weddings. To set things in context, this amount is close what an average household of the Indian middle class earns, in an entire year.

The extravagance began with the couple’s engagement attended by more than 600 guests at the luxury Villa D’Este Hotel on Italy’s Lake Como, peppered with Singer John Legend’s private performance. This was followed by elaborate pre-wedding ceremonies at the luxurious Oberoi Udaivilas Hotel in the Indian city of Udaipur. 200 chartered flights to fly in over 2000 guests from the Udaipur airport, a fleet of luxury cars to ferry them within the city, and American pop sensation Beyonce’s private concert are a few highlights. 12th December saw the marriage at Ambani’s 27-storey Mumbai residence, Antilia, the second-most expensive private property after London’s Buckingham Palace.

Now that the elaborate fanfare is over, I’d like to paint an alternate scenario.

What if Ambani, being an influencer, the only Indian businessman on Forbes’ 2017 list of the world’s most powerful people, the man whose actions are seen and heard, and even emulated by millions in this country – made the ‘conscious choice’ to conduct the wedding with one simple and graceful ceremony? A wedding that displays austerity and purpose, actively discouraging garish opulence. A wedding that exercises restraint as opposed to the conservative ritual-heavy pomp and show exhibiting a grotesque spending spree. 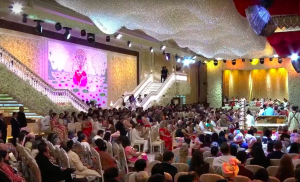 One can only imagine the transformational impact of such a choice in a country like India where marriage as an institution is treated as crucial to existence as inhaling oxygen. Parents live under inexplicable burden of incurring expenditure on their daughter’s wedding, way beyond their means. Families, cutting across socio-economic strata, are victims of the mindset that a big fat wedding is key to social acceptance. Sons are habituated to the practice of a range of deplorable social evils rooted in ostentatious ceremonies including the illegal demand for dowry (an amount of property or money brought by a bride to her husband on their marriage), and bride-burning on non-fulfilment of such demand.

Let’s take the case of an average construction worker, slogging hard all his life, making a measly sum, up to $3 per day. On the threshold of debt and poverty, he saves bit by bit to collect enough booty for his daughter’s wedding. If he had seen an austere arrangement instead of the biggest and the fattest glimpses of the Ambani wedding, he’d have the courage to get up and shut all those taking mouths to say – “Look what Mukesh ‘bhai’ (brother) did. Look at what the richest man of India did. If such a ‘badaa aadmi’ (big man) can perform a simple wedding for his daughter, then why should I, an ‘aam aadmi’ (common man), spend foolishly on that one day? I’d rather give that money to my daughter to secure her future post marriage.”

And with that, Ambani could’ve truly become a ‘badaa aadmi’ (big man). Not by net worth, but by respect. A respect that is earned, not demanded. He could’ve set a personal example of progressive thinking and sensibility for millions of this country. He could’ve become the hero of forward-looking couples who, despite having a high spending capacity, are going against the grain, convincing their families to focus on the dignity of marriage instead of creating an irrational spectacle. He could’ve become a symbol of a new culture – choosing substance over extravagance. And a lot more.

What a colossal loss of opportunity.

I appreciate that the how and why of a daughter’s wedding is the family’s personal decision. However, when the father of the bride is a public figure and in a position to influence minds, he owes a degree of responsibility, sensitivity, and foresightedness to the common man.

Because while a public figure such as Ambani is not responsible for giving birth to such regressive mindsets, he is certainly responsible for reinforcing and propagating them. 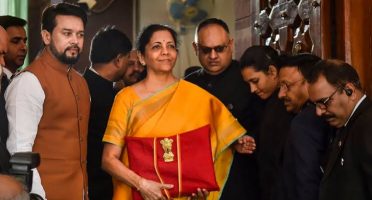