Pushed To It By The Mother In Her, She Finally Decided On The Road Untaken

It was the first time Aditya had seen her since she left him, or maybe, love left the two of them. Seven years back, Aditya and Priya had been husband and wife, now they were complete strangers.

It was the first time Aditya had seen her since she left him, or maybe, love left the two of them. Seven years back, Aditya and Priya had been husband and wife, now they were complete strangers.

He sat on the window ledge in a shaded corner of his room, trying to think of some way he could redeem himself in her eyes. His thoughts wandered to the morning debacle. Priya, lifting her three years old daughter in the air, kissing her nose, laughing and playing with her. And there he watched both of them, just across the road, all alone, cursing himself, repenting and lamenting. It was the first time Aditya had seen her since she left him, or maybe, love left the two of them. Seven years back, Aditya and Priya had been husband and wife, now they were complete strangers. Lost in reverie, as the smoke from his cigarette filled his room, Aditya gazed out of the window, his eyes suffused with tears, as he remembered those years…

There lay Aditya, in the middle of the road, his blue geared bicycle – his second love, over him. His bicycle had slipped, but there was no stone or impediment on the road, yet Aditya’s bicycle tumbled and he tripped off it and he was there on road, lost in his world, his eyes yearning for her.

Yes, this little boy was in love. When his classmates were busy in their books, when sine and cos were what he should be thinking of, his eyes met her, Priya – the love of his life or his life herself. Aditya had no idea what was going in his head, perhaps it was not his head but his heart that was doing all to him. He saw her for the first time in the grocery store. Petite, ziti faced, two ponytails, yellow frock, and green bellies. Aditya clearly remembered what Priya looked like the first time his heart skipped a beat. From the day onwards his heart seemed to beat only for Priya. He followed her to school, Priya in an army truck, and Aditya pedaling his cycle, his heart throbbing more due to the speed of pedaling to match the truck’s speed. He used to wait until Priya came out of the truck and walked towards her class. It was only when Priya went out of sight that he left to attend his class eleventh all the way pedaling back in the opposite direction.

Time was on their side. They grew, not only in their careers but also in their relationship. Soon they were engaged and later married, promising to love each other, until life remains at their end or even after that. Both were settled in Banglore, miles away from their families, making the life of their own, just the two of them. And one day Priya declared, “We are going to be three”. Aditya’s joy knew no bound as he lifted Priya in his arms, taking her around the house, ecstasy hitting both the lovebirds.

Aditya broke this happy news to his mother, who lost no time in coming to Bangalore to take care of her pregnant daughter in law. On the dinner table, she said something that changed Priya’s life forever. She asked Priya to go for sex determination, the idea which Priya and Aditya dismissed, no sooner had the heard it. The next few days of Aditya’s mother were spent in cajoling her docile son for the sex determination. The ardent son as was he, Aditya finally agreed.

The next morning Priya was sitting in a scan center, which her beloved husband had bribed for performing Pre Natal Diagnostic test to determine the sex of their unborn child. The reports came, and it did not take much for Aditya’s mother to persuade his henpecked son for abortion. An appointment after fifteen days was given by the surgeon.

Time passed as usual, but something between Priya and Aditya had changed now. There was barely any exchange of words, except the mechanical greeting in the morning and before going to bed. If ever their bodies touched each other, they were by chance and not a choice. They seldom went out. Priya spent a solitary fortnight. Her office and home were the only two places she went beside the near department store for daily grocery. She was no longer the happy go,lucky soul. She spent little time in grooming herself. She looked scary with her untidy bun, puffy eyes shadowed with dark circles and obsolete unironed clothes. She made fewer calls to her parents, for the fear of communicating her sadness.

The evening before the operation, she was sitting on the window ledge; the place where Aditya and she often sat. She thought her life had two roads, one that leads to abortion and the second to end her life. There seemed no other option; either of the two roads were to be taken. She thought of her parents. How proud her father was of Priya. How her mother used to cook Priya’s favorite meal. Priya felt that she was the worst daughter. She had let down her family. They trusted her and she trusted Aditya. Priya didn’t have the courage to die. She felt she was merely good at nothing.

The next day, Priya was sitting in the corridor of the operation theatre, under the surveillance of her mother in law. She saw photographs of babies hanging on the walls. Aditya and Priya’s dreams of rearing their baby, first step, first bite, first day at school, all had been planned by them. She remembered how Adiya had yearned for a baby girl. But now the scenario was different. Engrossed was Priya in her thoughts, she missed Aditya, his warmth, his company, and tears started rolling down her eyes. She placed her hand on her tummy. She felt a new life inside her.

“Mrs. Priya”, came the voice from the other side of the corridor. It was Priya’s turn. She stood up, having made a decision, with firm steps she moved towards the exit door to take the third road- the road untaken. 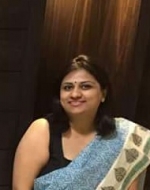 I’m a daydream and a night thinker. Professionally I am a Policy Lawyer, by academics I’m pursuing my PhD, by hobby I’m a Writer, by mind and courage I'm a Woman, read more...