In Pictures: What Depression Feels Like Inside, Even If I Don’t ‘Appear’ Depressed

Chester Bennington's death by suicide sparked a worldwide campaign on depression awareness. Here's my attempt to show you, through pictures and words, what depression feels like in our minds.

Chester Bennington’s death by suicide sparked a worldwide campaign on depression awareness. Here’s my attempt to show you, through pictures and words, what depression feels like in our minds.

“You may say that I look just like you do.
Some may say that I’ve got it better than most others.
I’ve got a room of my own, and a private income, and the luxury to write.
Yet, there have days I’ve talked in confidence with my trusty old coat.
The same one with bronze buttons.
We’ve spoken about what it would be like.
Filling up my pockets with stone.
Taking one step after another.
How cold would the water be?
How cruel?
Will I suffer?
Did Virginia?”

– Introduction by Rohini Lall, author of ‘The Sour Faced Moon”. You can follow her on Instagram here.

Depression has many faces. None of which look like what you think.

It’s like being in a secret society, leading a double life. The one others see, and the one you actually live through. Except that this is one society no one wills themselves to be part of.

In this series I will attempt to show you two sides. The face that those of us who have gone through depression show to the world. And the very real battle we face every day, with our inner selves.

We live in a carefully curated reality. We live our lives online – from our mail, to our daily work, to shopping, to social media. The WHO estimates that about 300 million people worldwide have depression in some form. Statistics say that 3.196 billion people in the world use social media. Let that sink in.

It’s harder than ever before, to know who among those you know and don’t know, might be suffering silently. Our perfect Instagram feeds and Facebook statuses show only a fraction of our real lives. A fact many people still don’t realize. Last year, on July 20, 2017, Chester Bennington, lead singer of Linkin Park, succumbed to his inner demons and died by suicide. Demons he had been battling since he was a teen. From years of sexual abuse, which further spiralled into self-loathing and addiction. But he had a gift, which we’re all lucky to have been able to share in. His music.
Generations will remember head-banging to Linkin Park’s music as he poured his heart and soul into his music, through his voice.

His voice, much like the late great Chris Cornell, was ‘anguish, pain and joy all wrapped in one’. He was a caring father, a dear friend, a loving husband. A guy who was so full of life and laughter. Most of the world saw him as a ‘rock star’, criticizing him for something which he couldn’t control. The truth is, depression does not discriminate. It has zilch to do with how rich or poor or ‘blessed’ you are. It’s a condition of the brain, and sometimes, when this condition gets very severe, it can lead to death, like in his case.

Do you want to know what the face of depression is?

It’s this. This was Chester Bennington, mere days before his death. People don’t go around with sad faces, or show any obvious signs of depression. It’s got to do with the human will to go on with work or life and try to block hindrances as far as possible. There are many different kinds of depression too. For some like Chester Bennington, they go through it despite being full of energy on the surface. Your body tries to cope in whatever way your mind can’t. So that answers the question ‘Why did he/she do it? They were so happy and full of life,’ etc.

And now, this is how it actually feels, on the inside. Above all else, depression is also the feeling of helplessness, of loss of control. You know how miserable you feel when you fall physically sick? That discomfort? Imagine that, only, it’s your mind that’s fallen ill. Suddenly, the easiest of tasks seem mammoth. Getting out of bed. Getting dressed. Doing tasks. You no longer recognize yourself. You feel like something’s trapping you, blocking you from truly enjoying things or doing the simplest of tasks. Sometimes you’re super high, others it’s like ‘rock bottom, 50 feet of crap, then me’ – as Rachel from Friends said. You watch helplessly as things slip through your fingers. As your friends and family seem to get alienated by you. Even if they don’t know what you’re going through. You want to talk to someone but can’t muster up the courage too. This is one of the reasons why most people don’t easily open up about it. The 5 signs of Emotional Well-being

Chester Bennington’s wife Talinda, along with the organization 320 Changes Direction, has talked about the 5 signs of emotional well-being. They help you determine if someone is in need of care or help.

What NOT to say to someone with depression

Basically there’s only one good thing you can say. “I’m sorry to hear you’re struggling, I’m here for you if you need anything at all”. That’s all.

What YOU can do to help

Depression is a difficult topic and an even more difficult condition to deal with. As a friend/ally, all you really can do is spread more awareness, and offer your support for someone who has it. Show compassion, and don’t judge. That’s all that really matters, and the person will appreciate you for it.

Thank you for the memories, Chester. And for sparking this fire in all of us to ensure we help everyone who dealt with what you did. We only wish we didn’t have to lose you in the process.

Here is a list of resources for Indians and more resources for those abroad that will help you in case you think you or someone you know has depression.

If you or anyone you know is feeling suicidal, here are some more of the helplines available in India. Please call. 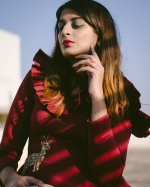 Award-winning fashion & lifestyle influencer since 2015. Writer since I was 10. Fierce. Colourful. Feminist. Connoisseur of all things beautiful. read more...