Gender identity is explored in many ways in our mythologies. It needs an astute understanding of body, gender politics and the ability to go deeper and deeper into your own personal and political to find stories to tell. And then, you need an artist of a certain capacity to build this with other people’s journeys in physical theatre.

We’ve carried our myths, traditions and stories with us. Those have propagated stereotypes in more ways than one. In times like ours, with paradigm shifts about the notions of roles, and a more dynamic understanding of power, what we need are new stories; new stories in art, culture and being.

When artists draw from their personal stories, the result is almost always more empathetic and much deeper. And to have a 14 year old think about gender identity politics and build it as art is gratifying. It is testimony to the power of art itself. Mauraya Sharma, who has conceptualised and co-directed this play, is a student with a keen interest in art.

The Two-Headed Lore is an attempt at understanding binaries – the day co-existing with the night, the masculine with the feminine. The play is about six folklores and myths, narrated by six actors, as stories arising from a restless night. And dissolving into each one’s personal narratives giving it an unexpected twist, a fresh perspective on the age-old endings.

Directed by Manjari Kaul, an exceptional theatre artist, who is willing to test the boundaries of theatre, narrative and body, this play promises to be insightful and engaging.

It gives me immense pride to see two fantastic artists collaborate, both of whom I have had the fortune of befriending and working with when we were all discovering theatre at Miranda House. Swati S. Mittal Suri is the production designer for the play. A gold medalist and introspective thinker, she brings her own indelible stamp to anything she touches.

So, for those of you in the NCR region, do come over tomorrow and day after to watch the meetings, of these confluences. Here is where you can find tickets. 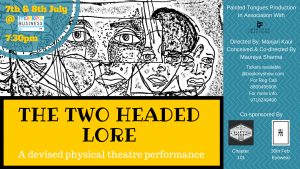 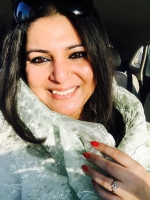