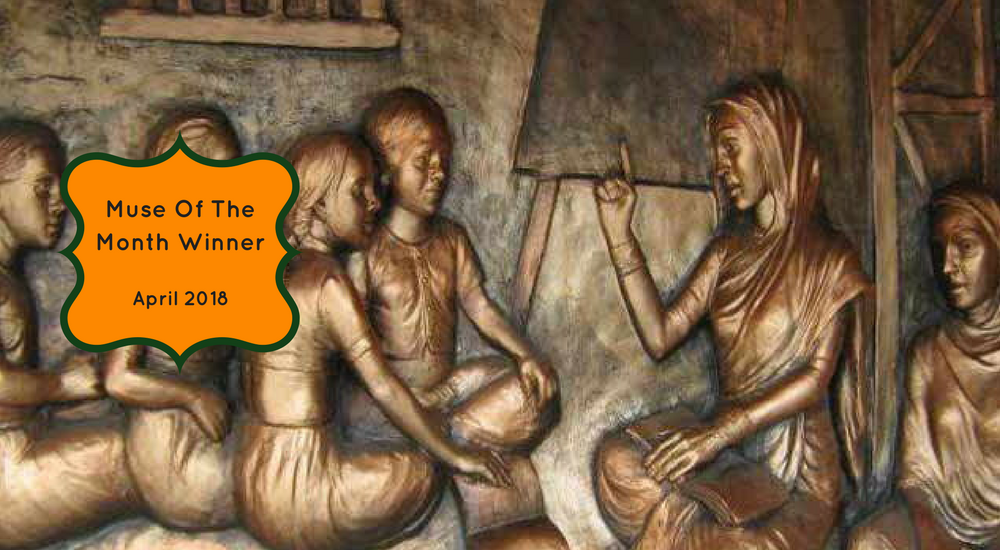 Furthermore, if they sighted her, they might blame her for any calamity that would befall them during the entire day as the mere sighting of a widow was considered inauspicious.

The first winner of our April 2018 Muse of the Month contest is Ujwala Shenoy Karmarkar.

Dawn was breaking as Chinmayee milked the cow and cleaned the shed. As she extinguished the lantern and hung it on a peg on the wall, she recollected that her teacher Anu-tai, had said that the city of London was so modern that its’ streets and some of its’ homes were lit up after dark by a new invention called gas-lights. The lights were apparently so bright that one hardly needed to carry a lantern at night. A concept that had left all the students awe-struck. Looking around the gloomy interior of the shed, Chinmayee wondered when her city, Pune would be so fortunate.

“Chinoo! Come quickly” Her mother’s voice now shook her out of her daydream.

Setting the pail of milk near the kitchen door, Chinmayee hurriedly washed her hands.

As soon as she had woken up that day, Chinmayee had bathed by drawing water from the well and quickly dunking the cold water all over herself, her teeth chattering uncontrollably in the chill winter air. This was her version of a bath, as she was not permitted to use the hot water that flowed from the copper “bamb” or heater which was kept in the courtyard.

Entering the kitchen was forbidden for Chinmayee. Stale Bhakri (bread) and a cup of hot tea had been placed on the verandah outside the kitchen far away from prying eyes. She wolfed down the food, dipping pieces of bhakri in the tea to soften it. Two of the bhakris had been carefully tied up in a piece of soft cloth for her to carry to school.

She could barely hold in her excitement. Today was a special day in school. She rushed to the room next to the cowshed that was hers. The room was bare as befitted a widow. A rattan mat on the floor to sleep on, a few copper vessels, a rudimentary hearth for cooking one meal a day and an earthen pot to store drinking water.

She plucked her sari from the previous day off the clothes line where it was drying, grimacing as she realised that it was still damp, the winter air having prevented it from drying to a crisp. But it would have to do. She had no choice. She had worn it yesterday and had washed it in the evening after some passer-by had lain in wait and had tossed cow-dung at her while she was returning home from school.

She folded the precious sari and tucked it in her school-bag. Every girl-student studying with her carried similar insurance, as one never knew when someone would fling some refuse, dirty water or dung at them. Their crime being that they were girls who attended Savitri Phule’s school for girls.

Chinmayee said a quick prayer hoping that her mother would not delay her. Her chores had been completed. She had woken up an hour before the cockcrow to ensure this.

She waited at the kitchen door impatiently hopping from foot to foot. Her mother came out and furtively handed her a small packet.

“Laadoo ahet.(these are laddoos, a sweet). You should have something sweet today. It is your twelfth birthday. Share with your friends.” she said, her hand lovingly touching Chinmayee’s hand as she handed it over. It was a forbidden touch, as a widow touching or being touched by any person, even her own family was prohibited.

Tears stung Chinmayee’s eyes as she bent to take her mother’s blessing, taking care not to actually touch her mother’s feet. Her mother, however, once again touched Chinmayee, this time on her head, her hand trembling slightly as she caressed the stubble on Chinmayee’s almost bald head. Cutting of hair was another custom that widows had to follow.

“Take care.” Her mother called out as she left.

Chinmayee wrapped her sari tightly over her head so that only her face was visible, and tucked in the loose end, holding her schoolbag close. As she left her home by the backdoor, the stench from the Mutha river rose in the early morning air and pierced the fog that was dispersing in the weak wintry sunshine. She fixed her gaze on the ground and took care to walk close to the overflowing roadside ditch and in such a way that her shadow would not fall on any passer-by. Although her school was a short distance away, each step was fraught with potential trouble. In Chinmayee’s case, her crime was double-fold as she was ‘Learning In A School’ as well as a Widow! She was lucky, she thought, that her eldest brother who had returned from his studies abroad had put his foot down and enrolled her in the school opened by Savitri-tai.

The narrow road was almost deserted, except for the people carrying away the night-soil who avoided her and some soldiers on horseback from the nearby Army cantonment who ignored her. As she hurried along, the inmates of the houses around her were stirring and waking. Any of them were capable of teasing, tormenting or troubling her. Furthermore, if they sighted her, they might blame her for any calamity that would befall them during the entire day as the mere sighting of a widow was considered inauspicious.

She was inured to the heckling voices and insulting comments now. Even the refuse and dung thrown at her hardly bothered her. It was a small price to pay for learning so much about the world around her. For example, she knew that the earth was round and that the Gora people who ruled Pune were called Englishmen. Their ruler was a Queen called Victoria. She knew that there were many countries in the world, some across the huge ocean, many inhabited by people who were very fair with light hair, while some had very dark-complexioned inhabitants! She could write, and solve mathematical problems. She could read complete stories out aloud. And very well, too. Anu tai, her teacher had, in fact commended her for her reading skills just the other day.

Today, however, was a very special day. Savitritai Phule , the founder of their school would be visiting and meeting them personally. Each of the fourteen girls would either recite a poem or story or even a mathematics table to show her how much they had achieved in the past few months.

Savitri -tai would stay and share their lunch with them before she left in the afternoon.

The air was crackling with excitement as the girls assembled in the central courtyard of Anu-tai’s house which also functioned as their school during the daytime. Savitri-tai and Anu-tai smiled at the eager faces around them.

Savitri-tai said, “I have been communicating with the education department in Bombay. And I can proudly tell you that from next year, any of our girl students who are eligible can appear for the high school and matriculation exam. We have the required permission.”

The girl sitting next to Chinmayee burst into tears. She was a thirteen-year-old girl named Parvati.

Anu-tai asked, “Kaay jhala, Paru? What is the matter?”

“Tai, by this time next year, I will no longer be in Pune with my parents. I have been married for four years now. My in-laws have been corresponding with my parents and they are keen to have me stay in my marital home at least by Gudi Padva next year. I doubt that my in-laws will ever permit me to study further.” came the tearful reply.

Parvati was one of their brightest students, and everyone was in awe of her mental skills in arithmetic. Anu-tai looked downcast at the thought of losing one of her best pupils. A pall of gloom settled over them all.

Savitri-tai cleared her throat loudly. Her face was calm, but determined.

“Children! Knowledge and education are never wasted. Keep learning. One never knows what the future may hold for us. Keep trying to convince your family. You might have the good fortune of being married to a man who values education. I was illiterate when I married. My own husband encouraged me.”

Chinmayee looked into Savitri-tai‘s eyes. And softly asked the question that had plagued her for many weeks now.

“Tai, these Englishmen who rule over us are themselves ruled by a woman, a queen! Their women can read and write. Their widows live in the same house and eat the same food as the rest of their family! So…..will there come a time in our land when women will be free to study if they so choose …..and not be ridiculed or tormented for it? Will they become teachers, lawyers, doctors? Will there come a day when a widow like me will not be treated like an outcast and be able to live, eat, breathe and walk ….like a normal person? “

There was a collective indrawing of breath from the girls. The question, although bold and audacious was a reflection of their innermost wishes, their secret desires.

Savitri-tai paused. “Chinmayee, I do not know the answer to your question. All I can say is that we can only try and hope and pray. We make slow progress…a step at a time and then another…..and keep moving closer to our goal. Maybe all we do is pave the way for others. Someday, sometime, perhaps not in our lifetimes, the women of our land will be free to make their own choices, and be acknowledged as equal to the men.”

Chinmayee nodded, hope soaring in her heart.“Yes, Savitri-tai. I pray to god that someday, this will come true.”